United-Continental: is bigger better, or does it just take longer to burn?

Much of the current analysis of recent mergers focuses almost entirely on their domestic implications. But increasingly this becomes a domestic/international equation. That’s what has changed over the past decade, as new entrant and low cost airlines have plundered the US domestic market. The strategic relief for legacy airlines therefore becomes increasingly their international linkages. These both deliver better yields (especially while the US dollar is low) and feed into domestic operations. The bigness factor is most powerful in international markets – where global alliances become now a key weapon.

In favour of being big; playing to the strengths. International routes and global alliances are important drivers

The alliances are breathing new life (= market power) into the old legacy models. In that respect big can often be better, as the large carriers piggyback on the alliances. How things have changed! It’s not so long ago that Star members used to joke about United not even knowing the alliance existed – despite leading it with Lufthansa.

The European airlines, with intense international competition from a host of neighbours, have always been much more aware of the advantages that the alliances can deliver. As US legacy carriers look increasingly to the international markets for their competitive edge, it is those alliances that provide them with marketing and sales opportunities that are not available to their domestic low cost competitors – yet.

Over the past decade, as US majors have shrunk domestic capacity in a bid to achieve profitability, their international revenues have expanded. Most notable of these growth profiles is Delta, with Continental and American also most aggressive in their expansion. The percentage figures shown in this graph do not reflect actual market size of their operations, but do clearly illustrate where each airline’s strategic shifts have occurred.

In terms of international growth, United is a standout, having barely budged from its one-third contribution over the ten years. Its new partner, Continental, has by contrast, expanded from a 28% contribution from international up to nearly 41% over the period. This merger consequently promises United some new advantages internationally. 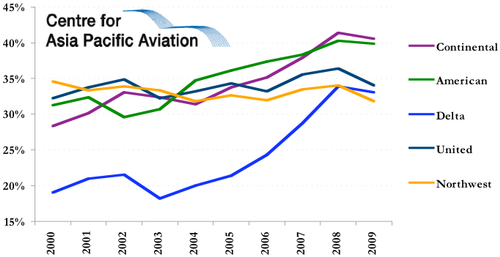 Not all of the carriers have followed the same geography however. American’s major proportionate expansion in revenues comes from Latin American growth. 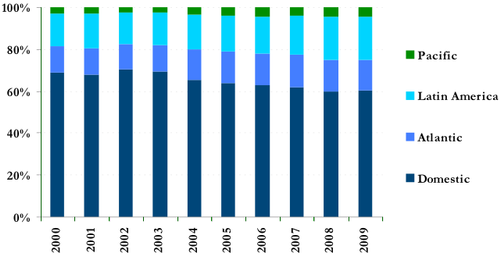 Continental’s is more broadly spread across each of the main regions, with the Atlantic/European routes increasing most notably. 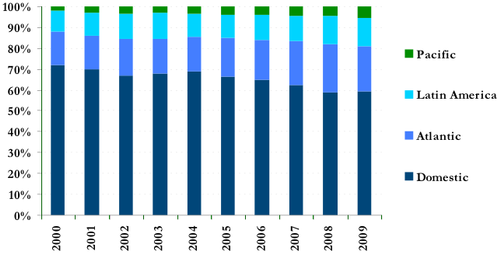 And Delta (with Northwest’s revenues integrated back to 2000) has shown the largest growth on Atlantic markets too, with the predominantly Northwest revenues on the Pacific remaining relatively steady over the period. 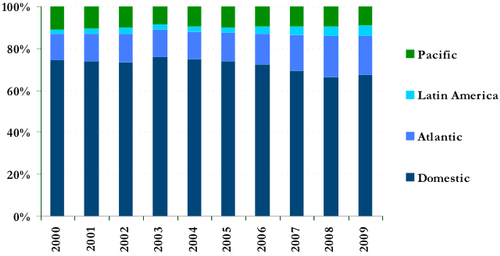 The consensus on the Delta/Northwest merger is twofold: it has – so far – been a success, but final judgments are premature. Obvious potential advantages of a domestic “merger of equals” of this nature is in reducing competition and in allowing for rationalisation – for which, read downsizing from the aggregate levels.

But that is before satisfying all unions, working out pilot seniority and combining fleets. Each of these requires massive amounts of management time, the likely imposition of restrictions on planning freedom and, on the bottom line, added unit cost as salaries increase. Then there is the massive but generally overlooked task of combining information technology systems. This latter often slips under the radar because it is simply too hard. But recent months have seen it coming to the fore, for example as LCCs strive to intrude on the territory of full service airlines, with enhanced connectivity and greater data mining.

As United/Continental leapfrogs Delta/Northwest to become the largest world airline, is there a way of measuring who is best, as well as biggest? Or are they coming to mean the same thing?

In terms of US domestic hubs, United now jumps to the front. It will have ten.

However, what an airline describes as a “hub” might be little more than a marketing description. At Los Angeles, the pre-united United had a 17% domestic market share, just edging out Southwest and American with 15% each. Adding Continental will increase that somewhat, but will still give United far less clout than is evident at other hub cities.

The same dubious status applies to Cleveland, Cincinnati and Phoenix, where being dominant (or close to dominant) is different from the kind of operational focus seen at Chicago or Philadelphia.

Asian market penetration; a plus for Star Alliance

This major growth area for the next decade has to be a key part of any US airline strategy.

Noteworthy for the new United is the integration of Guam, which adds a regional piece to the already strong United presence in the market. As shown in our recent examinations of the shrinking of JAL, oneworld will be the loser in this geography with both United and Delta having noteworthy advantages.

If, as expected, a joint venture is established across the Pacific with ANA – that anti-trust immunity application is currently being reviewed - United and its Star partners will pull further ahead.

In Europe, the game changes. Until now, United’s European presence has been focused and limited. Meanwhile, Continental, like Delta and American, has built a broad network of primary and secondary European cities, served primarily by B757s.

The old United network will be substantially increased by the addition of these points. The merger also adds a second East Coast departure point, at Newark.

It will be interesting to see if the “more with smaller” network structure, contrasting with United’s hub/widebody approach, will now spread to places like Chicago and Dulles, reflecting a Continental worldview, post-merger.

Delta and its SkyTeam partners have a clear edge to Africa, both in operated routes and planned services. This is still a small market, but it is often relatively high yielding – especially where there is a monopoly. Delta’s service to Africa is well ahead of its competition and on a par with access not seen since the days of Pan Am.

The difference now is that many of those resource rich markets are now showing strong signs of financial growth.

United has just announced its intention to serve Lagos, but the start date is still awaiting government approval and the airline has, as yet, not indicated that other African points are under consideration. Star partners South African, Egyptair and SN Brussels, however, as well as Lufthansa, provide the new United with ample points of connection.

Thus far, Continental has focused on India, with nonstops from Newark to both Delhi and Mumbai while the pre-merger United has focused on the Gulf. Delta operates to both Amman and Cairo with its own equipment and serves Mumbai via Amsterdam from Atlanta. American, with a single flight from Chicago to Delhi, lags both Delta and the newly combined United. 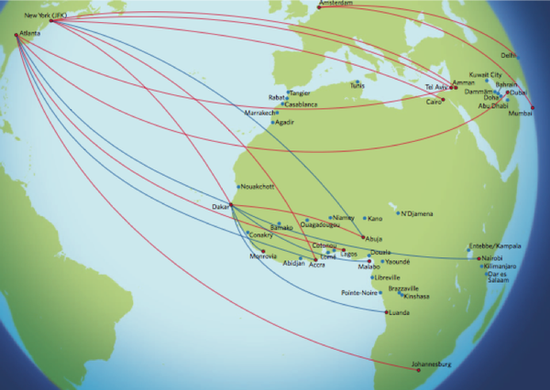 The addition of Air India to Star and Kingfisher to oneworld may eventually alter the balance once (or if) these airlines are able to prosper, giving American more of a presence in the market and offering more onward domestic points to both groups.

Latin America; a big road to hoe, where American dominates

Both United and Star gained considerably from the switch of Continental from SkyTeam to Star. As can be seen by the combined route map, services to Mexico are considerably enhanced with Continental’s contribution, as are points in the western part of South America.

Should COPA eventually join Star and re-link with its long-time, and newly-married Continental partner, the Central American network would also be strengthened.

However, American continues to be the dominant force in the region. It operates a huge network with its own equipment - much of it over the vital Miami hub. The airline’s schedule integration with the LAN group adds to its position and the fact that its hubs are all centres of Latin focus; Miami, New York and Dallas, further benefits its position.

Certainly the new United will take its toll and help to somewhat level the competitive landscape, as will the entry of TAM into Star, but the dominance that American enjoys is not likely to be dislodged anytime soon.

And then there were American and US Airways

As with Delta-Northwest, this merger between United and Continental involves airlines that share alliance ties, thus avoiding any imbalance in the overall global picture. But the reach of the newly formed carrier is significantly increased and the domestic stakes are raised as the new United battles the new Delta for top-of-the-heap bragging rights.

Though claiming otherwise, American and US Airways are each challenged in significant ways. But for them, any possible combination will have the added complexity of different alliance affiliations – not a big consideration in the past, but a real one today.

If the near future skyscape is composed of United, Delta, American and US Airways, the latter is the big loser in the transaction. The airline has no presence in the Pacific and very limited operations to Europe and South America, all of which are at risk due to Philadelphia’s proximity to Newark.

Not only will US Airways’ domestic presence be diminished, but also its contribution relative to Star and its global network will also be further marginalised. There has been talk of an eventual three-way combination that would join US Airways to the new United and that possibility exists. However, in such a combination, Philadelphia and Charlotte would likely be junior hub partners, trailing both Newark and Dulles in development.

For American there are issues too. oneworld is further disadvantaged by the United merger and American now faces a very different domestic landscape - especially with regards to corporate global contracting. Any possible combination with US would bring additional strength in the East. But it would not solve the carrier’s weakness west of the Rockies. Perhaps the heat would be turned up on an American/Alaska combination that could improve American’s presence in the West.

For a tough talking independent American Airlines, helping accelerate the demise of US may be a preferred option to trying to merge.

Will the merger work out? Previous alliance relationships help smooth a transition

While it is a major development in the US domestic market, the service effects will be less evident than would have been the case in pre-alliance times. United and Continental have already had a very close cooperation prior to merger (a point in favour of a relatively painless merger) and the biggest customer change will be seen in their operation as one brand.

Also, the merger has created a carrier with geographically diverse hubs allowing the most balanced domestic network; with strong operations on both coasts and over a north-south axis in the Midwest.

We have, for some time now, lived in an aviation world that has predicted benefits from consolidation. One more important step has been taken and, if the fewer-is-better theory is true, things should begin to look up. All they have to do now is implement the combination. And near term profitability is still a challenge.