North and South American carriers stocks tumbled on Thursday (17-Dec-2009), in line with the wider market, as jobless claims rose for the second consecutive week. As a result, the AMEX Airline Index fell 2.2%, as the Dow fell 1.3%. The fall in stock prices occurred despite a 1.0% drop in oil prices, to USD71.96.

United Airlines (-1.0%) stated it expects 4Q2009 unit revenue to fall by 6.25% to 7.25% year-on-year. Unit costs are expected to fall by 7.9% to 8.2%, (excluding profit sharing and some hedging impacts). Mainline unit costs excluding fuel are expected to rise by 1% to 1.5% year-on-year. The airline is reducing capacity in the quarter by 3.3% and expects demand to be flat, implying higher load factors. The carrier expects to end the quarter with USD3 billion in unrestricted cash, up approximately USD500 million from 30-Sep-2009, and excluding USD250 million from financings completed in 4Q2009.

American Airlines (-3.1%) meanwhile forecasts a 4.5% to 5.5% year-on-year fall in 4Q2009 unit revenue, while cargo and other revenue for the quarter is expected to increase 0.2% to 1.2% year-on-year. Avondale Partners stated the carrier’s forecast reflects the US airline industry’s recent trend of "easing revenue erosion" - see related report: Marked improvement in US domestic yields in November reflects improving economy

Executive Vice President and CFO, Alan Graf, stated that the company's balance sheet remains strong, while volumes are growing, and FedEx is "encouraged by our performance as we emerge from the worst economic downturn in FedEx history". He added, "while there is some uncertainty regarding the sustainability of current demand trends after our peak shipping season, we expect our strong operating leverage to provide improved year-over-year profitability in the second half of our fiscal year. Effective cost management remains a priority and should continue to benefit results”.

TAM back to earth

TAM (-8.5%) meanwhile took the biggest fell of the day, as investors digested news it plans to sell its revamped Multiples SA loyalty programme business in an IPO. It follows a big rise in its stock on Wednesday.

Southwest (+0.8%) and Republic Airways (+0.4%) were the only carriers to see improvements in share prices at the end of trading yesterday. 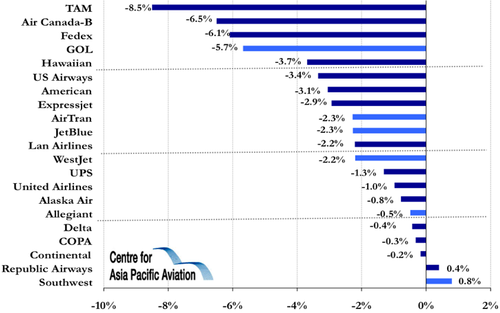