Western sanctions against Russia in opposition to the invasion of Ukraine are having a significant impact on aviation. Russian airlines are facing important and growing restrictions on their ability to operate, not only in international markets but also domestically.

All three leading GDS companies – Sabre, Amadeus and Travelport – are suspending Aeroflot from their distribution systems. Moreover, Russia's two leading airlines – Aeroflot and S7 – are suspending international flights in light of the possible impounding of leased aircraft by Western lessors, who are required to terminate lease contracts.

Foreign lessors – led by AerCap – account for more than two fifths of all Russian operated aircraft. These lessors may face significant logistical challenges to repatriate their aircraft, with the risk that Russian airlines cease payments. Maintenance of Western aircraft will be an increasing challenge for Russian airlines as OEMs suspend the supply of parts and services.

According to the CAPA Fleet Database, Russian manufacturers account for 35% of the Russian fleet.

Sabre, Amadeus and Travelport suspend Aeroflot from their GDSs…

Companies that provide the world's leading global distribution systems (GDS) for the distribution of airline schedules are imposing penalties on Russia's leading airline. These go beyond the observance of government-imposed sanctions.

On 03-Mar-2022 Sabre announced the termination of its distribution agreement with Aeroflot. Sabre, which is based in Texas in the USA, added that it was "taking immediate steps to remove Aeroflot flight content" from its GDS.

Amadeus, based in Madrid, Spain, announced that it had "begun suspending the distribution of Aeroflot fares" in its systems. It added that it was assessing and evaluating "the potential impact of international sanctions imposed on Russia and any counter-measures by Russia".

On 7-Mar-2022 UK-based Travelport, the other GDS company of the big three, followed the other two in suspending Aeroflot sales from its platform.

…but some have suggested they are not going far enough

Both Sabre and Amadeus have attracted criticism from some figures within aviation for not going far enough and quickly enough.

Jonathan Hinkles, CEO of the Scottish regional airline Loganair, called Sabre's move a "half-measure" because it only stops Aeroflot's distribution to the Sabre GDS, but does not affect Aeroflot's PSS (passenger service system), which holds its bookings and seat inventory.

Former WestJet CEO Ed Sims said on social media: "Neither Aeroflot or S7 should have any ability to sell or operate through a PSS".

The majority of Aeroflot Group's inventory is domestic: 52% of its seats were in the domestic market in 2019, before the pandemic.

This rose to 75% in 2021; and 72% is currently projected for the first week of Aug-2022 by data derived from schedules filed with OAG (this does not yet reflect the suspension of international flights).

Its domestic inventory is sold within Russia through the local GDS, Sirena. This mitigates the impact on Aeroflot of denying it access to international GDSs.

Nevertheless, the total removal of Aeroflot content from international distribution channels would have a serious impact on the airline if it were still operating internationally.

Aeroflot and other Russian airlines are suspending international flights

However, the closure of much of the Western world's airspace to Aeroflot, and the threat of the impounding of aircraft leased from non-Russian lessors, has led the airline to suspend international flights form 8-Mar-2022 to all destinations apart from Belarus.

Russia's civil aviation authority, Rosaviatsiya, has recommended the suspension of international passenger and cargo flights by Russian airlines with aircraft owned by foreign lessors in nations that now ban the leasing of aircraft to Russia or where airspace is closed to Russian operators.

Western lessors are required to recall their aircraft – a major challenge

Sanctions imposed by the EU prohibit the sale, supply, transfer or export of aircraft and components to Russia. This covers leasing.

EU sanctions require the recall of aircraft leased to Russian operators by their owners by 28-Mar-2022. This presents significant logistical challenges to lessors concerning how this can be effected in practice.

The return of leased aircraft is usually planned with a lead time of several months, or years. It is not usually complicated by airspace closures or the possible replacement of engines and other equipment with substitutes by airlines denied access to the proper parts.

Moreover, the termination of lease contracts by lessors lets operators off the hook for lease payments and aircraft maintenance, further adding to the challenges faced by owners.

It has been suggested that the Russian government could possibly buy leased aircraft from foreign lessors. However, this would be severely hindered by the freezing of Russia's foreign currency reserves as a result of sanctions.

A worst case scenario for Western lessors would involve the forced purchase of their aircraft, but with no payment from the Russian government. Logically this is unlikely, as it would jeopardise the airlines' long term relationships very negatively. But then the Ukraine invasion is hardly logical either.

According to the CAPA Fleet Database, there are a total of 1,324 aircraft of all types and roles with Russian operators as at 7-Mar-2022.

Of these, 925 are leased, including 577 owned by lessors outside Russia.

Leased aircraft from international lessors, therefore, account for 44% of the total fleet of Russian operators.

All aircraft with Russian operators: numbers owned and leased, 7-Mar-2022 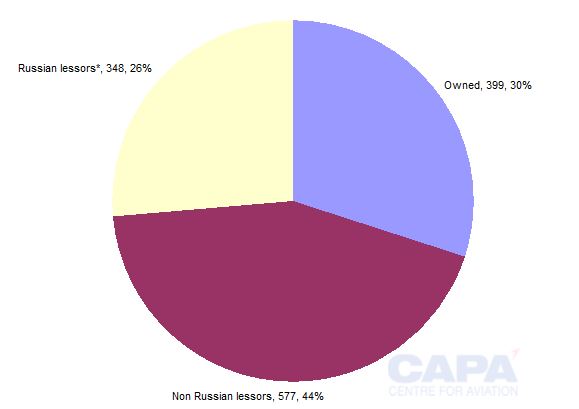 AerCap has the most aircraft leased to Russian airlines

AerCap, the world's largest lessor, has the biggest exposure by number of aircraft leased into Russia by non-Russian lessors, with 146 aircraft (source: CAPA Fleet Database).

The second biggest exposure is SMBC Aviation Capital, with 36 aircraft.

BOC Aviation and Air Lease Corporation each have 23 aircraft leased by Russian operators. 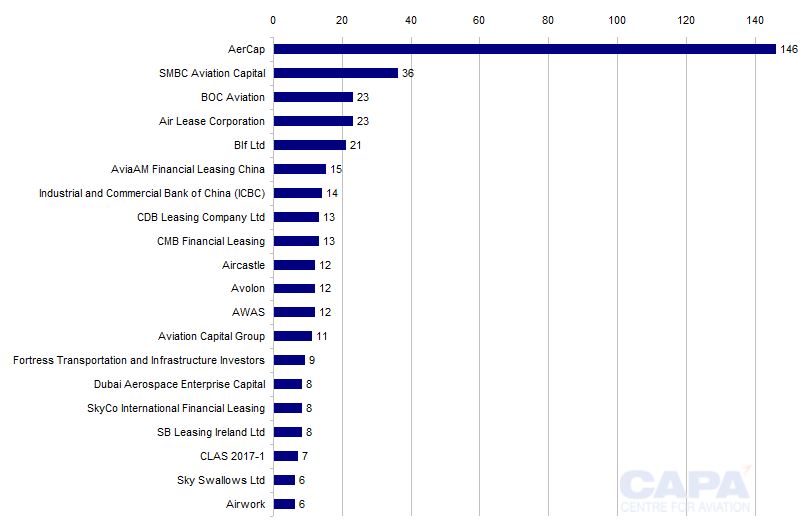 *Only the top 20 by number of aircraft in Russia are shown.
Source: CAPA Fleet Database.

Maintenance of Western aircraft is now a challenge for Russian airlines

A further challenge now faced by Russian operators is the servicing, maintenance and insurance of their foreign aircraft, whether owned or leased.

EU sanctions explicitly prohibit the provision of these services to Russia, while US export restrictions are expected to limit the ability of Russian operators from obtaining aircraft parts.

Both Airbus and Boeing have halted the supply of spare parts and services to Russia's airlines operating their equipment. The regional jet manufacturer Embraer is also reported to have stopped supply.

There are 347 Airbus and 380 Boeing aircraft with Russian operators

The CAPA Fleet Database records 347 Airbus and 380 Boeing aircraft with Russian operators, accounting for 727 aircraft between them. This is 55% of the total fleet of 1,324 (and 67% of the 1,084 jet aircraft operated in Russia).

There are 41 Embraer aircraft and 50 Bombardier aircraft with Russian operators, according to the CAPA Fleet Database.

Russian manufacturers account for 460 aircraft in the country, or just 35% of the total.

Other OEMs, including the engine suppliers Rolls-Royce, GE Aviation and Safran, are also ceasing support services to Russian airlines for the time being.

The suspension of parts and services from OEMs will lead to the gradual erosion of Russia's airlines' ability to fly non-Russian aircraft.

The fallout from Russia's invasion of Ukraine is having a significant impact on aviation, in particular on Russian airlines and on foreign lessors.

For Russian airlines, many of whom have already suspended all or most of their international flights, the impact could be much more painful.

Although domestic networks form the larger part of their operations, their ability to operate even on domestic routes will be severely compromised by a lack of maintenance support from foreign OEMs and the termination of leases with foreign lessors.

The longer the conflict and sanctions last, the worse the situation will be for Russia's airlines.