On 11-Oct-2019 Dart Group highlighted positive trends in later season bookings for its leisure travel business, with demand strengthening for both Jet2.com, its low cost airline, and its package holiday company Jet2holidays.

Dart Group also highlighted increased demand since Thomas Cook Group's collapse in late Sep-2019. According to CAPA analysis of OAG data on flights scheduled for the week of 23-Sep-2019 (the date of Thomas Cook's liquidation), the overlap between Jet2.com and Thomas Cook Airlines was significant. One third of Jet2.com's routes and 42% of its seats were on overlapping routes.

Dart Group now expects its profit in the year to Mar-2020 to be higher than previous market expectations. Nevertheless, it is maintaining a more cautious longer term outlook, due to travel industry cost pressures, GBP weakness and Brexit uncertainty.

This report analyses the network overlap that existed between Jet2.com and Thomas Cook Airlines.

One third of Jet2.com routes and 42% of its seats in direct competition with Thomas Cook Airlines

In capacity terms, the overlap was greater. Thomas Cook operated on routes accounting for 42% of Jet2.com's seats in that week, while the overlap covered 49% of Thomas Cook's seats.

Jet2.com had more capacity than Thomas Cook on 69 of the 106 overlapping routes.

Jet2.com and Thomas Cook Airlines: percentage of seats and routes on routes also operated by the other, week of 23-Sep-2019 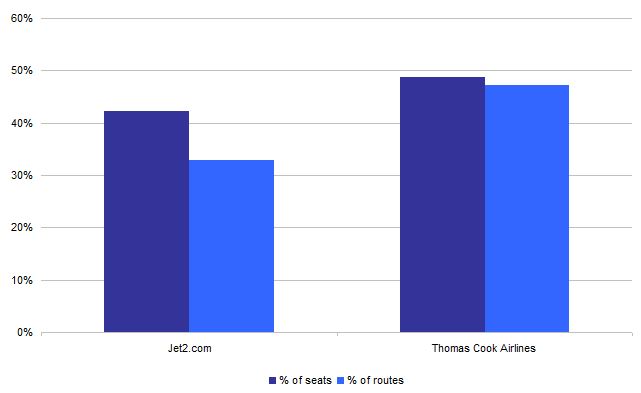 Jet2.com: top 30 routes by seat capacity; and Thomas Cook Airlines seats on those routes where it also operated, week of 23-Sep-2019 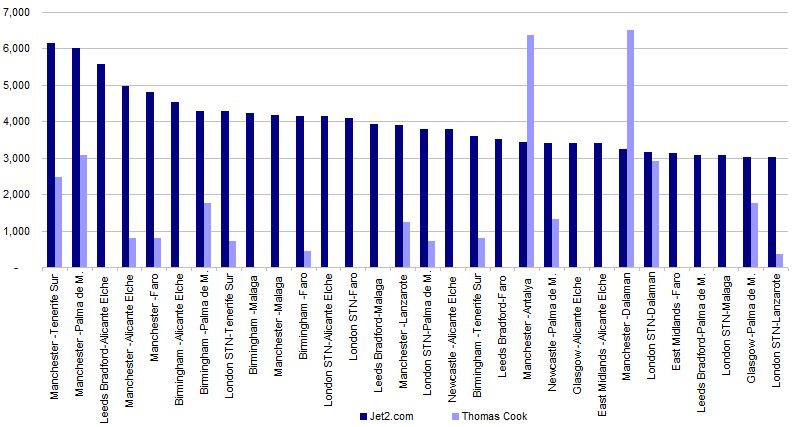 There were seven UK airports where the two airlines had overlapping routes.

The airport where Jet2.com had the most capacity on routes that were also operated by Thomas Cook was Manchester. Here it deployed more than 63,000 seats on 29 routes in direct competition with Thomas Cook, accounting for 15.5% of Jet2.com's total capacity and 36.7% of its overlapping capacity.

The next biggest airport for Jet2.com capacity on routes overlapping with Thomas Cook Airlines was Birmingham, where there were 21 head to head routes, accounting for 8.2% of Jet2.com's total capacity and 19.4% of its overlapping capacity.

The remaining five UK airports, ranked in order of Jet2.com capacity on routes that were also operated by Thomas Cook, were London Stansted, Glasgow, East Midlands, Newcastle and Belfast International (see chart below).

At Stansted and Glasgow Jet2.com had a similar number of seats overlapping with Thomas Cook, but achieved this with only nine routes at Stansted versus 17 at Glasgow, highlighting the higher average capacity on its routes from the London airport. 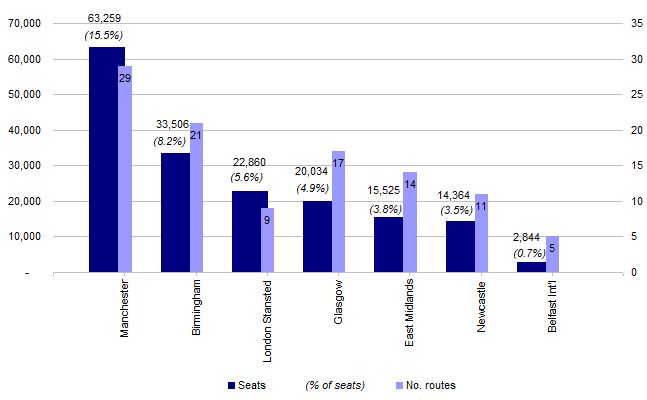 There were 29 airports outside the UK where Jet2.com and Thomas Cook Airlines had overlapping routes.

The biggest of these for Jet2.com capacity overlapping with Thomas Cook was Palma de Mallorca, where it deployed more than 23,000 seats on six routes in direct competition with Thomas Cook, accounting for 5.7% of Jet2.com's total capacity.

Of the non UK airports with overlapping routes, 11 of the 29 were in Spain, six were in Greece, four in Turkey, two in Cyprus and two in Croatia, and there was one in each of Italy, Malta, Portugal and Bulgaria (see chart below).

Jet2.com has benefited from growth in package holiday sales

Jet2.com did not only compete with Thomas Cook for airline ticket sales, but also for package holiday sales in the UK. 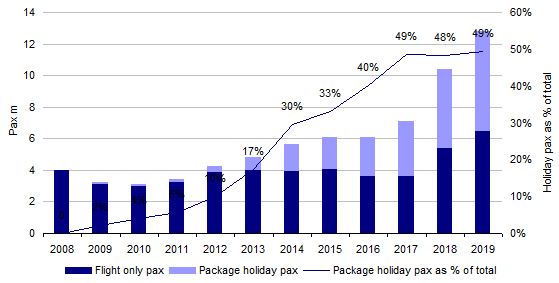 This illustrates the successful adoption of a strategy to move the business away from a reliance on seat-only sales, which compete directly with other LCCs.

In particular, Jet2.com faced (and still faces) strong competition from the ultra LCC Ryanair and from easyJet, which are the biggest two low cost airlines in Europe and which have massive pan-European networks from the UK.

Jet2.com, although broadly competitive with easyJet in terms of its unit cost, cannot match Ryanair's CASK and always offers a much more leisure focused and seasonal niche network of destinations – mainly in Mediterranean summer sun markets.

Jet2.com moved its business to embrace a significant proportion of in-house package holiday sales just as the major European tour operators such as Thomas Cook Group were moving their airlines away from pure charter so that their own package holiday business could embrace seat-only sales.

A major difference is that Thomas Cook had an expensive high street retail distribution presence, whereas Jet2.com and Jet2holidays rely on the much more cost efficient online sales channels.

Jet2.com/Dart Group do not report monthly traffic figures, unlike most rival airlines, but its annual figures demonstrate the huge impact that its package holiday business has had on growing the airline and on growing the group's revenue and profit.

Dart Group revenue, dominated by its leisure travel business (it also has a small cold storage and distribution business), grew by seven times from FY2008 to FY2019 and the group has remained profitable throughout.

Jet2.com will feel the benefit of Thomas Cook's exit, but still has challenges ahead

Dart Group will report results for the first half of its FY2020 financial year (six months to Sep-2019) in Nov-2019 and this will include Jet2.com traffic data for the half year. This will be the first opportunity to see the impact of Thomas Cook's demise in Jet2.com's numbers.

However, as the above analysis illustrates, the collapse of a rival that competed on 33% of Jet2.com's routes, involving 42% of its seat capacity, and which also competed for package holiday sales, is bound to have a significant positive impact.

Dart Group's challenge will be to maintain the positive momentum in the face of the challenges posed by cost pressures, the weakness of GBP, and Brexit, in addition to unrelenting competition from rivals such as Ryanair and easyJet.