The UK's reintroduction of travel restrictions on Spain raises fears that restrictions could also return elsewhere in Europe.

Meanwhile, Ryanair's recent quarterly results highlight two big disconnects: between an airline's filed schedules and its announced capacity guidance; and between the pace of return of capacity and demand.

Based on filed schedules, Europe's total capacity is 14.6 million seats for the week commencing 27-Jul-2020, the highest since mid Mar-2020. The year-on-year reduction of 60.3% is the narrowest since mid March.

Capacity derived from filed schedules projects European seat numbers at 51% of 2019 levels in Aug-2020 and 73% in Sep-2020. Even before the increased hurdles to UK-Spain travel, let alone any more widespread restrictions, these numbers are ahead of likely capacity plans and far in excess of likely demand.

Total European seat capacity is scheduled to be 14.6 million in the week of 27-Jul-2020, according to schedules from OAG combined with CAPA Fleet Database seat configurations.

This week's total is split between 5.4 million domestic seats, versus 7.8 million last year; and 9.2 million international seats, versus 28.9 million.

Europe's domestic seats are down by 31.4% year-on-year (compared with last week's -36.3%). This is now the fifth week running with domestic capacity at more than 50% of last year.

The 60.3% year-on-year cut in total seats this week is the 19th week of very heavy double digit percentage (more than 50%) declines in seats.

However, it is 3.5ppts narrower than last week's 63.8% drop and the eighth consecutive week of year-on-year cuts at a lower percentage than the previous week.

Europe once more has the third narrowest cut among world regions this week, for the fourth week running. This contrasts with the early weeks of the crisis, when Europe had the deepest cuts.

Seats are down by 74.5% in Latin America, returning it to the bottom ranking among world regions as having the deepest cut. Over recent weeks, Latin America has been swapping places with Africa, whose seat numbers are down by 71.5% this week.

Asia Pacific has now had three consecutive weeks at more than 50% of last year's capacity. 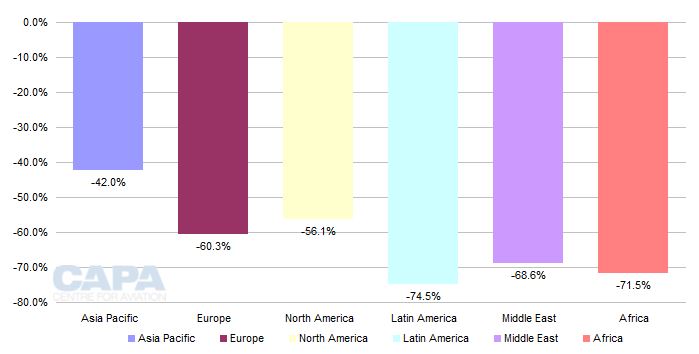 Year-on-year rates of capacity reduction in Asia Pacific, Latin America and North America have broadly levelled out this week.

By contrast, Europe, Africa and Middle East are reducing their year-on-year rate of reduction and growing capacity versus last week. 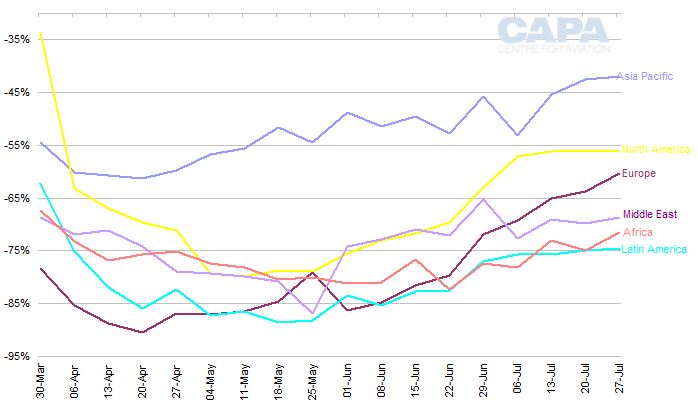 The trend of future schedules being trimmed with each passing week, briefly paused two weeks ago, continues this week.

With Jul-2020 now all but over, capacity implied by filed schedules data for the month has been cut by 68% year-on-year (compared with 65% projected last week).

As recently as late May-2020, capacity for Jul-2020 was projected to be down by only 9% – an illustration of how rapidly network planning has become very short term.

Projected capacity for Aug-2020 is lowered by 7% since last week and is now projected to be 49% below last year (versus -45% projected last week).

Projected Sep-2020 seat numbers are 7% lower than expected last week and are now anticipated to be down by 27% year-on-year (but this is still an unlikely 73% of last year's levels).

For 3Q2020 as a whole – normally the peak quarter of the year – European seat numbers derived from schedules filed with OAG are projected to be 49% below the same quarter of 2019, i.e. at 51% of last year's level.

…but there are more cuts to come

A further illustration of how planning has become very short term can be found in the capacity projections implied by schedules for the early part of the winter 2020/2021.

Capacity derived from OAG schedules for Nov-2020 and Dec-2020 is projected to be down by only approximately 10% year-on-year. This is virtually unchanged from what was projected last week or any other week over the past two to three months.

In other words, European airlines have not yet even begun to adjust their schedules to the heavily reduced demand environment that is likely to remain into the winter season. 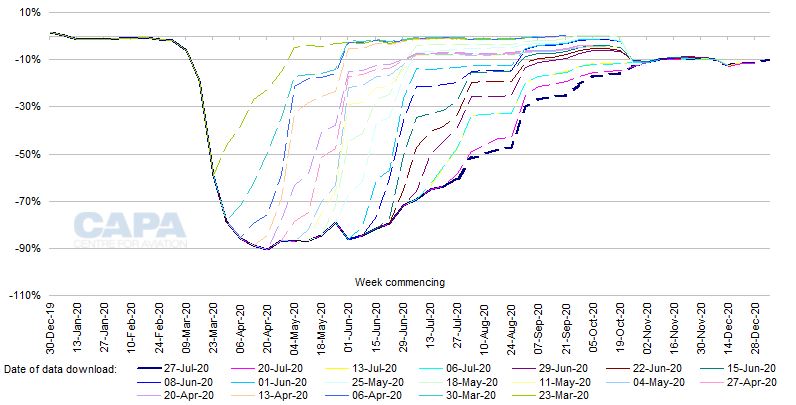 In some cases, schedules filed by airlines with OAG do not even reflect their own guidance about capacity plans.

…and between capacity and demand

Ryanair does not expect to fill the capacity returned to the market. Load factor was down by 35ppts to 61% in its March to June quarter of 2020, when capacity was a low single digit percentage of 2019 levels.

Ryanair currently expects to carry 60 million passengers in the year to Mar-2021 – only 40% of its annual total a year earlier.

Once more, this emphasises a recurring theme in CAPA analysis reports, namely that the outlook for aviation's recovery in Europe remains very uncertain.

The potential for changes to travel restrictions, which have recently been on a loosening trend, is a particularly important and unpredictable variable.

Following an increase in reported COVID-19 cases in Spain, some European countries have once more raised restrictions on travel to/from that country.

As of 25-Jul-2020, the UK is now advising British nationals against non-essential travel to mainland Spain, just as the heavily reduced holiday season was finding some momentum.

This travel advice did not initially apply to Spain's Canary Islands or Balearic Islands, where the incidence of the coronavirus is lower than on the mainland, but the UK included the islands three days later.

Travellers coming from all of Spain, including the islands, will be required to complete 14 days of self-isolation quarantine on returning to the UK.

The renewed restrictions were introduced with less than a day's notice. The quarantine requirement applies to those already in Spain and due to return after the change.

UK is biggest source of tourists to Spain

According to data from Spain's Ministry for Industry, Energy and Tourism and Instituto de Estadística, the UK is by far the leading source of tourist visitors to the country. 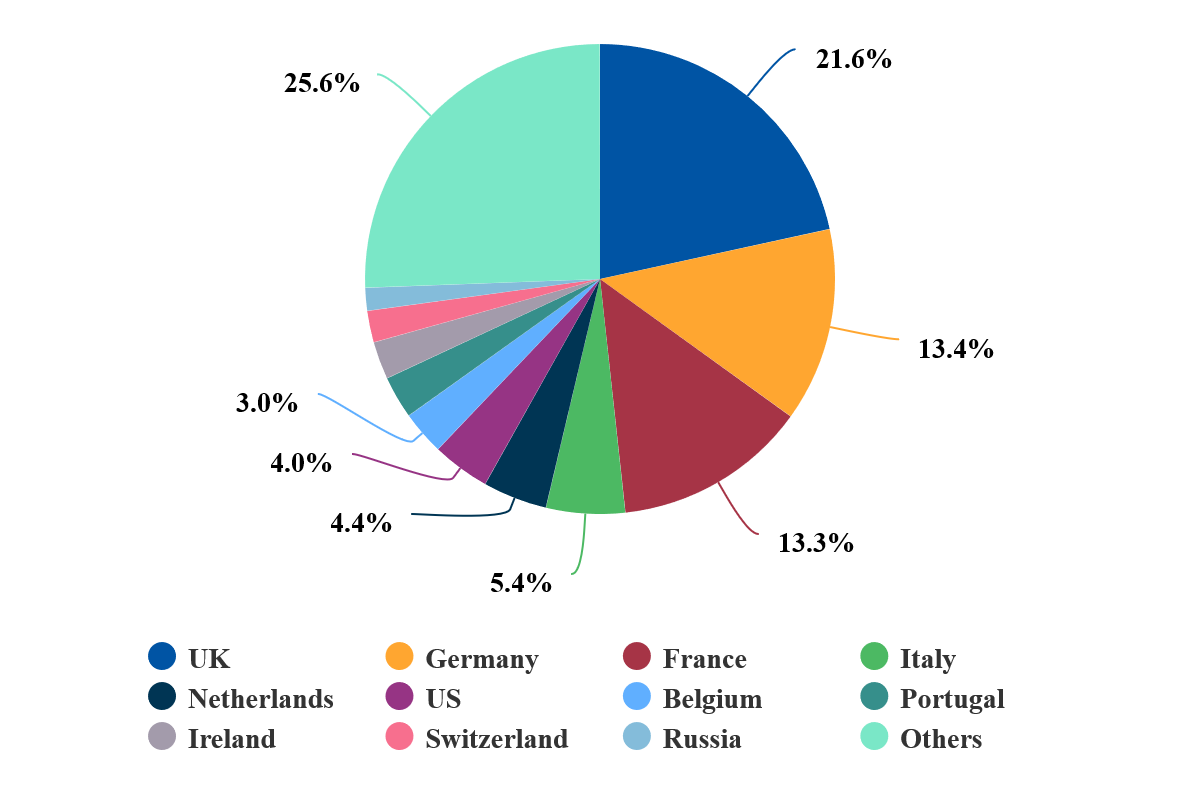 UK-Spain is Europe's biggest country pair by airline seats, which means that increased hurdles to travel between the two nations could have a noticeable impact on total European capacity.

The reimposition of quarantine requirements for travellers arriving in the UK from Spain, and the advice against non-essential travel to mainland Spain, are likely to have a negative impact on demand for UK-Spain air travel.

As a result, airline capacity plans are also likely to be reduced, although such changes are becoming increasingly short notice.

Some travellers may be prepared to endure the 14-day quarantine requirement on returning to the UK and so, airlines may keep schedules open for as long as possible, only cancelling flights at short notice if demand is insufficient.

Schedules to mainland Spain may more likely to be cut, given the UK government's travel advice, if the restrictions remain in place for an extended period, but even that is not certain.

Airlines have been reluctant to cancel flights where sales have been made, since they would then have to offer refunds to passengers.

They could also offer rebooking on other flights or vouchers for future bookings, but passengers would have the right to a refund, which would erode airlines' crucial cash positions.

TUI Group, Europe's largest tour operator, has cancelled all holidays for UK customers to mainland Spain until 9-Aug-2020, but its holidays to the islands will continue to operate.

Ultra-LCC Ryanair, Europe's largest airline by passenger numbers, has said that its flights to/from Spain will continue as scheduled. British Airways and easyJet will also continue to operate their Spain schedules.

LCC Jet2.com initially said it would continue flights to Spain, but reversed this when the UK extended its advice against travel to the whole country.

The fragmented, bilateral, nature of intra-European international travel restrictions is also illustrated by recent advice by France to its citizens against travel to Spain's Catalonia region, and Norway's decision to impose a 10-day quarantine on all arrivals from Spain.

Travel restrictions could rise once more in other parts of Europe

Less than a month after intra-European international travel returned to something like normality, at least in terms of reduced restrictions (if not in capacity or demand levels), uncertainty is rising rapidly.

The situation could become yet more challenging. Numbers of coronavirus cases have been taking an upward path in a number of other European countries recently.

Among Western Europe's large nations, rolling seven-day numbers have risen most sharply in Spain, but are also now on an upward trend in France, Germany and the UK, while they are no longer falling in Italy.

This raises concerns that the UK could potentially reintroduce quarantine requirements on travellers from other parts of Europe in addition to Spain, and/or that other European countries may seek to return to greater restrictions on a bilateral basis (whether or not they are EU members).

There have been reports of UK consumers cancelling holidays to other European countries for fear of reimposed quarantine restrictions.

On 17-Jul-2020, the first stock market trading day since renewed restrictions on arrivals from Spain were reintroduced, shares in European airline companies fell by between 5% and 10%.

This resurgent uncertainty will do nothing to rebuild the still very fragile consumer confidence in making travel plans. That confidence remains vital to the recovery in European aviation.