UK Government publishes call for evidence about its stake in NATS

The UK Government is taking another look at its ownership in UK air navigation services provider (ANSP) NATS, announcing a "call for evidence" over its stake. The ANSP, partially privatised in 2000, has been the subject of much debate over the past six months, concerning the ownership levels of the government and other partnersft6.

NATS is a public-private corporation, with 49% (plus a special share) owned by the UK Government, 42% controlled by a consortium composed of UK-based airlines known as the Airline Group and smaller shareholdings with the company’s employees (5%) and UK airports operator BAA (4%). Privatisation has been mooted for some time, but unions at the ANSP have shown opposition to the government diluting its stake, as has some members of the Airline Group.

This month’s call for evidence seeks stakeholder feedback on whether the protections available through legislation and the NATS licence, are sufficient to ensure the delivery of the UK’s overall aviation policy objectives on economic growth, environment, safety and security, independent of the government’s shareholding. Other issues such as civil/military cooperation and supporting the Single European Sky program also need consideration. Through the submissions, the government is seeking to determine and understand any impact that selling off its stake could have.

A stake sale or public offering of IPO could reportedly raise as much as GBP500 million, which the government would use to draw down public debt. In 2010, NATS made a profit of GBP78 million.

NATS is split into two units. NATS (En Route) is the regulated segment of the business. It is the sole provider of en route air traffic management services to aircraft within the UK and Eastern North Atlantic airspace, accounting for about of% of NATS’ business. NATS Services in unregulated and provides air traffic control services at 15 of the UK's major airports and Gibraltar.

The UK Government does not currently have the powers to sell shares in NATS below 49%. However, a provision exists to allow it to amend the Transport Act 2000 to allow it to sell shares below this level. Any decision to do so would need to be debated politically, in both houses of Parliament. The original move to partially privatise NATS in 1999/00 was hotly debated.

The Prospect union, representing 3000 air traffic controllers and other workers at NATS, has announced it will present a case against privatisation to the UK government.

Unions are not the only parties to object to further privatisation of NATS. In 2010, the UK government let it be known that it would decide whether to sell all or part of its stake in NATS, prior to the 23-Mar-2011 publication of the UK budget. The Airline Group consortium lobbied the government to maintain its 49% stake, or at the very least retain 25% ownership. Failing this, the urged that a government retain a golden share.

They argued that were the government to sell off its shares in NATS, there would be a risk that the UK would lose influence in Europe and over the planned Single European Sky programme.

Prior to the budget announcement the group – comprising British Airways, easyJet, Lufthansa-owned BMI, Monarch Airlines, Thomas Cook, TUI Travel and Virgin Atlantic – had been worried that the government would halve its stake in the enterprise. The consortium was also considering reducing its stake, although appears to be split over exactly where it wants to go.

UK underlying air traffic up 2.4% in May

NATS, the UK-based air navigation services provider, has reported the underlying growth in the number of UK flights was 2.4% year-on-year in May-2011. Unadjusted growth was up 6.1%, but the underlying figure was lower, thanks to the disruption caused by volcanic ash clouds in both years. 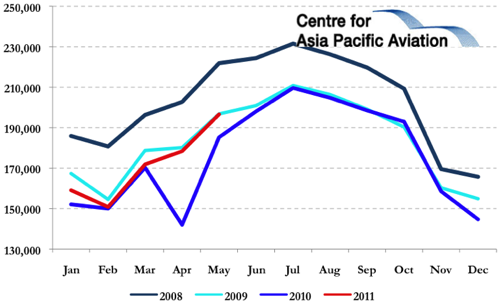 Flight traffic is now close to 2009 levels, although well below pre-financial crisis levels. However, airlines are flying larger and fuller aircraft into the UK, meaning the underlying health of the air travel market is slightly better than the aircraft movement figures alone would indicate.

Traffic at airports handled by NATS increased overall by 5.1% for May-2011. There was growth in all NATS markets, although domestic traffic was up a bare 0.3% and has been particularly sluggish for the year to day, growing only 1.3%.

Transatlantic arrivals and departures were up a healthy 8%, while flight levels in the important trans-Atlantic overflight market – one of the key indicators of the strength of the major EU-US air travel market – were up 12.7%. Other overflights were rose 9.5% compared to May-2010 levels.

The growth in traffic covered by the Oceanic Area Control Centre was particularly high in May-2011 – up 22.1% year-on-year - due to the comparison with a decreased 2010 figure, when flights were being rerouted due to the position of the ash cloud in Oceanic airspace in 2010.

European and other arrivals/departures – NATS’ largest market by a considerable margin - were up 7.1%.

Overall flight traffic movements for the year to the end of May-2011 were up 7.2%. Oceanic flights have shown the strongest growth, at just under 10%, while London Area Control was next strongest, at 8.1%. Trans-Atlantic overflights for the year to date are up almost 12%.