In Oct-2019 Air France-KLM and China Eastern announced that from spring 2020 Virgin Atlantic would be entering their joint venture agreement for flights between China and Europe.

Air France-KLM had already widened the scope of its partnership with China Eastern in Jan-2019. The addition of Virgin Atlantic to the JV reflects deeper ties following Air France-KLM's acquisition of a 31% share in the UK airline.

UK-China has been a strong growth market, with a number of new entrants and significant expansion by the market leader Air China. However, number two operator British Airways has shrunk in this market over the past three years. The JV with China Eastern gives Virgin an edge over its main UK rival BA and boosts Air France-KLM's position as the leading European airline group to China.

In the market to mainland China, Virgin Atlantic currently operates only London Heathrow to Shanghai Pudong, with a daily Boeing 787-900 service.

It competes on this route with British Airways' 10 times weekly service and with China Eastern's daily service, although the latter will become a partner rather than a competitor when the new JV arrangements come into operation.

For Virgin Atlantic Airways, China and Hong Kong make up its equal biggest market outside its trans Atlantic network to North America and the Caribbean. According to OAG data for the week of 11-Nov-2019, China/Hong Kong represents 5.6% of its seats and 26.4% of its seats to regions other than across the Atlantic.

This is the same proportion of Virgin's seat capacity as for India, where it serves both Delhi and Mumbai with daily flights (it only launched Mumbai in Oct-2019).

In ASK terms, China/Hong Kong is more important, representing 7.7% of its total ASK capacity (India is 5.7%) and 33.9% of its non-Atlantic capacity.

China Eastern and Virgin Atlantic's Shanghai-London services will be added to the existing Air France, KLM and China Eastern routes between China and France and the Netherlands.

UK-China seats have increased 2.5 times since 2012

Growth is slowing this winter, with capacity due to increase by 7.6% year-on-year (after 18% growth in summer 2019), but this is clearly a market with further growth potential. 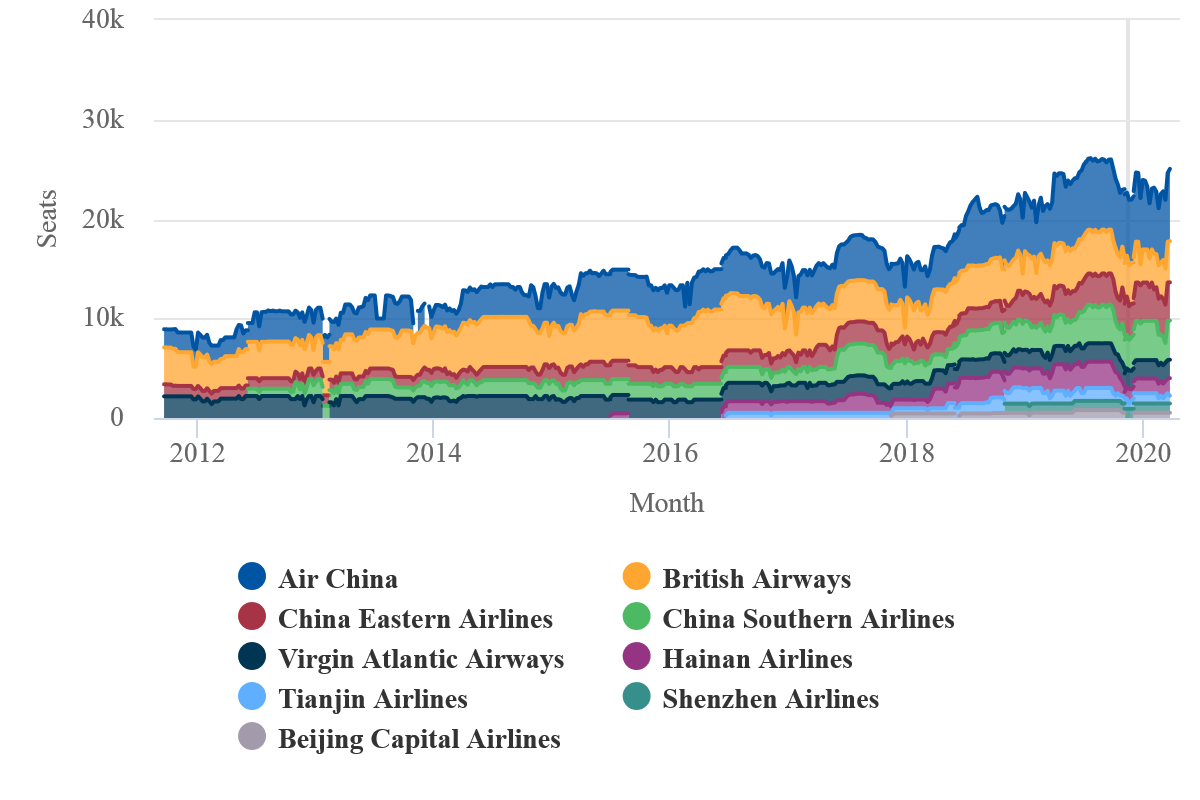 Heathrow-Shanghai is the biggest UK-China route

According to OAG data for the week of 11-Nov-2019, Heathrow-Shanghai is the biggest UK-China route by seats, ahead of Heathrow-Beijing and Gatwick-Shanghai. 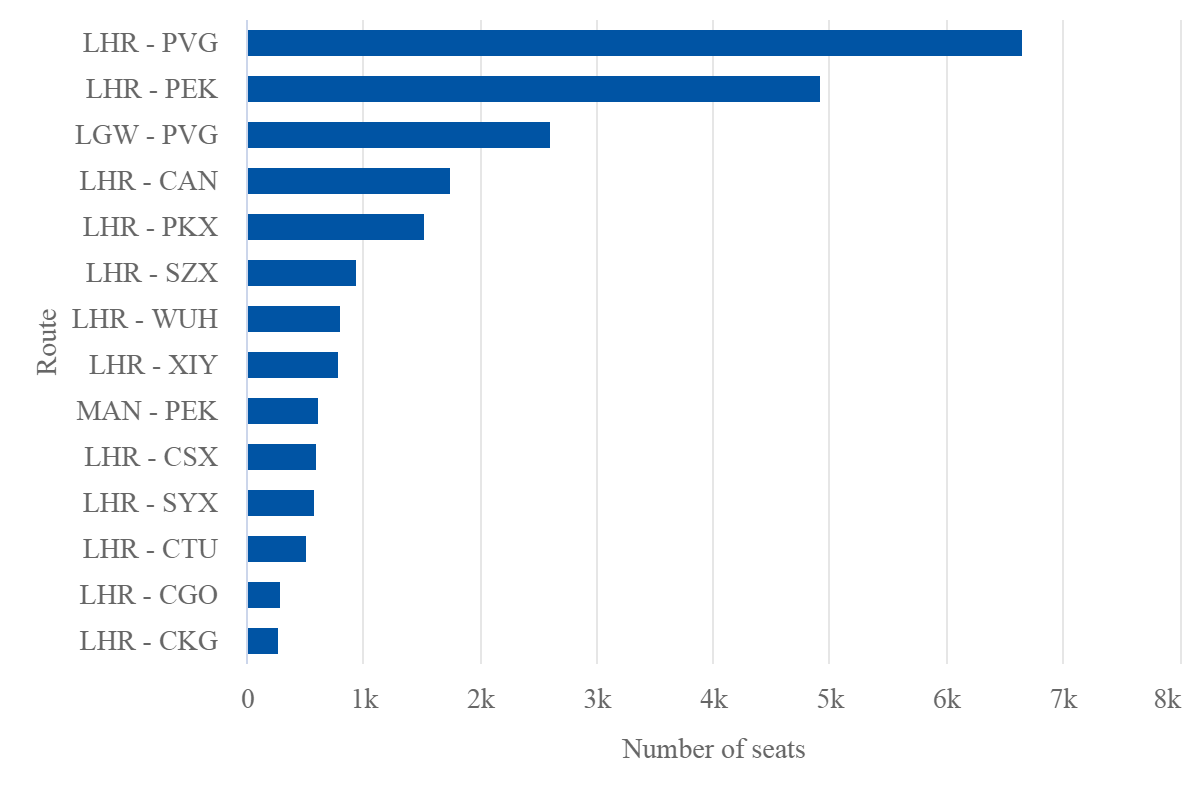 It is not yet clear what will happen to the Virgin-Air China codeshare, but China Eastern's Shanghai Pudong network is much bigger (Air China has only 34 routes, of which 21 are domestic).

Moreover, with 652 routes in the week of 11-Nov-2019, China Eastern's overall domestic network is much bigger than Air China's, which has 356 routes. This would give Virgin greater codeshare access to domestic China if it chose to increase the number of gateways it serves in the future.

Air China and BA are the biggest airlines in UK-China

China Eastern may offer Virgin more connections into domestic China in the long run, but Virgin's existing codeshare partner Air China is the largest UK-China airline by seats, with almost 30% of capacity in summer 2019 (based on OAG data for the week of 8-Jul-2019).

BA is number two, with 18%, ahead of three Chinese airlines with 11%-12% each: China Eastern, China Southern and Hainan Airlines, ranked third to fifth.

Virgin Atlantic has just under 8% of seats between the two nations, while Tianjin Airlines, Shenzhen Airlines and Beijing Capital Airlines have 5% or less.

*Virgin Atlantic will enter the JV between China Eastern and Air France-KLM, bringing Virgin and China Eastern into JV partnership from summer 2020.
**Hainan Airlines briefly entered in Jul-2015, but operated to the UK only until Aug-2015.
Source: CAPA - Centre for Aviation, OAG.

The combination of China Southern and Virgin will give the JV a seat share of 19%, just ahead of British Airways, in a form of cooperation that goes much deeper than codeshare.

BA codeshares with both China Southern and China Eastern and, earlier this year, it announced that the China Southern partnership was expanding its scope and would include reciprocal frequent flyer recognition.

However, for now, Virgin Atlantic may have stolen an edge on its UK rival in this market.

If Heathrow's runway expansion goes ahead, Virgin has further plans to develop its network, including new destinations in China.

Air China is the leading group overall between Europe and China but Air France-KLM is the leading European group, a position that is boosted by Virgin Atlantic's inclusion in its JV.

Air France-KLM is second overall, China Eastern is third, and Lufthansa Group is fourth (ranked by seats in the week of 11-Nov-2019, source: OAG). IAG is eighth, while Virgin Atlantic is 10th.

In JV terms, the combination of Lufthansa Group and Air China is the biggest, with the Air France-KLM/China Eastern partnership approximately 60% of the size of its larger rival.

Virgin Atlantic's entry into the Air France-KLM/China Eastern JV only narrows this gap slightly, but it gives the airline a third European country to match the three served by the Lufthansa Group/Air China JV (which covers Germany, Switzerland and Austria).

Moreover, that third country, the UK, is the largest aviation market in Europe.