British Airways (BA) is preparing to disband bmibaby, the low-cost unit it unwelcomely acquired from bmi after previous owner Lufthansa failed to find a buyer. But as the saying goes: one man’s meat in another man’s poison and the news of bmibaby’s grounding was welcomed by multiple airlines including Monarch, Flybe and Jet2.com, all of which are swiftly stepping in to backfill capacity.

Anemic-turns-dynamic is not exclusive to bmibaby’s network but a development seen following the recent demise of other small- and medium-sized airlines in Europe such as Spanair, Malev and Cimber Sterling. In those cases, competitors have reacted swiftly and within a couple of days to fill the void.

bmibaby’s closure is indicative of a recent development in Europe: the lavish injection of capital in loss-making carriers is coming to a standstill with public and private shareholders alike halting the operations of these entities, mostly small- and medium sized airlines, a trend long overdue and induced by low or no economic growth in most EU countries implementing stark austerity measures, and high fuel prices.

bmibaby to first wind up secondary bases and competitive routes

British Airways is planning two stages to wind up bmibaby, although it remains open to receiving offers that would allow it to transfer ownership and operations to another party. bmibaby has lost GBP100 million over the past four years. “IAG has consistently said that bmibaby and bmi Regional are not part of its long-term plans. Progress has been made with a potential buyer for bmi Regional, but so far this has not been possible for bmibaby, despite attempts over many months by both Lufthansa and IAG,” Peter Simpson, bmi interim managing director, said in a statement last week.

Mr Simpson added: “bmibaby has therefore started consultation to look at future options including, subject to that consultation, a proposal to close in September this year. To help stem losses as quickly as possible and as a preliminary measure, we will be making reductions to bmibaby’s flying programme from June.”

bmibaby’s size and network has reduced dramatically over the past years, and it presently focuses its operations around three bases (East Midlands, Birmingham and Belfast-City) with a fleet comprising 12 Boeing 737-300s and two -500s. Last year, as part of yet another restructuring exercise the carrier closed its bases at Manchester and Cardiff. It carried 2.2 million passengers in 2011, down from 4.3 million in 2007. 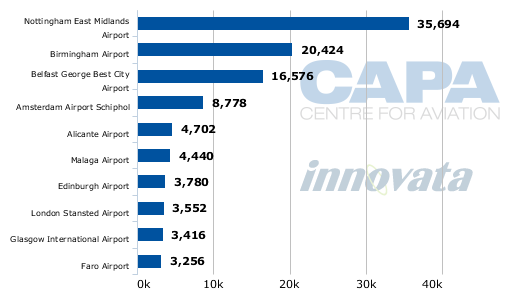 The first stage, to be completed by 11-Jun-2012, will see bmibaby's Belfast base closed and services to primarily larger cities (including Geneva, Nice and Paris) from East Midlands and Birmingham suspended. Through the summer, BA will keep bmibaby routes from East Midlands and Birmingham to primarily smaller destinations (including Jersey, Malta and Verona) where competition is less.

bmibaby noted the routes to be suspended in Jun-2012 "are already well served by other airlines and for domestic flights, with the exception of Belfast, other forms of transport are also available for customers. It is hoped therefore that disruption will be minimised for affected customers as alternative arrangements could be made." It is also indicative the routes face intense competition, which has been suppressing bmibaby's yields.

The Belfast base, bmibaby added, "is in its first full year of operation, and still needs investment", making it an easy initial target to stem losses at.

All eyes on East Midlands base, despite strong Ryanair presence

Ryanair offered so-called rescue fares, which primarily target bmibaby's Belfast hub. Belfast is a two-hour drive from Ryanair's Dublin base, where Ryanair matches bmibaby's Belfast network except for Amsterdam to which it has no services from Dublin.

Monarch Airlines, Flybe and Jet2.com all announced notable expansions at East Midlands, hoping to capture bmibaby’s capacity share at the airport, which is owned by Manchester Airports Group (MAG). The LCC off-shoot of bmi is East Midlands’ second largest operator, with a 32.6% seat capacity share. The largest carrier at East Midlands is Ryanair, which operates some 40 routes from/to the airport. 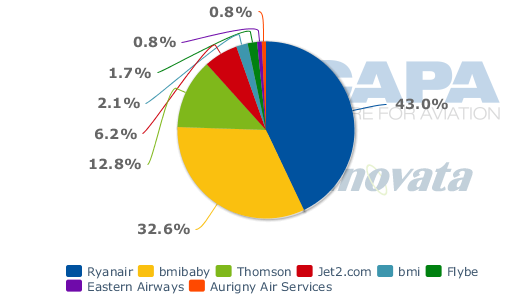 London Luton-based leisure carrier Monarch Airlines said it would open a base at East Midlands and expand its presence in Birmingham. bmibaby's closure is opportunistic for Monarch, which is in the middle of a turnaround plan to increase its scheduled services to key leisure destinations across the Mediterranean, the Canaries and North Africa.

Commenting on the announcement, managing director of Monarch Airlines, Kevin George said: “As opportunities have opened up in the market, it has become clear that the Midlands will be underserved as a region in the future”. Mr George noted that the expansion of its existing services from Birmingham and the launch of operations from East Midlands “makes perfect sense for Monarch, and accelerates the strategy we announced last year to focus on the development of our scheduled operations.”

Monarch said it would boost its Birmingham operation with additional frequencies, including to Malaga, Alicanta, Faro, Rome and Palma, as well as open a new route to Barcelona. Its main move will be at East Midlands, where it intends to base aircraft and crew from late summer 2012 and would include destinations of Malaga, Alicante, Palma (Majorca) and Faro. The four routes were some of bmibaby's 10 largest routes (seats) across its network. 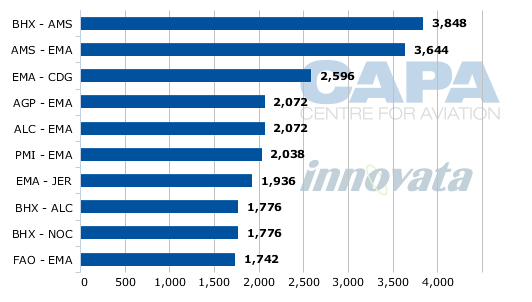 bmibaby is primarily an international carrier with about 70% of all seats deployed to international markets. It currently only operates five domestic routes, although with a relatively large weekly seat capacity. 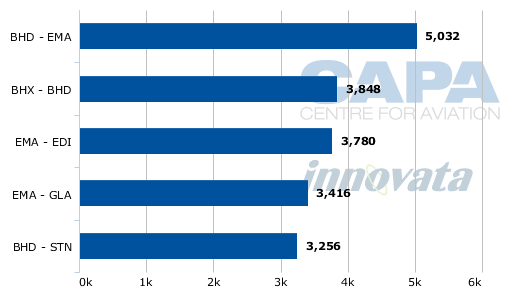 The majority of bmibaby's domestic routes are served by other carriers, including Flybe from Belfast to East Midlands and Birmingham; and Flybe and bmi (now BA) from Belfast to London (multiple airports). Only two routes – East Midlands to Edinburgh and Glasgow – currently have no second carrier but Flybe has announced plans to step in. In the meantime, it is offering special fares on its services to the two Scottish airports from Birmingham.

Jet2.com and Flybe have joined Monarch in adding services from East Midlands, further enhancing the airport’s position as gateway for low-cost short-haul and medium-haul flights. According to data from Innovata, 84% of the airport''s international seat capacity is within Western Europe. Only 14% of the East Midlands' capacity is domestic and 84% of all capacity is deployed by LCCs. 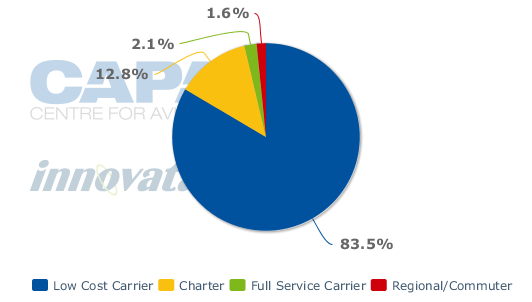 Jet2.com says it will launch eight routes from East Midlands over the next 12 months, flying to Chambery and Geneva this winter and to Dubrovnik, Menorca, Nice, Ibiza, Larnaca and Gran Canaria for summer 2013. It will base an additional 737 at the airport next summer.

Jet2.com CCO Steve Heapy commented: “We opened from East Midlands a couple of years ago with core routes and the services are popular. There is big demand in the region.” The carrier already operates from East Midlands to Spain, the Canary Islands, Portugal and the Eastern Mediterranean.

bmibaby’s anticipated grounding also has prompted Flybe to bring forward plans to start new routes to Amsterdam, Paris Charles de Gaulle, Edinburgh, Glasgow and Jersey from East Midlands Airport to early summer. Flybe had originally planned to run these from October. It is also planning to double its existing weekday flights from East Midlands to Belfast City Airport to four per day while adding more capacity on its Birmingham-Belfast route.

Flybe UK MD Andrew Strong commented: “We have been surprised at bmibaby’s decision to close some of its routes within just six weeks time and as a result we are doing everything we can to work with our airport partners in ensuring that those passengers wanting to travel from East Midlands Airport are not left stranded.”

The grounding of bmibaby is, of course, not really a surprise. After four consecutive years of losses and multiple restructuring efforts, management was unable to make it a profitable endeavor and its new owner, British Airways, was not interested in negative baggage as part of its bmi acquisition.