IATA’s Giovanni Bisignani touched on a wide range of perceived failings in UK aviation during a scathing address to the UK Aviation Club.

But the Air Passenger Duty (APD) is almost unrivalled for the scorn that it attracts. Carriers in Britain and elsewhere have had little positive to say about the levy and British Midland (BMI) has already terminated its services between London and Glasgow, citing the added APD charges as making the services financially unattractive. This will markedly increase the cost of travel for connecting service to/from international destinations for passengers not using British Airways or other oneworld carriers, as reported by the UK’s Air & Business Travel News.

Now ABTA, the Association of British Travel Agents, is spearheading a coalition of UK travel industry entities to lobby the government for what it has named a “Fair Tax on Flying”.

A formidable set of foes

While the tax has garnered opposition from all corners since its introduction, this effort represents the first time that a coordinated initiative has been organised. The coalition is composed of airlines, airports, travel industry groups and offices of tourism.

The campaign is designed to alter government policy by direct appeals, a letter was sent to the Chancellor of the Exchequer outlining the extent of the problem. But the group also is waging a public campaign, via the media, to inform Britons of the direct and indirect costs of the levy.

The group has asked the government to justify the tax on the basis of five “tests”. They ask that the regulators justify policies that are seen to be both arbitrary and damaging to British aviation and the nation’s tourism industry, cited by the government as one of the top five industries in Britain.

Thelobby's five tests are, as addressed to the Chancellor:

Will any revision increase the overall amount travellers pay to fly to and from the UK? We believe that the increasing tax on people flying puts the UK at a competitive disadvantage when compared with European neighbours and will incentivise the strengthening of alternative hubs to the UK both in and outside Europe and reduce the number of connections and destinations served by UK airports. An increasing level of aviation tax represents a very real barrier to growth for British businesses, and adversely affects the ability of the UK economy to create jobs and attract inward investment.

Will any change be designed to be offset by the income from the UK’s inclusion in the European Union Emissions Trading Scheme (ETS)? We believe income due to the UK from aviation’s participation in the ETS should be offset against total aviation taxation income and not added as an additional cost on people flying.

Will a new approach remove the unfairness that travellers buying a premium economy ticket for a few extra inches of legroom are classed the same as first class travellers and pay double the rate of tax? Families buying a little extra legroom are being charged a disproportionately higher price. This disincentivises airlines to offer a sensible split cabin and damages passenger choice.

Will any new policy address concerns that defining bands by national capital cities creates unhelpful exceptions that are unfair to passengers and damage destinations? It cannot be right that a traveller pays more tax to fly from the UK to, for example, the Caribbean than to Hawaii (some 3000 miles further) due to the inconsistent way the banding arrangements have been determined.

Has the policy’s impact on business and tourism been adequately understood and considered? Aviation tax is having a serious economic impact as it makes flying to and from the UK more expensive. Any modification of APD should ensure that the impact on destinations, both at home and abroad, has not only been considered but also, wherever possible, mitigated. This is especially important in those developing countries where tourism provides a large proportion of GDP.

As a sign of the times, the group is also using Facebook to encourage the general populace to join in forcing a reassessment of the APD. Its public campaign includes a number of charts that highlight the added cost to consumers as well as the impact that the tax has had on the British aviation market.

Much like the American Airlines/GDS fight in the US, the effects of the APD have motivated a broad market-based response, this time directed towards the government rather than an airline, indicating that travellers, fed up with what they see as arbitrary actions, are willing to join the fight.

But the UK, like many other governments, is in tight financial straits and the APD is a source of revenue. Whether or not the coalition will be able to convince the government to amend the tax in exchange for a longer-term benefit is far from certain.

As with all things fiscal, wild cards abound and any outcome is possible. And next, we have not even begun to discuss the effects of pending labour actions in the UK. 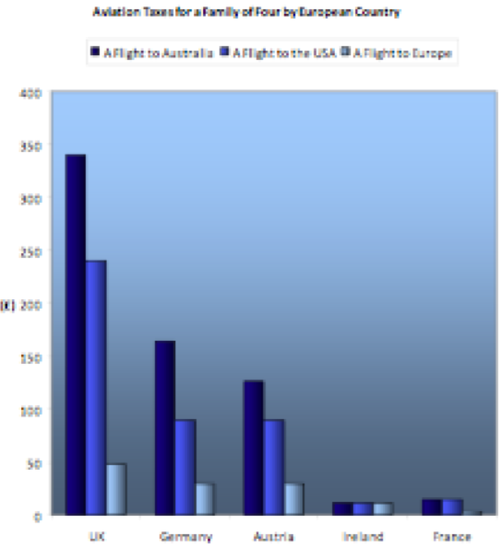 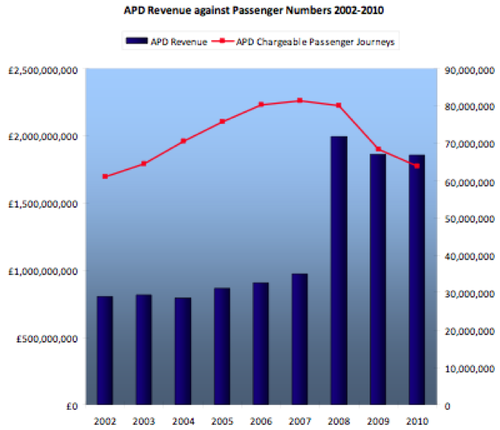