UAE's RAK Airways is on the expansion path, with a new strategic direction

RAK Airways, based in Ras Al Khaimah, is the perennial younger brother of the UAE’s aviation market, but it is growing up quickly.

The airline launched two new routes in Aug-2013, with four times weekly service to Islamabad and Amman, increasing its network to 11 destinations. It has also announced an expansion plan that is in line with the ambitions shown by some of its peers in the UAE.

Although dwarfed by its larger UAE neighbours, tiny RAK has aspirations to greater things, planning on operating to 40 destinations by 2015.

While Emirates and Etihad Airways bring about a new order in global travel and Air Arabia and flydubai lead the region’s low cost market, RAK Airways survives somewhere in the interval. As the state-owned carrier of the emirate of Ras Al Khaimah, it provides point-to-point travel linking key international strategic points with the northern emirate. It is also one of the keys to the future development of Ras Al Khaimah.

In Jul-2013, the carrier’s president and CEO Engr. Murabit Al Sawaf announced a new strategic direction for the carrier. The carrier is eyeing expanding its route network to 40 destinations by 2015. Five of these destinations are due to be announced shortly. Supporting this will be a fleet expansion.

No details of the fleet plan have been outlined, although, according to RAK Airways' vice chairman, Sheikh Salem bin Sultan Al Qasimi - who is also the chairman of the Directorate of the Civil Aviation of Ras Al Khaimah - RAK will be sticking with the A320 as it brings its fleet to ten aircraft over the next few years.

Growing up in the Middle East’s most mature market

After its re-launch under new management in 2010 and a challenging 2011 when it handled around 250,000 passengers, RAK Airways showed more strategic maturity in 2012. During 2012, it signed a long-term agreement with SITA to handle IT services and signed its first GDS agreement, with Travelport, widening its distribution base considerably.

The carrier also signed a codeshare agreement with Etihad Airways, placing its code on flights between Abu Dhabi and London Heathrow, Manchester, Dublin, Bangkok and Geneva, in exchange for Etihad placing its code on RAK Airways’ flight between Ras Al Khaimah and Abu Dhabi. 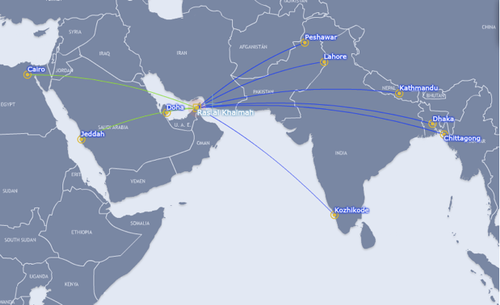 The airline carried 300,000 passengers across nine routes in 2012, although the year was not without its difficulties. Plans to add service to Bangkok, its first long-haul destination, were abandoned in favour of a more conservative growth strategy based around improving the performance of the existing network. This year, the airline has added frequencies to Dhaka, Peshawar and Lahore, with impressive results. 1H2013 passenger traffic increased 40% and more frequency enhancements are planned, including upping frequency to Jeddah from seven to ten times weekly.

The carrier is in discussions with authorities in Saudi Arabia seeking more rights. The country, with the GCC’s largest population and economy, is an extremely important market for RAK Airways, with significant potential for both tourism and business travel. The airline also wants to add more capacity into Pakistan and India, both strong transit worker markets, although capacity under the existing bilateral air services agreements with India is already being fully utilised.

The government of Ras Al Khaimah is seeking to emulate some of the success of the other emirates, which have pioneered aviation development in the Gulf region. According to Sheikh Salem, the objective is to develop Ras Al Khaimah as the UAE’s fourth hub, alongside Abu Dhabi, Dubai and Sharjah, moving to develop aviation and tourism to diversify away from dependency on the oil sector.

Rather than replicate the path taken by the more establish airlines, RAK Airways is aiming to do this its own way. The carrier has positioned itself as a hybrid operation, with a product somewhere between that offered by full service airlines and low-cost carriers. It offers free food and beverages, a generous 30 kg baggage allowance and a full-service airline ethos when it comes to passenger service.

Its A320s have eight premium seats and 160 economy class seats. The dual cabin configuration is common enough for A320 operators in the Middle East, although 168 seats is a higher density than that offered by other operators with two-class A320 cabins.

In Jun-2012, the carrier launched its ‘RAK Premier’ product, featuring extra legroom, a larger baggage allowance and priority delivery, priority check-in an onboard meals. The company is highlighting the quality and comfort of the service for Business Class passengers, as well as offering strong passenger service and value for money.

In the company of giants

The UAE already has four major carriers, which handled more than 60 million passengers last years and Ras Al Khaimah International Airport is obviously dwarfed by the UAE’s other hubs. Better than 80 million passengers went through Abu Dhabi, Dubai and Sharjah in 2012, most of them transfer passengers.

However, the emirate is hoping to capitalise on the success of aviation in the UAE. The growth of RAK Airways and ad-hoc charter operations saw traffic at Ras Al Khaimah International Airport increase 24% year-on-year in 2012. Revenue at the airport increased 60% and cargo traffic increased 25%. The airport reported a 42% year-on-year increase in aircraft movements and a 30% increase in revenue in 1Q2013, continuing the growth trajectory.

According to Ras Al Khaimah Airport CEO Andrew Gower, the success of the airport is its ability to operate as a faster alternative to the established hubs. With just a single runway and comparatively uncongested facilities, the airport offers quick turn-around and ease of operation. It has already attracted significant freight traffic, with 17 scheduled and charter cargo operators as of the end of Jun-2013. Offering free parking and free shuttle service from anywhere in the UAE, the airport is pressing its case as an attractive option for travel for the UAE’s four small northern emirates, which have a combined population of around 800,000. The stalled development of Ajman International Airport, which was to have been completed in 2011 but now is unlikely to be finished before 2015, has also helped Ras Al Khaimah.

Ambitious but nebulous plans for the future

Can RAK Airways become another success story in the UAE’s already crowded aviation market place? At the moment, it is certainly heading in the right direction, but there is a difference between a good start and establishing another player in the market.

Strategically, RAK Airways is a small, point-to-point operation with a modest catchment area, but the government of Ras Al Khaimah has bigger plans. It aims to become a regional player, seeing the emirate developing as a fourth hub for the UAE, alongside Abu Dhabi, Dubai and Sharjah and RAK Airways as the UAE’s fifth major carrier.

Ras Al Khaimah has already proved to be a strong cargo destination, but attracting significant passenger traffic, especially without a major transfer network, is scarcely a realistic option for the time being. At a little over 100 km from Dubai, the city is too far from the main UAE cities to be a viable alternative airport, as Sharjah is for Air Arabia. The northern emirates which Ras Al Khaimah airport serves does have business and tourism potential, with travel drivers including environmental, marine, desert and archaeological tourism. In addition, Ajman’s troubles are Ras Al Khaimah’s gains, at least in the short-term, and the worker and business markets into South India are a consistent driver of traffic growth.

So far, RAK Airways has moved ahead in careful, calculated steps. It has a modest fleet and a modest network, with well selected destinations. RAK’s plan isn’t to link Southeast Asia or Africa, although European destinations are a possibility, but to provide a third way in the UAE and build on its recent success.