European airline shares sunk for another day on Friday (20-Aug-2010), again pushed lower by weaker wider markets, which fell to their lowest close in a month. Markets were down on continued concerns about the strength of the economic recovery worldwide.

The decline in airline shares was despite a 1.3% fall in oil prices to USD74.43.

Banks and brokerage companies expect Turkish Airlines (+0.4%) to return to profit in 2Q2010, according to Gulf Daily News. On average, the companies expect the carrier to report net income of USD97 million on an 18% year-on-year increase in revenues for the quarter (to USD1.3 billion), compared with a loss of USD35 million in the previous corresponding period.

The carrier previously reported a 14% year-on-year rise in passenger numbers for the quarter to 7.2 million.

Cimber Sterling expecting to return to profitability in FY2010-11

Cimber Sterling (-2.1%) declined despite CEO, Jacob Krogsgaard, stating the carrier has managed to offset the dramatic events over the past financial year and is confident of meeting the goal of returning to profitability by the end of the 2010/2011 financial year.

Aer Lingus (-2.4%) was also down. The carrier and its cabin crew entered mediation with the Irish Labour Relations Commission on rostering issues during the day. Cabin crew are due to commence industrial action on 25-Aug-2010 unless the mediator issues a binding decision on new rosters. 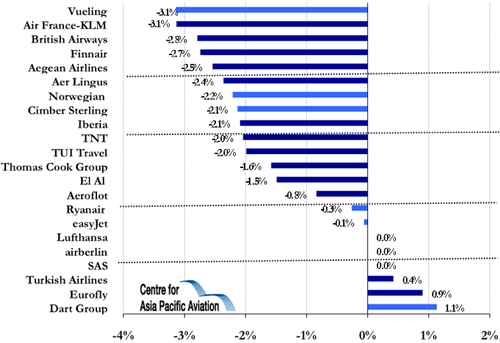