Since the election of Argentina’s new president Alberto Fernandez and the former president Cristina Kirchner as vice president in late 2019, speculation has grown over how the new government will oversee the reforms of the previous administration that paved the way for new entrant low cost operators to launch operations in the country.

In the very early days of the administration there have not been any earth shattering changes to the overall status quo of the current state of Argentina’s aviation industry, but there are some troubling signs emerging, including what appears to be heightened scrutiny of the operations of the low cost operator Flybondi and declarations by the new CEO of state-owned Aerolineas Argentinas that the previous liberalisation was unrestricted.

Those developments could suggest that further liberalisation in the country is a non starter, and protectionist policies could creep back into Argentina’s aviation landscape. And perhaps there should be some cause for concern over how the government could oversee low cost operators in the future.

LCCs have made inroads in Argentina, a previously closed-off country

Aspiring LCCs also received a break when the government lifted the long-standing fare floor in Argentina during the summer of 2018.

Data from Argentina’s ANAC show that between 2014 and 2019 the country’s domestic passenger levels jumped by 60%, from 10 million to 16 million. Even despite high charges, the new entrant LCCs were able to make significant inroads, where previously long distance buses made up much of the domestic travel market. 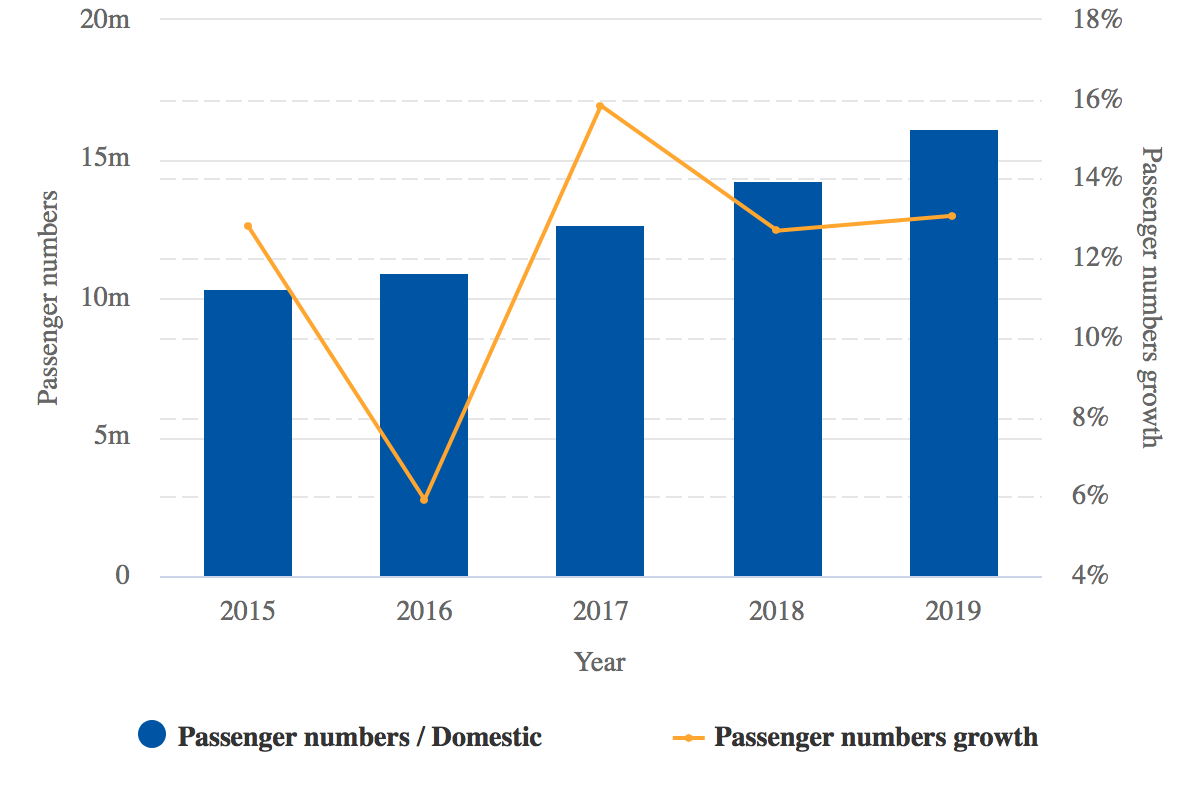 In late 2019 Norwegian, as part of its wider corporate rationalisation programme, decided to exit the market and sell 100% of the company to JetSMART.

The ANAC data show that low cost operators represented nearly 20% of Argentina’s domestic flights in 2019. During 2017, Argentina had one of the lowest trips per capita in Latin America, of 0.4.

Percentage of domestic flights among Argentina's domestic airlines in 2019

Those conditions coalesced to facilitate the rise of Mr Fernandez and Ms Kirchner, and their ticket was victorious in Argentina’s presidential election late 2019. Mr Fernandez was inaugurated in Dec-2019.

At this point it is unclear whether Mr Fernandez’s approach to governance will be a carbon copy of Ms Kirchner’s presidency, which lasted from 2007 to 2015 and followed the presidency of her husband, the late Nestor Kirchner. However, in Dec-2019 he ominously welcomed carriers to connect Argentina under his terms, saying: "If they will all connect Argentina, may they come", however, added: "What is not possible is for companies to come to Cordoba, Bariloche, Neuquen, Calafate, Trelew and Iguazu, and leave the rest of Argentina to the poor Aerolineas Argentinas...."If I give you the strawberry and I have to eat the hard crust of the pie, I will not do that."

During Mr Macri’s tenure there was never any discussion about privatising Aerolineas Argentinas, but the airline was forced to compete more on an equal footing in both the international and domestic markets.

In Dec-2019 Aerolineas Argentinas named Pablo Ceriani as CEO, who reportedly served as a vice president of the airline from 2013 to 2015.

After his appointment as the airline’s chief executive Mr Ceriani told the news outlet 'Clarín' that the liberalisation policies adopted by the government of Mr Macri were damaging, and generated an “uncontrolled growth offer”. Mr Ceriani said that “practically all carriers are broke”. Mr Ceriani also told the publication that he expects that Aerolineas Argentinas will require USD700 million in state subsidies.

Argentina's regulators are rebuking Flybondi harshly. Is this a one-off or a trend?

The government also appears to be heightening its scrutiny of Flybondi, which could indicate future concerns for the low cost model in the country.

Flybondi was forced to issue a statement regarding an relatively routine emergency landing of one of its Boeing 737-800s in early Feb-2020, expressing concerns over how Argentina’s new transport minister characterised the incident and over a lack of knowledge regarding the low cost model.

In a statement, Flybondi said that “being low cost does not imply cutting costs on absolutely essential matters such as operational safety and appropriate aircraft maintenance”, and also stated that fleet age does not impact operational issues.

Before Flybondi’s statement Argentina’s ANAC had taken to Twitter to state that it had ordered an urgent inspection of Flybondi’s aircraft, and had summoned the airline’s maintenance managers for a meeting to discuss the incident – it is odd, and arguably alarming, for a governmental agency to broadcast on social media that it is holding meetings with an airline regarding a potential safety issue.

Flybondi has been operating in Argentina for a little more than two years and has not faced this particular level of scrutiny and it begs the question: if this event had occurred at Aerolineas Argentinas, would the government have reacted in a similar manner?

Argentina has many characteristics that make it attractive for low cost operators – low air trips per capita, a large percentage of the population that travels by long distance bus, and a dominant full service carrier that, in this case, has been largely protected by the government for years.

Now Argentina’s new government is sending troubling signals that could potentially hamper the growth of the country’s burgeoning LCCs, and it does not appear that any progress in liberalisation will continue.