The World Trade Organization is expected to announce a “mixed” ruling at the end of August or in early September regarding the US case that launch aid provided to Airbus for aircraft development by EU nations violates free trade rules.

Boeing is confident that the ruling will favour its case, and is seeking a “permanent and complete” end to launch aid. However, the indications are that while the “complicated and mixed” ruling will favour the US case in some points, Washington will also lose out in others. Without a strong ruling in any one direction, both sides could potentially emerge from the dispute claiming victory, of a sort.

The focus will then turn to a second round, also currently before the WTO. After the US launched its case in 2005, the EU brought a countersuit in 2006, arguing that various payments to Boeing by the US Government amount to subsidies. A decision on that case is expected by mid-2010.

The ongoing multi-year, multi-billion dollar dispute over commercial and military aerospace manufacturing has the potential to do serious harm to both Boeing and Airbus. A ruling backing the US case could potentially harm development of Airbus’ new A350 XWB, blocking European nations from providing the EUR3-3.5 billion in development financing that EADS is seeking for the EUR11 billion programme.

A third round to the dispute is potentially in the works. US trade representatives confirmed at the Paris Airshow that the financing Airbus is seeking for the A350 would not remain unchallenged. At the same time, Airbus was negotiating with France, Germany, Spain and the UK over details of the financing.

Airbus parent, EADS, was up 1.9% yesterday, while Boeing gained 2.4%, after strong trading on Monday continued into Tuesday. 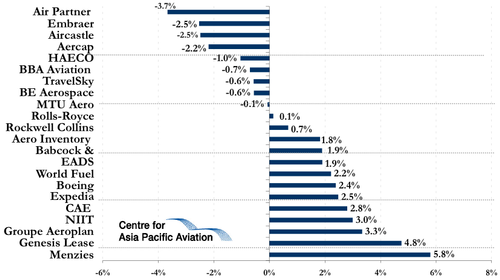