Yes, it does exist: an Asian airport with almost zero growth. Once the epicentre of the Japan Inc. growth spurt, Tokyo Narita managed only a 0.6% increase in passengers in 2014 despite plentiful slots being available. At regional airports where slots are not as readily available, Beijing Capital posted 2.9% growth in 2014, Shanghai Pudong 9.5% and Hong Kong 5.5%. Narita's 0.6% increase was comprised of 5.7% growth in the first five months and a 2.7% decrease in the last seven months. Jan-2015 traffic was down a further 6.7%.

Transit traffic is decreasing from a high of 21% in 2009 to 18% in 2014. Narita joins Seoul Incheon in suffering transit traffic decreases as Chinese hubs finally flex their muscle. Airlines have shifted to Tokyo Haneda while US carriers are favouring non-stops into other Asian cities rather than hubbing at Narita. There is some long-haul growth on the horizon with the arrival of Ethiopian Airlines and more flights from ANA and JAL, but Narita must contend with a decreasing presence from US carriers. Delta's Narita capacity will be down 11% in 2015 while United's will decrease 15%. American could decrease its size if its moves its Los Angeles flight from Narita to Haneda. 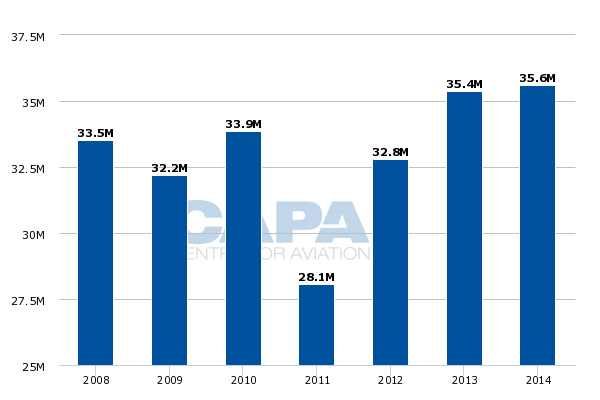 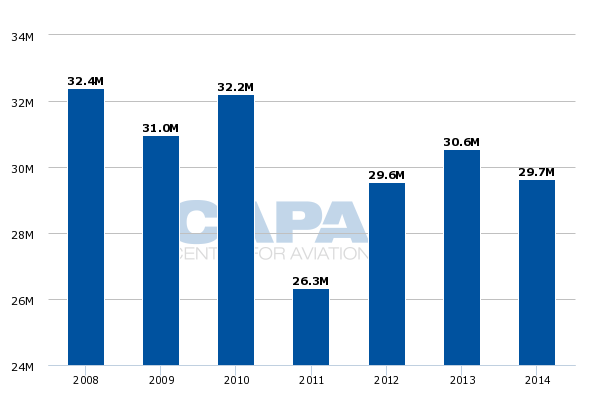 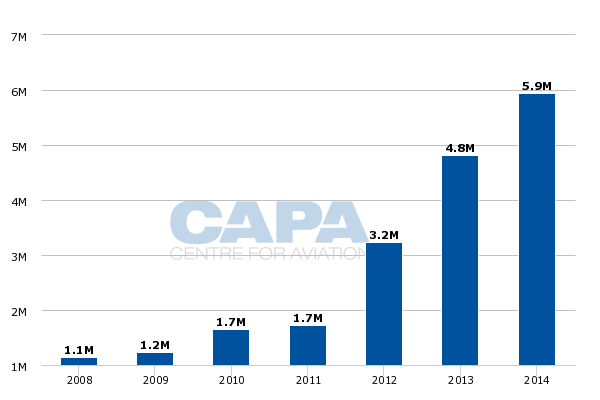 Without domestic growth, Narita would actually have suffered a decrease in 2014 traffic. 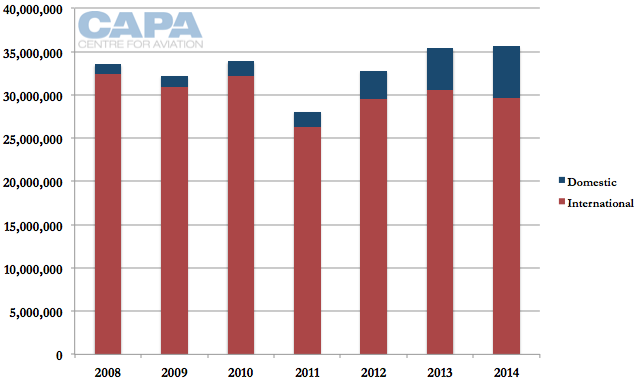 The first half of the year was stronger with 5.7% overall growth through May-2014 and then a 2.7% decrease for the rest of the year. Jan-2015 traffic is down 6.7%, comprised of a 5.7% increase in domestic traffic and an 8.8% decrease in international traffic. Narita's international passenger volume in Jan-2015 was the lowest in over five years. The impact from the shift in Chinese New Year is likely limited as other prior years did not have Chinese New Year in January either, 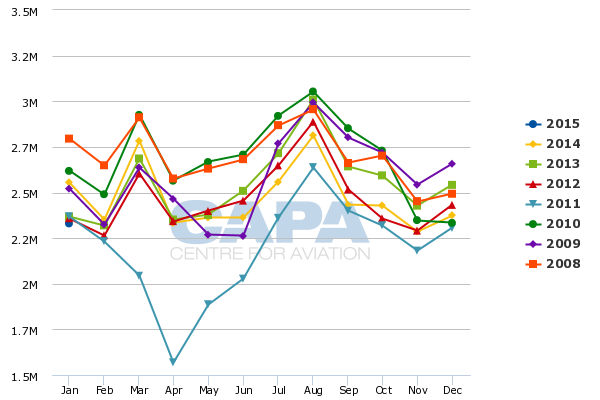 In 2014, Tokyo Narita experienced a net reduction of international seats, comprised of an imbalance between the addition of 1.0m seats but a decrease of 1.6m seats. Some seats lost at Narita were removed entirely from the Tokyo area and not transferred to Haneda. EgyptAir in 2014 pulled out of Narita, taking out 23,000 seats while Malaysia Airlines decreased Narita capacity by 30,000 and Vladivostok Air decreased its capacity by 36,000. None of these airlines added any seats to Haneda.

This figure excludes seats entirely removed from the Tokyo area (as in the case of EgyptAir, MAS, Korean Air etc.) as well as any growth airlines created at Haneda beyond what they took out of Narita: for example, Singapore Airlines reduced Narita seats by 32,000 but added 78,000 at Haneda. In this example, we only consider what SIA took out of Narita (32,000).

ANA took out 167,000 seats from Narita and added 564,000 at Haneda – we only count the 167,000 seats as what Narita "lost". There could be an argument ANA could have added flights from Narita if Haneda slots were not available, but we do not consider this. 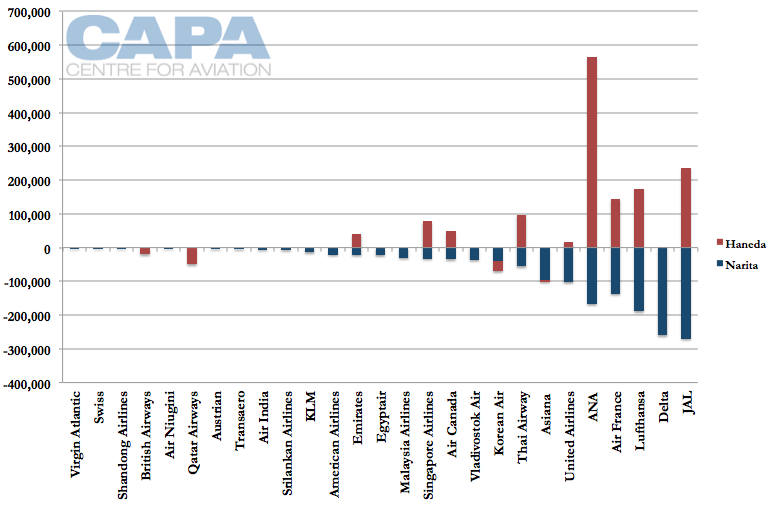 Tokyo Narita in 2014 saw 5.3m transit passengers, down 6% from 2013. This was its lowest figure in over a decade besides 2011, which was impacted by the traffic downturn as a result of the Mar-2011 earthquake and tsunami. 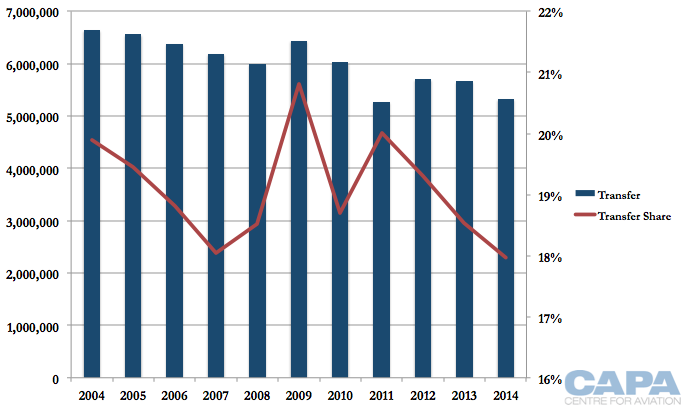 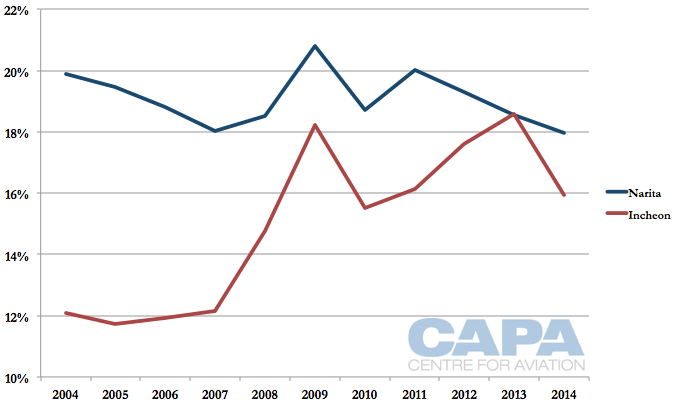 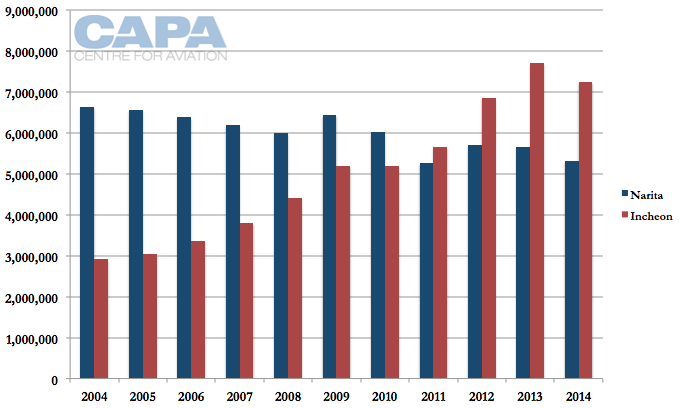 Ethiopian Airlines and ANA – plus LCCs – to grow at Narita

There will be some international growth at Tokyo Narita. Ethiopian Airlines will launch service via Hong Kong without local pick-up rights. Ethiopian will be Tokyo's only African carrier following the withdrawal of EgyptAir. ANA will open a new long-haul service to Houston and grow in Southeast Asia. Growth will also occur from LCCs, local (Jetstar Japan) and foreign.

Some of this growth will be offset by reductions from airlines including Garuda Indonesia.

Delta and United are decreasing Tokyo Narita capacity, and American Airlines may as well

Growth from Japanese carriers, and others, will be offset by a decreased presence from US carriers, continuing a medium-term trend. Delta, the largest US carrier at Narita, has decreased capacity every year since 2010 while United has done so since 2009. Delta will decrease 2015 Narita capacity (to/from, including intra-Asia flying) by 11%, according to OAG data. United will decrease by 15% while American will increase capacity by 1% as it re-configures 777-200s with more seats. American has decreased Narita capacity every year since 2010, but all US carriers will be smaller in 2015 than 2005. 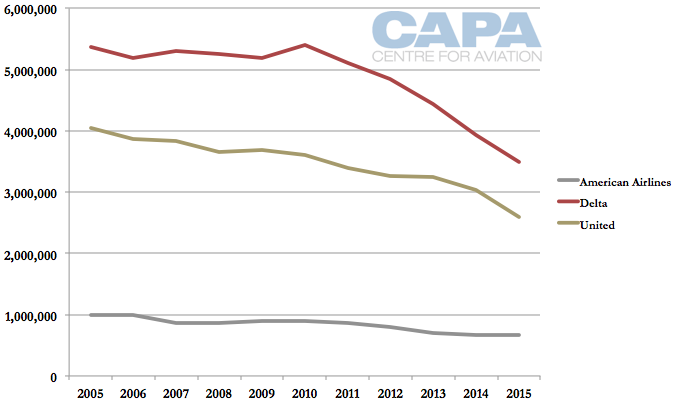 Outlook: Tokyo Narita is managing well. JAL's restructure and US capacity reductions are difficult to contend with

Tokyo Narita's low growth in 2014 and possible traffic decline in 2015 is confronting – especially in high-growth Asia. But Narita was dealt a difficult hand: comparing 2008 and 2015, Narita lost 4.9m seats one-way from JAL and the North American carriers (with the biggest declines from Delta and United). That is over 13,000 seats a day or 74 LCC A320 flights. 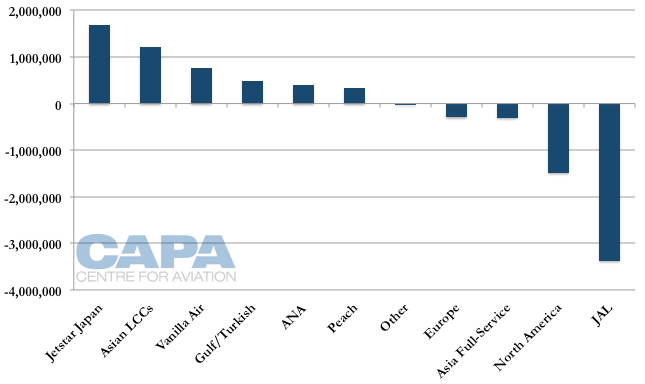 The old JAL and North American traffic was relatively easy to achieve: JAL was the flagship while Delta and United were familiar faces. Japan-US open skies took much political work, but there were vast changes needed to achieve 2015's traffic profile.

Narita has had to replace the traffic of effectively three well-established full-service airlines (JAL, Delta and United) with a multitude of smaller carriers.

Between 2008 and 2015, Tokyo Narita achieved a net increase of about a dozen airlines. Many of the new airlines and fast-growing carriers are LCCs and others are new-hub carriers from the Gulf (and Istanbul). These airlines have different needs (hence the LCCT), and in the case of Gulf carriers, are not as politically accepted.

Markets with open skies access to Tokyo Narita: as of Feb-2015 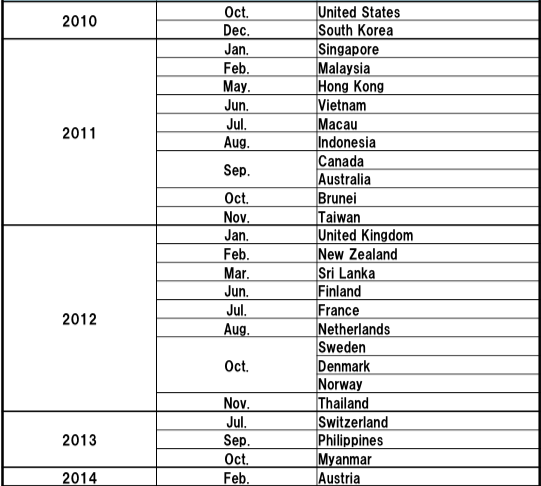 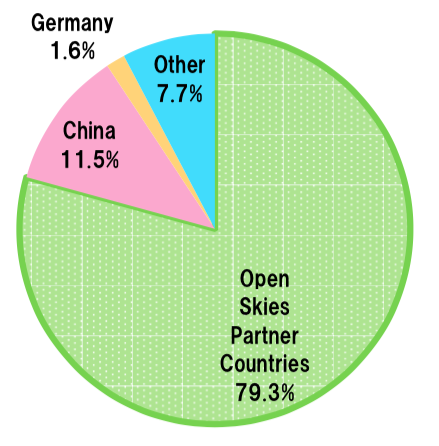 LCCs, foreign and domestic, promise more growth. But not all want to use the LCCT, a reminder no size fits all or even a few sizes fit most. There is certainly more for Narita and Japan as a whole to do. Few of Japan's ATMs accept foreign cards but this should change by the Tokyo Olympics – still some years away. Companies are making it easier for visitors to access WiFi, with the lack of GSM in Japan a challenge since visitors cannot simply acquire a local SIM card.

While more needs to be done, the changes in Japan and at Tokyo Narita airport have been significant.

Perspective should be maintained that this is a transition period. But this should not be used as an excuse to go slow on any further developments. The bigger risk is Japan's international pivot – 20m visitors by 2020, up from 10m in 2013 – may be conservative.