Tigerair is further restructuring its operation in a bid to turn around its sagging financial performance. The Singapore-based low-cost carrier group incurred a net loss of SGD223 million (USD177 million) in the year ending 31-Mar-2014 compared to a loss of SGD45 million (USD36 million) the prior year.

All of the group’s overseas affiliates continue to be unprofitable, dragging down Tigerair’s bottom line and forcing the group to adjust its fleet plan. The situation at its Indonesian affiliate is particularly challenging, prompting the group to look at divesting its investment in Tigerair Mandala. The group is grounding five of Mandala’s nine A320s and three of the five aircraft being returned from Tigerair Philippines. The removal of the eight aircraft along with the Mar-2014 cancellation of nine A320 orders which would have been delivered in FY2015 and FY2016 are two components of a turnaround initiative.

Revenues for the year were down by 15% and for the quarter by 33%. But this was driven by the removal of Tigerair Australia revenues from the group’s results as a 60% stake in the carrier was sold in Jul-2013 to Virgin Australia.

Tigerair Australia continues to be unprofitable

Mandala has now incurred losses of about USD180 million since it began operations as a Tigerair affiliate in Apr-2012. For FY2014, Tigerair recorded a loss of SGD56 million (USD70 million) related to its investment in Mandala.

As CAPA previously reported, Mandala slashed capacity in 4QFY2014 in a bid to reduce losses. Ten routes were suspended during the quarter, leaving the carrier with only nine routes.

Since the start of FY2015 Mandala also has cut Surabaya-Singapore and reduced frequencies on two of eight remaining routes – Jakarta to Bangkok (from two to one daily flight) and Singapore (from four to two daily flights). The carrier already reduced Jakarta-Singapore from five to four daily flights and cut Medan-Singapore and Pekanbaru-Singapore entirely as part of its initial route rationalisation exercise in 4QFY2014.

Tigerair no longer has a meaningful share of Indonesia market

Mandala now operates only four daily flights and two routes (Jakarta and Bali) at Tigerair’s hub in Singapore. Mandala’s contribution to the group has become essentially insignificant given that one of its main roles was to link several Indonesian markets with Singapore and beyond, leveraging the Tigerair network.

Tigerair Singapore still operates 24 weekly flights to Jakarta, seven to Bandung, six weekly flights to Bali and four to Surabaya, according to OAG data. But it suspended Singapore-Lombok in Apr-2014 and is cutting Singapore-Yogyakarta on 15-May-2014 in response to challenging condition in the Singapore-Indonesia market. 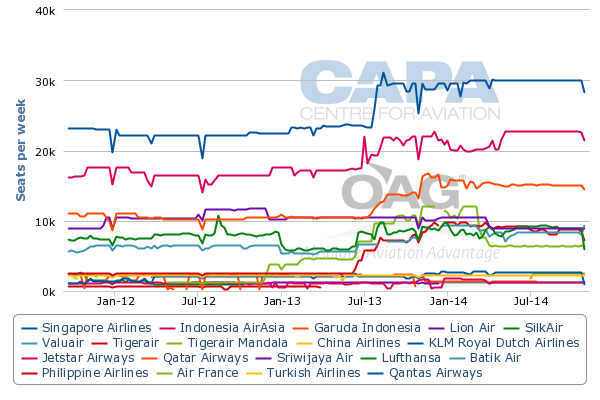 Indonesia is important strategically for Tigerair and the Singapore Airlines (SIA) Group, which owns a 40% stake in Tigerair. But the recent cuts significantly weaken Tigerair’s position in Southeast Asia’s largest market. The cuts and the potential divestment of its Mandala shareholding represent a U-turn in Tigerair’s strategy, which had been focusing on Indonesia as a priority after disappointments in the smaller and less strategically important markets of Australia and the Philippines.

Tigerair has stated it is now reviewing its investment in Indonesia. The group is looking at various options for its approximately 40% stake in Mandala but has not commented on the reported option of selling the carrier to Garuda budget subsidiary Citilink. Garuda has also been seeking to sell a 40% stake in Citilink, which should generate more interest than Mandala given Citilink has a more meaningful presence in Indonesia with a network of over 20 domestic destinations and a fleet of 24 A320s.

Even before its restructuring, Mandala lacked sufficient scale and was not a significant player in the domestic market. Mandala’s operation has now been cut back to a paltry 10 daily flights across eight routes (four international and four domestic). It began calendar 2014 operating 26 daily flights across 19 routes (12 international and seven domestic).

Tigerair Mandala has a fleet of nine A320s but is in the process of grounding five of its aircraft, leaving it with an operating fleet of only four A320s. The group also has decided to ground the three A320s that are currently operating at Tigerair Philippines.

The sale of Tigerair Philippines to Cebu Pacific was completed in Mar-2014. Tigerair had a 40% stake in the carrier, formerly known as SEAir, since Aug-2012. In the 19 months Tigerair had an investment in the Philippines, it recorded losses related to the investment of about USD53 million.

While its exit from the Philippines is an important component of the group’s turnaround efforts, Cebu Pacific was unwilling to assume the Tigerair Philippines fleet of five A320 family aircraft as they are powered with different engines from Cebu’s A320 fleet. Two A319s have already been returned and are currently operated by Tigerair Singapore, growing Tigerair Singapore’s fleet to 27 A320 family aircraft (25 A320s and two A319s). The three remaining A320s at Tigerair Philippines will be grounded over the next few months as they are returned to the group and replaced with Cebu Pacific-sourced A320.

The group included a SGD25 million (USD20 million) provision in its 4QFY2014 figures to reflect the planned grounding of the eight aircraft. Tigerair is seeking to sub-lease all eight aircraft and the provision, which impacted the group’s net loss, assumes sub-leasing the aircraft at current market rates. But as Tigerair has not yet found homes for these aircraft, there is a risk the financial impact from the grounding could be more than anticipated.

Grounding aircraft is a sensible move as the Singapore market is already oversaturated and clearly cannot absorb any additional aircraft exiting the Philippines or Indonesia. Tigerair Singapore already expanded its fleet by seven aircraft in FY2014, with brutal consequences. 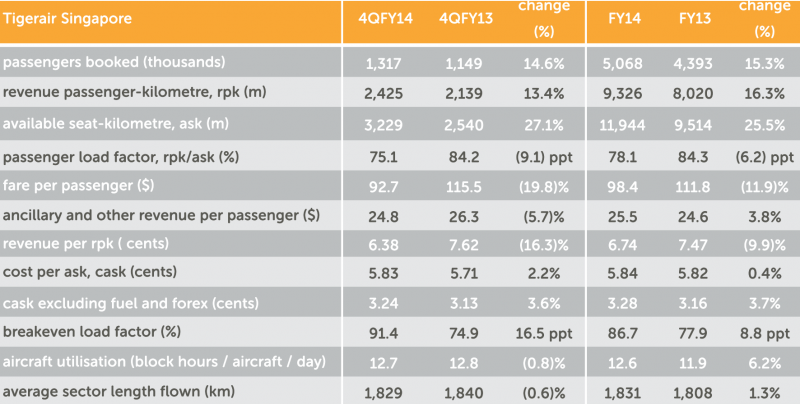 Tigerair Singapore’s load factor has now dropped for five consecutive quarters. The average yield also has dropped on a quarter-over-quarter basis for four of the last five quarters. During this period eight aircraft were added to the fleet.

Tigerair Singapore is trying to improve yields and load factor by slowing expansion and adjusting its network. In addition to suspending Lombok and Yogyakarta the carrier is reducing frequencies on seven routes – Bangkok, Cebu, Dhaka, Haikou, Macau, Taipei and Tiruchirappalli. But it is increasing capacity on some routes and has taken over the Singapore to Clark and Kalibo routes from Tigerair Philippines. The carrier is also launching service to Xian on 15-May-2014.

While it has not given capacity guidance for FY2015, overall capacity will still likely increase compared to FY2014 as Tigerair Singapore has just added the two A319s that were in the Philippines. The carrier will also continue to see capacity track up on a year over year basis as four of the seven aircraft added in FY2014 were added in the second half. According to the CAPA Fleet Database, Tigerair also has one more A320 on order, which is currently in Toulouse and should be ready for delivery.

As CAPA previously analysed, the group has cancelled its nine other remaining A320 orders, all of which were due for delivery in FY2015 and FY2016. The hiatus from fleet expansion improves Tigerair’s medium to long term outlook. But for at least the short term Tigerair continues to grapple with a fleet that is too large for its current needs.

If the group succeeds in subleasing the eight grounded aircraft the short term outlook would improve. But the sub-leases will still come at a cost and the group may still have to find new homes for the four aircraft remaining at Mandala if it sells its stake in the Indonesian carrier. The fact Tigerair has no alternative within the group for the aircraft at Mandala limits its option as it reviews its investment in Indonesia.

Tigerair Taiwan, which was established in late 2013, was initially viewed as a potential outlet for excess aircraft. But the group has since said that Tigerair Taiwan will source its own fleet after taking an initial two A320s from Tigerair to launch operations in 2H2014.

Tigerair Taiwan’s initial two aircraft could potentially be sourced from Tigerair Singapore, enabling the carrier to reduce capacity or improve utilisation. But the aircraft could also potentially come from Tigerair Mandala should the group exit its Indonesian investment or from some of the eight grounded aircraft should the group not succeed at sub-leasing all eight grounded aircraft. (The one aircraft remaining on order and currently sitting in Toulouse could also potentially be kept aside for Tigerair Taiwan.)

Retaining a fleet of at least 27 aircraft in Singapore could create challenges over the short to medium term. The huge influx of capacity added by Tigerair Singapore over the last two years has not yet been absorbed by Singapore’s relatively mature market.

Competition is intense in Singapore’s short-haul market and regionally in Southeast Asia. This is clearly reflected in the group’s poor performance from FY2014. Tigerair has warned that “due to an over-supply of capacity in the region, Tigerair continues to operate in a challenging business environment. It is expected that yield and load factors will remain under pressure.”

The decision to adjust capacity plans by grounding aircraft and cancelling orders are steps in the right direction as Tigerair tries to improve yields and load factors amid a challenging environment plagued by overcapacity. These are two important components of a broader turnaround plan aimed at returning the group to profitability after several years of losses.

Another important piece of the turnaround plan is reducing the group’s exposure to affiliates by pursuing a new asset-light strategy. This strategy began with the sale of a majority stake in Tigerair Australia in 2013 and continued with the recent divestment in the Philippines. A divestment in Indonesia is the likely next step along with the launch of Tigerair Taiwan with just a 10% stake from Tiger Airways Holdings.

But for now Tigerair continues to bleed, clouding the group’s short to medium term outlook. While there should be some improvements over the medium to long term, the group’s focus is now on recovering financially. Unfortunately some long-term initiatives, including building partnerships and connection traffic, has taken a back seat.

Tigerair needs to focus more on building up transit traffic, which remains an extremely small fraction of its total traffic despite the early 2013 launch of a transit product (Tigerconnect) and partnerships with Scoot, Cebu Pacific and SpiceJet. Scoot and Tigerair began working on offering joint itineraries in late 2012 but have yet to generate meaningful volumes.

A closer partnership could be implemented if Scoot and Tigerair are able to secure approval from Singapore competition authorities to coordinate schedules. If approval does come it will need to show initiative and move quickly to implement a stronger partnership. But even without approval Tigerair could take steps to boost connections with Scoot. There are also steps Tigerair could take to quickly improve connections with SpiceJet.

Changi Airport, which has seen traffic growth moderate significantly over the last year, and the SIA Group need Tigerair to take on more of a network role. For SIA, Tigerair is an essential component of its brand matrix in competing in a new Asian market profile as it fills the short-haul LCC role alongside long-haul LCC Scoot.

SIA has increased its investment in Tigerair – most recently from 33% to 40% in Dec-2013 – following a series of rights issues that failed to generate significant interest from other parties. SIA also has a loan to Tigerair which can be converted into a further 13% equity stake. A majority stake of more than 50% would trigger a required takeover bid.

SIA has so far preferred to wait patiently for Tigerair as it attempts to recover from its challenges. However, SIA ultimately may have little choice but to take over the LCC group. This would have made a lot of sense from Tigerair's beginnings but policy timidity prevented it occurring. The time is fast approaching where that timidity needs to be replaced by a much more forthright and forward looking approach.