Tigerair Australia has completed a challenging turnaround, with its first annual profit. The LCC, now a fully owned subsidiary of Virgin Australia, was profitable for the first time in its nine-year history in the year ending 30-Jun-2016.

Synergies with Virgin Australia, operational improvements and network adjustments have contributed to the transformation. Virgin Australia has joined its rival Qantas in employing an effective two brand strategy, with Tigerair Australia focused entirely on the leisure sector.

This is the first in a two-part series of reports on the recent performance and outlook for Tigerair Australia. This article will focus on its transformation and newfound profitability. The second will look at potential areas for future long-term growth, including in the international market and with partnerships.

Tigerair Australia, formerly known as Tiger Australia, launched services in Nov-2007. The LCC has since accumulated operating losses of more than USD250 million but was profitable for the first time in the year ending 30-Jun-2016 (FY2016).

Tigerair Australia has since dramatically improved its operating performance and profitability. A transformation programme began in mid-2013 after Virgin Australia acquired the initial 60%, under then new CEO Rob Sharp. A deal to acquire the remaining 40% for a token AUD1 was forged in 2014 and completed in Feb-2015. Full Virgin Australia ownership has enabled Tigerair Australia to pursue new synergies with its parent, helping the airline further reduce costs and achieve profitability ahead of target.

The closest the airline came to break-even during this period was in the year ending Mar-2010 (FY2010), its second full year in operation, when Tigerair Australia incurred a loss of less than SGD1 million. Losses ballooned in FY2012, when the airline was grounded for six weeks by the Australian regulatory body CASA. After resuming operations in Aug-2011, Tigerair Australia took several months to spool back up and even longer to rebuild its brand, resulting in more steep losses in FY2013 and FY2014. 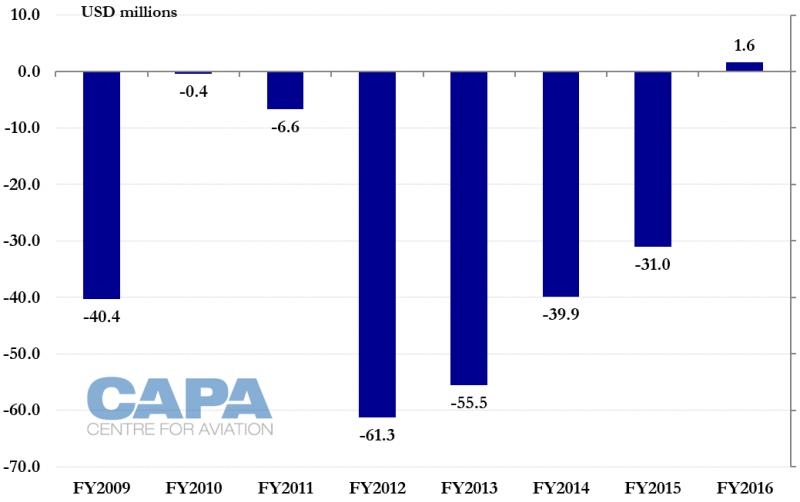 In addition to the losses outlined above, Tigerair Australia incurred an operating loss of USD11 million in the year ending Mar-2009, which covers the first five months of the airline’s operation. It also incurred a loss of USD11 million in the quarter ending Jun-2015, which was its last quarter under Tiger Airways Holdings. Tiger Airways Holdings’ fiscal year ends in March, whereas Virgin Australia’s fiscal year ends in June. 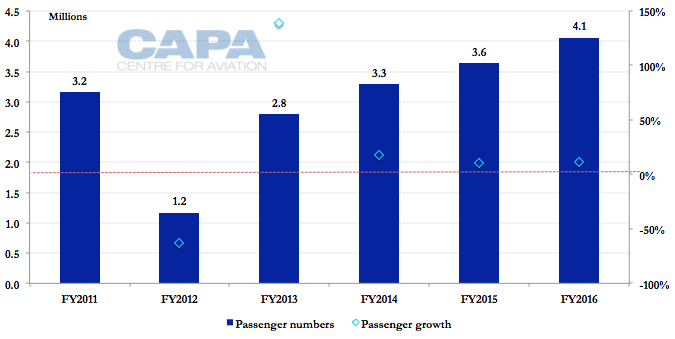 Note: All figures are based on fiscal year ending June
Source: CAPA – Centre for Aviation and company reports

However, growth has been relatively modest since the start of the transformation initiative, which has been a key driver in enabling Tigerair Australia to become profitable. The growth over the last two years has been mainly achieved by higher aircraft utilisation and load factor improvements.

Two years ago, in Aug-2014, Tigerair Australia served 12 domestic destinations with a fleet of 13 A320s. Over the last two years the airline has added only one aircraft to its operator’s certificate.

Tigerair Australia currently serves 11 domestic destinations with a fleet of 14 A320s. It launched international services to Bali in Mar-2016 but for now these flights are operated with three 737-800s wet-leased from Virgin Australia.

The network has been consolidated slightly by dropping Mackay in Sep-2015. Alice Springs was also dropped slightly more than two years ago, in Jul-2014. 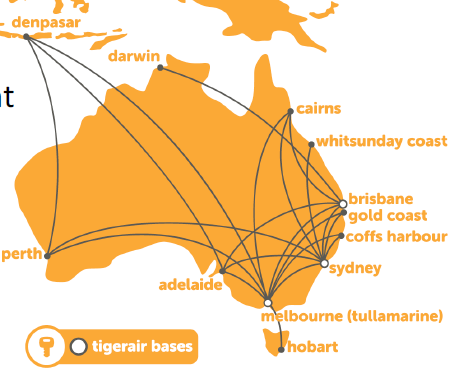 Tigerair Australia has pursued modest growth where it has noticed opportunities – or pockets of demand. Network adjustments have driven improvements in yields and unit revenues.

Tigerair Australia’s growth falls well short of the projections originally provided to competition authorities in 2013 when Virgin Australia sought anti-trust approval to take over the initial 60% stake. At the time, Tiger Airways Holdings and Virgin Australia Holdings said that they would increase Tigerair Australia’s fleet to 23 aircraft by Mar-2018, and they signalled the potential of growing the fleet to 35 aircraft.

As CAPA highlighted in a Sep-2014 report: “This commitment, it turns out, was not a guarantee." Given the recent losses and challenging market conditions expansion is not a commercially sensible option. It is no longer likely that Tigerair Australia’s will expand by more than a few aircraft over the next three years, which would leave it several aircraft behind the 23-aircraft level.”

See related report: Tigerair Australia to pause from growth – with possible A320 deferrals – as losses continue to mount.

Tigerair Australia is now planning to operate a fleet of only 17 aircraft at the end of FY2019. In May-2016 it announced plans to transition its fleet from A320s to 737-800s. The 14 A320s currently under its AOC will gradually be replaced on a one-for-one basis with 737-800s that are now operated by Virgin Australia.

The transition to 737s is an expensive project over the short term as the A320s need to be remarketed and pilots need to be trained on the new type. But over the medium term Tigerair Australia will be able to reduce its costs further as more synergies with Virgin Australia are pursued.

Leveraging Virgin Australia has been a key driver in the latter stages of the transformation, made possible once the acquisition of a 100% stake was completed in Feb-2015. Tigerair Australia is a relatively small airline but now essentially enjoys the same efficiency and scale as Virgin Australia.

CEO Mr Sharp pointed out in a 4-Aug-2016 presentation at CAPA’s Asia Pacific Aviation Summit in Brisbane that the new structure has enabled Virgin Australia to be nimble, and to focus on cost.

Under the three-year transformation programme Tigerair Australia also has improved operational stability. The airline has invested significantly in this area, enabling it improve customer satisfaction and rebuild a brand that had not been highly regarded.

Tigerair Australia had the highest on-time performance and lowest cancellation rate among Australian airlines in 2015 and again in 1H2016. This represents a dramatic improvement, given that the airline for several years ranked at the bottom in this metric.

Mr Sharp said that there was no “magic bullet” in improving operationally but work in several key areas came together. He cited investments in operational support infrastructure, product improvements and partnering with “best of kind” engineering companies.

Customer surveys prove that the airline has successfully transformed and the brand has fully recovered from the 2011 grounding.

Mr Sharp cited investments in new reservation and check-in systems, including mobile applications, in supporting the initiative to improve customer service. Tigerair Australia has also invested in a new iPad application for airport staff, which has led to more interface with customers and also improved ancillary sales.

The opening of a new dedicated low cost terminal in Melbourne has also helped improve customer service at Tigerair Australia’s main hub. Terminal 4 opened in Aug-2015, providing the first entirely self-service check-in facility in Asia Pacific. Tiger Australia was the first tenant of the new terminal, which is also now used by its rival – LCC Jetstar – and the regional airline REX.

Mr Sharp said that the terminal had “provided a significant step change” compared with the very basic facilities the airline had previously operated at in Melbourne. “That’s our busiest airport and it’s our home base so [it has been] very critical for the turnaround”, he said. 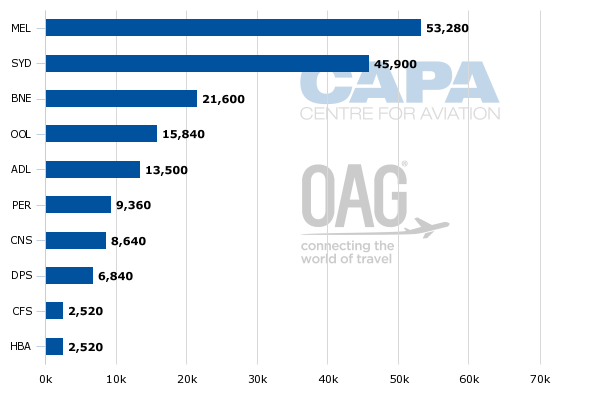 Under the leadership of Mr Sharp Tigerair Australia has been transformed to the extent that it has essentially started over from scratch. A new business has been created in Australia, replacing a business that was fundamentally led from Singapore, with a new culture and focus on innovation and agility.

The airline, however, remains focused entirely on the leisure market and maintaining a pure LCC model. It has no intention of pursuing business traffic, codesharing with its full service parent, or joining Virgin America’s Velocity frequent flier programme.

The current focus may limit growth opportunities but provides a sustainable niche with a strong prospect of continued profitability. As it approaches its tenth anniversary Tigerair Australia is finally profitable, and has a relatively certain future.

In Part 2 of this report, CAPA will look at Tigerair Australia’s initial performance in the international market and the possibility of international growth through more international routes, as well as through partnerships with like-minded LCCs.