Indonesia’s Mandala Airlines has resumed operations and emerged from bankruptcy as a new affiliate of Asian LCC group Tiger Airways. Mandala’s first flight in 15 months operates today (05-Apr-2012) on one of Indonesia’s largest domestic routes, Jakarta-Medan. But the new Mandala, which only operated domestic services before its Jan-2011 grounding, will focus primarily on international routes starting with Medan-Singapore and Jakarta-Kuala Lumpur.

Mandala last week announced Jakarta-Medan and Jakarta-Kuala Lumpur as its first two routes as a Tiger partner carrier, with flights commencing on 05-Apr-2012 and 04-May-2012, respectively. But Tiger’s booking engine indicates that Mandala will start operating international flights earlier - on 20-Apr-2012 with one daily frequency on the Medan-Singapore route. More routes, primarily international but also some domestic, are expected to be added over the next few months as Mandala rapidly spools up its fleet of Tiger-sourced Airbus A320s.

Jakarta-Kuala Lumpur is a highly competitive route with Tiger’s archrival, the Malaysia-based AirAsia Group, accounting for the largest share of capacity. The AirAsia Group now offers seven daily flights between Jakarta and Kuala Lumpur and accounts for 35% of total capacity on the route (includes a 20% share from Indonesia AirAsia and 15% from AirAsia’s main Malaysian unit). Full-service flag carriers Malaysia Airlines and Garuda along with Indonesia’s largest LCC Lion Air are the other main operators on the route. 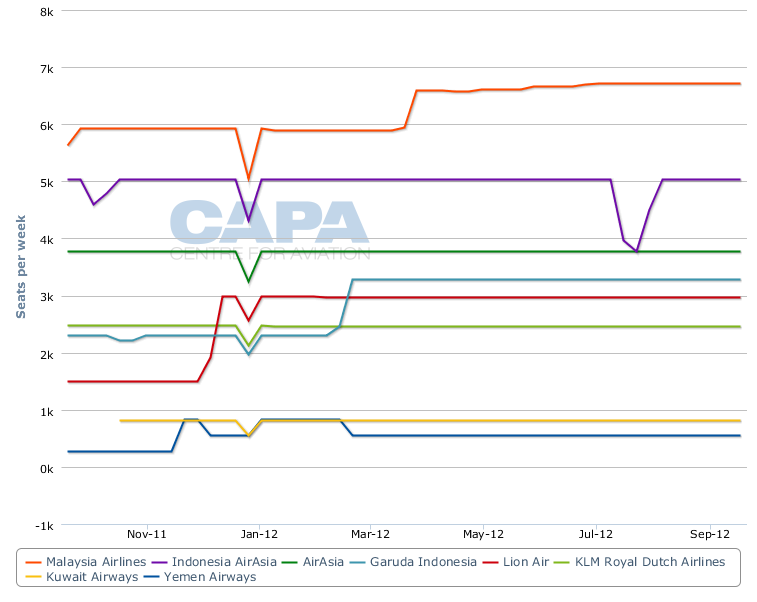 Mandala announced last week it would operate 14 weekly flights between Jakarta and Kuala Lumpur. Tiger’s booking engine indicates the route will be served initially with one daily flight from 04-May-2012, expanding to two daily flights on 01-Jun-2012. The two flights will give Mandala just under 10% of the total market, slightly smaller than Lion, which operates two daily flights between Jakarta and Kuala Lumpur with larger Boeing 737-900s. Garuda operates three daily 737-800 flights on the route while MAS offers six daily flights, primarily with 737-800s.

Medan-Singapore is a smaller route which is currently served by three carriers – Singapore Airlines regional subsidiary SilkAir, Indonesian full-service carrier Batavia and Jetstar Asia subsidiary Valuair. SilkAir is the largest carrier on Medan-Singapore, with two daily flights and a 48% share of current capacity. Batavia has a 27% share of capacity and one daily flight while Valuair has six weekly flights and a 25% share of total capacity. Tiger will have a slightly larger share than Batavia and Valuair but still fall well short of SilkAir’s offering. 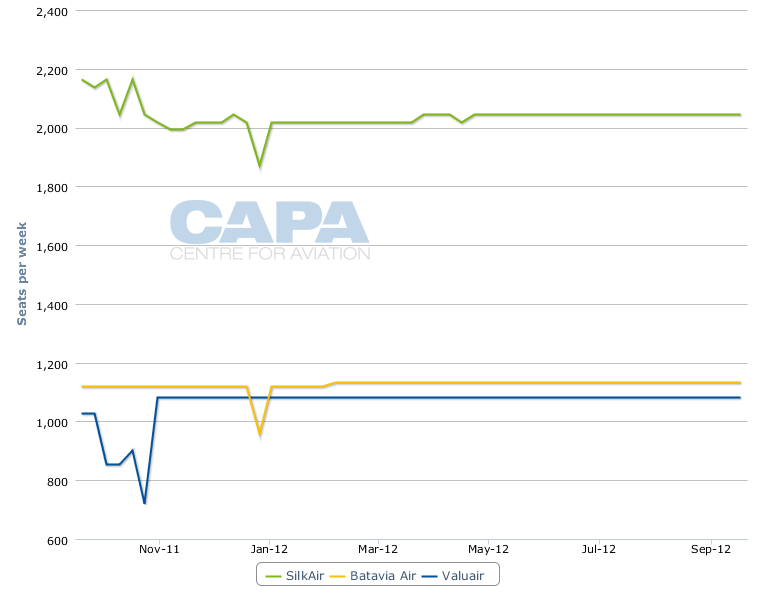 By quietly launching Medan-Singapore without any announcement from Mandala or Tiger, the two carriers could be looking to pre-empt a potential move by Indonesia AirAsia. Indonesia AirAsia already serves four routes between Singapore and Indonesia and is keen to further expand its share of the Singapore-Indonesia market, where it is already the second largest carrier after Singapore Airlines.

Tiger is now the smallest LCC in the Indonesia-Singapore market

With only a 2% share of capacity, Tiger is now the fourth largest LCC in the Indonesia-Singapore market – well behind Indonesia AirAsia (19%), Lion Air (12%) and Jetstar/Valuair (8%). Tiger’s acquisition of a 33% stake in Mandala should allow Tiger to catch up with its Asian LCC rivals in this key market, which is one of the largest in Asia, as Tiger will benefit from having a local Indonesian brand it its portfolio. Tiger also stands to benefit as it will now have access to traffic rights from both the Singapore and Indonesian sides.

Tiger currently operates only one route between the two countries: Singapore-Jakarta. With Mandala now part of Tiger, the group is expected to significantly expand its Singapore-Indonesia network as well as capacity on the key Singapore-Jakarta route. Tiger now operates two daily flights between the two capitals, which is the world’s second largest international route by capacity and the largest route (domestic or international) in all of Southeast Asia. For now there are no indications in Tiger’s booking engine of any Mandala-operated capacity on this route, but Mandala will almost certainly request Jakarta-Singapore traffic rights from Indonesian authorities if they become available.

Jakarta-Medan is one of the three largest domestic routes in Indonesia along with Jakarta-Surabaya and Jakarta-Denpasar (Bali). Each of these routes now have roughly 100,000 weekly seats, making them among the 20 largest routes in the world.

It appears Tiger and Mandala have a clear strategy of entering some of Indonesia’s largest routes, where there is likely to be sufficient demand despite the intense competition. On Jakarta-Medan, Mandala will compete with five carriers: Garuda, Citilink, Batavia, Lion and Sriwijaya. Tiger’s booking engine indicates Mandala will start with one daily flight on Jakarta-Medan, increasing to two daily flights on 02-Jun-2012.

While Mandala will likely add a few more domestic trunk routes, it is expected to primarily operate international routes to existing Tiger markets in Southeast Asia. Under previous ownership, Mandala was focussed on the domestic market but with Tiger now involved the situation is different as the risk of launching international routes is significantly less because Tiger already has a recognized brand throughout the region and already has infrastructure in place in all major ASEAN markets. Mandala can leverage this existing infrastructure and use Tiger to help with point of destination sales – following a similar strategy that has been used by AirAsia as it added affiliates in Indonesia, Thailand and most recently the Philippines.

The new Tiger-backed Mandala will compete against three powerful LCCs in the Indonesian market – Lion Air, Indonesia AirAsia and Garuda Indonesia budget unit Citilink. These carriers combined now operate about 100 aircraft and are all expanding at high double-digit rates. Mandala will also have to compete against Garuda’s fast-expanding mainline operation and three second tier Indonesian carriers – Batavia Air, Sriwijaya Air and Merpati Nusantara Airlines – which also currently operate a combined fleet of about 100 aircraft and offer low fares, although they are not generally considered to be LCCs.

International traffic in Indonesia grew 13% last year to 10.8 million passengers and was up by another 15% in Jan-2012. More rapid growth is expected given the relative small base of Indonesia’s international market (Indonesia’s domestic market is about five times larger). As Indonesia’s economy improves and its middle class grows, a larger portion of Indonesia’s 240 million people will have the means to travel abroad. More short and quick trips within Southeast Asia, with low fares by airlines like AirAsia and Mandala/Tiger stimulating demand, could easily lead to Indonesia’s international market quickly doubling or tripling within the next few years. Such growth could be sufficient to support all four local LCC brands. 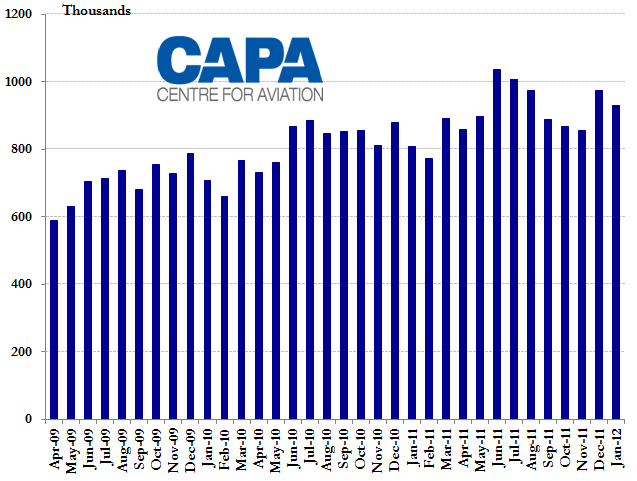 Tiger Airways CEO Chin Yau Seng told reporters in Jakarta last week he was optimistic with Mandala’s prospects despite the intense competition in the Indonesian market. “The good thing is the market is also growing, so while low-cost carriers will grow their frequencies and networks, I think there will be quite a bit of new demand,” Chin said.

Tiger only had to pay a token one dollar for its 33% stake in Mandala, giving it a low-risk opportunity to expand its brand into Asia’s fastest growing market. Tiger, however, is providing the Indonesian carrier with aircraft, expertise and a loan.

All of Mandala’s initial A320s are being leased via a third-party company from Tiger. Mandala’s new president, Michael Coltman, comes from Tiger. Mandala has adopted Tiger’s low-cost model and is using Tiger’s website/booking engine, but will retain a separate branding. Mandala's new A320s have the traditional Tiger tail but Mandala is still printed on the body of the aircraft.

Indonesian investment group Saratoga owns a majority 51.3% stake in the new Mandala while Tiger holds a minority 33% stake and the remaining 15.7% is held by the carrier’s original shareholders and creditors. Indonesian transport group Cardig and US investment firm and global LCC specialist Indigo Partners, which was also a founding shareholder in Tiger, owned Mandala until it suspended operations and filed for bankruptcy. Creditors such as engine manufacturer IAE also ended up with small stakes in the new Mandala as part of the restructuring/re-launch deal approved by Indonesia’s bankruptcy court.

Saratoga and Tiger have extended Mandala a loan to cover operating costs Mandala until the carrier, which has a long history and originally was owned by the Indonesian air force, can become profitable. Saratoga CEO Sandiago Uno told reporters in Jakarta last week that “Mandala was once a glorious airline” and the firm aims “to re-establish the airline to once again be a valuable asset to the country”.

Mandala to quickly expand A320 fleet

Mandala already has taken delivery of three ex-Tiger A320s. But the carrier’s schedule through early June only requires one aircraft (for May, the one aircraft will operate a Jakarta-Medan-Singapore-Medan-Jakarta-Kuala Lumpur-Jakarta routing which requires 16 hours including turnaround times) . A second aircraft will be required in early June, when a second frequency on the Jakarta-Medan and Jakarta-Kuala Lumpur routes are added.

Tiger now plans to allocate Mandala another seven of its A320s by the end of its current fiscal year (which goes through Mar-2012). More routes are expected to be announced over the next several months as Mandala expands its fleet from thee to 10 aircraft.

Almost all eight of the aircraft Tiger is planning to add this fiscal year have been allocated to Mandala (the only exception is one A320 now earmarked for Tiger Australia). Tiger has the aircraft to support rapid expansion at Mandala because its main operation in Singapore has been suffering from over-capacity and under-utilization in recent months while its Australia-based fleet has been significantly under-utilised since Tiger Australia resumed services in 3Q2011 following a six-week grounding.

Tiger says its main Singapore unit is currently offering 93,960 seats per week, which is a slight decrease compared to the capacity provided in the last few months of 2011. Tiger says its Australian operation is now offering up to 47,880 seats per week, which still represents a significant decrease compared to its pre-grounding schedule in 2Q2011.

Tiger now operates 20 A320s in Singapore, representing a slightly smaller fleet than a couple of months ago as some of Tiger Singapore's aircraft have been repositioned to Indonesia. While Tiger continues to add some new destinations, such as Dhaka in Bangladesh and Colombo in Sri Lanka, it has been cutting back in other areas and working to improve utilisation by shrinking its fleet.

In addition to the 20 A320s in Singapore and three A320s in Indonesia, Tiger now has 10 A320s in Australia, where it is continuing to gradually build back its operation, and two A319s in the Philippines. With growth in the Philippines now unlikely given Tiger’s inability to conclude an agreement with SEAir and insufficient demand to support significant fleet growth in the Singapore or Australia markets, Mandala could also end up operating most of the nearly 30 A320s Tiger has or order for delivery in 2013 and beyond.