Ryanair recently held up the US air traffic management system as something that Europe should be emulating to help fix the problems with its fractured and expensive ATM system. Yet, the US system has a long way to go before it manages to solve its own problems and deliver the major step forward in airspace efficiency that airlines are calling for.

One in four flights delayed in 2007

The NEXTOR study by the University of California, Berkeley’s Institute of Transportation Studies has revealed that in 2007, flight delays across the US airspace system cost the US economy USD32.9 billion. While the year was the worst on record in terms of flight delays – with 24% of all domestic airline flights more than 15 minutes late and 2% cancelled – it is also indicative of the cost of flight delays not just for airlines, but for the broader US economy.

The US Federal Aviation Administration sponsored report analysed a variety of cost components caused by flight delays, including cost to airlines, cost to passengers, cost of lost demand, as well as the indirect impact of delay on the US economy. The study particularly notes passenger delay cost estimates, which recognise that flight cancellations and missed connections can lead to substantial passenger delays not revealed in traditional flight delay statistics.

Passengers bear most of the cost

The study reveals that the direct costs of flight delays are USD28.9 billion, of which passenger bear more than half. The cost of passenger time lost was of estimated at USD16.7 billion, due to airline and passenger schedule buffers, delayed flights, flight cancellations and missed connections. Another USD3.9 billion was estimated as lost due to the opportunity cost incurred by passengers who avoid air travel as the result of delays, whether real or anticipated.

The NEXTOR study estimated that air transportation delays reduced the 2007 US GDP by USD4 billion. Inefficiency in the air transportation sector “increases the cost of doing business for other sectors, making the associated businesses less productive”.

Airlines shouldered USD8.3 billion in costs from 2007 flight delays. The majority of expenses related to increased labour expenses, higher fuel burn and maintenance costs, as well as other associated expenses. However, nearly half of the costs relate to "hidden" delays: additional time airlines build into their schedules in anticipation of delays in the network.

According Oxford Economics data cited in the report, business travel accounts for approximately 50% of money spent on US domestic air travel. Each dollar spent on business travel is estimated to earn a return of approximately USD12 in increased revenue to the traveller’s employer. In 2008, the US Travel Association of America reported that frustration among travellers at delays resulted in them avoid a potential 41 million air trips – including 12 million business trips – between mid-2007 and mid-2008.

The SJEC report estimated that passengers were delayed by 320 million hours in 2007, with delayed flights consuming some 740 million additional gallons of jet fuel, at a cost of USD1.6 billion.

Less than 6% of delays are due to situations outside of direct control, such as security problems or extreme weather conditions. While 94% of all flight delays were caused by US ATM delays, internal issues with airlines or knock-on affects due to other flights arriving late.

2007 flight delays by cause 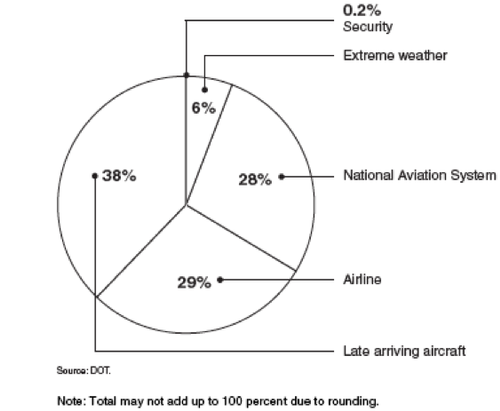 Between 1998 and 2007, the total number of flight delays and cancellations in the US increased 62%, while the number of scheduled operations has increased 38%. At the same time the average length of flight delays grew from 49 minutes in 1998 to almost 56 minutes in 2007, and far more flights were affected by long delays of more than 180 minutes.

At key US hubs, the trend delay trends have been even worse. New York’s three main airports are among the most crowded and delay-prone in the US. Between 1998 and 2007, flight delays and cancellations at these airports increased 11%, while the number of domestic operations jumped 57%. The knock-on affects from New York region airport delays accounted for 47% of arrival delays at other US airports in 2009.

Since 2007, as the recession cut passenger traffic flight numbers, flight delays have retreated from their peaks and eased pressure on the US air transport system. In 2009, 79% of flights arrived on time, increasing to 82% over the first eight months of 2010. The FAA has set an 88% on-time arrival performance target for the US national airspace system. Increased runway capacity at Chicago O’Hare, Seattle-Tacoma, Washington Dulles and Philadelphia have also contributed to the reduction. 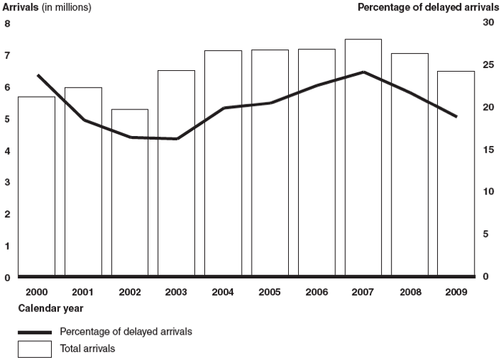 The FAA estimates domestic flights in the US will return to their pre-crisis levels by the end of 2012, possibly earlier. Following the adoption of some early elements and features of NextGen - offering improved systems for communications, surveillance, navigation and overall AMT - capacity in the system has expanded since the beginning of the recession, although to what extent is unclear.

Overall US traffic is expected to increase by 30% between 2012 and 2025. Without “substantial upgrades” to aviation infrastructure, this level of growth could result in unprecedented levels of flight delays by 2025. While investment in the US national aviation system has accelerated, technological and infrastructure development may be unable to keep pace unless more funds are committed by the US government and private aviation stakeholders.

The FAA estimates that full implementation of NextGen could cut US flight delays by 21% by 2019, measured against a baseline case of no action. 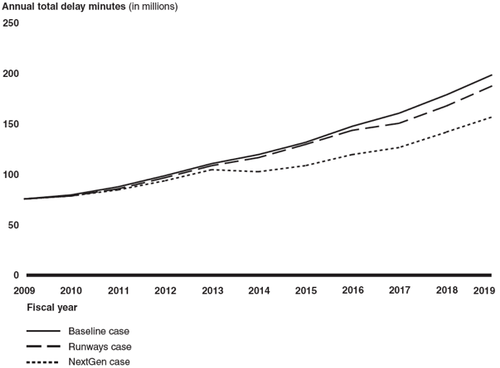 Full implementation of NextGen is only a partial solution to the flight delay issue, as it will not eliminate the majority of airline flight delays or provide the impetus for airlines to adjust their scheduling behaviour.

According to the NEXTOR study, just one third of US flight delays are attributable to problems or restrictions in the US national air traffic control system. Almost all of the remainder was caused by “internal problems” at airlines themselves, and the cascading effect on subsequent flights.

The NEXTOR report strikes a hopeful chord for the progress of air traffic management in the US. Its authors believe that new aviation technologies and procedures, including those associated with NextGen, coupled with appropriate government policies and infrastructure investments, have the “potential to reduce the identified costs by a very large percentage”.

Not everything is rosy though. Any increase in capacity from the adoption of NextGen and associated technologies would result in a new equilibrium in the system, which would be “very difficult to predict”. The gains from NextGen and other aviation infrastructure investments will be “greatest if they are combined with policy innovations”. These could include controversial demand control measures, such as adjusting the pricing of ATM resources and services upwards and setting more realistic flight capacity limits at airports.

According to the US Government Accountability Office, actions by the US Department of Transportation and the FAA could help reduce delays over the next two to three years. These actions are generally being implemented at bottleneck airports that contribute to the most delays in the system, such as Atlanta, Chicago and those in the New York region.

The FAA has capacity enhancement programmes underway, including airport investment, accelerated implementation of near-term elements of NextGen and other air traffic management improvements. However, the extent to which these actions will reduce delays at individual airports or contribute to the agency’s overall target is unclear. While capacity enhancement will certainly reduce delays, a number of factors such as such as airline scheduling and business practices contribute to poor on time performance.

As these are largely are outside of direct US DoT/FAA control, the controversial demand management measures will again become an option. These could include policy measures or economic incentives or penalties aimed at changing airline behaviour. The effect of punitive measures would be unsatisfactory to most aviation stakeholders, even if they did reduce flight delays.

No course of action is ever going to eliminate flight delays, the system is simply too complex and too dependent on interrelated factors and airline behaviours necessitate the tight scheduling of services. The reform of the US air traffic system is ongoing, but more steps are still necessary to relieve the pressure that will begin to mount on the US air traffic system once demand and airline capacity returns to normal. However, the efficiency and capacity of the system, and the cost of delays, can undoubtedly be enhanced to ensure that the problems of 2007 are not repeated.