The airline base concept: European LCCs love to base aircraft and crew abroad, unlike others

easyJet's announcement on 25-Sep-2013 that it would open a new base in Hamburg illustrates the success of the European Union’s decision to liberalise its aviation market in the 1990s. The UK’s largest airline owes its success largely to these reforms, which allow any EU airline to fly from anywhere to anywhere within the bloc. Hamburg will be its 23rd base. No-frills rival Ryanair also took advantage of European liberalisation and now has 57 bases (including two outside Europe).

Nevertheless, there are still some barriers to this liberalisation. A recent court judgement ruled that Ryanair should have paid French social charges in respect of its employees based at Marseille, whom it employed on Irish labour contracts.

What is meant by an airline base? Why have Europe’s LCCs established so many foreign bases and why is the practice of basing aircraft and crew away from an airline’s home market rare outside Europe?

What is an airline base?

A base is an airport at which the airline permanently bases aircraft and crew and from where it operates routes. Both fleet and personnel return to the base at the end of the day. The aircraft based at the airport do not necessarily always have to be the same tail numbers, but the airline will typically keep a consistent complement of aircraft at a base.

In reality, carriers such as Ryanair and easyJet use the aircraft in their fleet flexibly across their networks, but generally ensure that each of their bases has its allocated number of aircraft at the end of each day. Routine aircraft maintenance and repair services are also typically carried out at a base, although heavy maintenance will be concentrated at a small number of locations.

A base differs from ‘overnighting’ in that the crew spend the night in their own homes, rather than in a hotel. In addition, while it is quite common for airlines to hire local cabin crew in a destination away from their main hub, that location is not considered a base unless the carrier also permanently keeps aircraft there.

European LCCs are the biggest exponents of foreign bases

The biggest exponents of the use of foreign bases are European low-cost carriers. The two largest, Ryanair and easyJet, have 57 and 23 bases respectively. In addition to its main hub at Barcelona, IAG’s LCC subsidiary Vueling bases aircraft at Paris Orly, Rome Fiumicino and Amsterdam.

This embracing of the concept of foreign bases by European LCCs reflects their response to the growth opportunities presented by the liberalised EU aviation market. Peculiarly, although the liberalised marketplace is equally open to legacy carriers, very few have set up operational bases outside their home market.

Moreover, differences in employment practices across Europe, particularly relating to social insurance and taxation, mean that there are still some market distortions.

Ryanair said on 2-Oct-2013 that it will appeal the ruling by a court in Aix-en-Provence, which ordered it to pay fines and damages amounting to EUR8 million in connection with the non-payment of social charges for Ryanair staff flying from its Marseille base between 2007 and 2010. These crew members were working on aircraft registered in Ireland and Ryanair employed them on Irish contracts. The airline paid Irish social charges, which are considerably lower than those in France. Ryanair argues that this complied with EU law applicable to mobile workers in air transport.

A French Decree in 2006 required airlines in France to pay staff under French contracts and pay French social charges. Ryanair closed its Marseille base as soon as it was challenged over this, but continues to operate many routes to and from the southern French city using aircraft and crews based elsewhere in Europe.

Norwegian Air Shuttle is pushing the LCC base concept beyond Europe

Norwegian Air Shuttle plans a new subsidiary, reportedly to be named Norwegian Air Norway, which will operate in new markets in Europe and register aircraft outside Norway.

According to COO Asgeir Nyseth: “We may need a new AOC to fly internally between some EU countries. Norway does not have the same agreements with all countries, so therefore it is complicated to fly with an ordinary Norwegian license. For example, if we want to fly between a future base in Germany to other EU countries.”

Norway’s civil aviation authority is yet to process the application, but this initiative will, in effect, place Norwegian on the same footing as other European LCCs. It already has European bases outside Scandinavia at London Gatwick and at Spain’s Malaga, Las Palmas and Alicante.

Monthly gross salary (NOK) in Norway and selected other countries 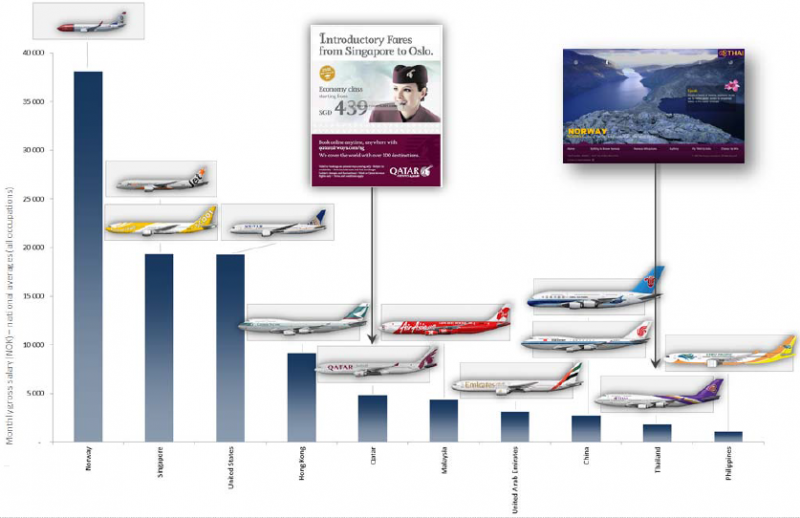 Services from Copenhagen, Oslo and Stockholm to Fort Lauderdale in Florida will commence end Nov-2013/start of Dec-2013 and it plans to start hiring pilots and cabin crew in Fort Lauderdale ahead of these route launches. Norwegian has said it will employ 250 to 350 people at its US bases in New York and Fort Lauderdale.

Norwegian is also believed to be seeking an Air Operator’s Certificate (AOC) and an Air Carrier Operating Licence (ACOL) from the Irish Commission for Aviation Regulation (CAR) after obtaining temporary approval from CAR to register its fleet of six Boeing 787-8 aircraft in Ireland under an arrangement which will expire on 24-Dec-2013. The Irish registry may provide a means to circumvent restrictive Norwegian labour laws which prevent airlines from hiring lower cost flight attendants from Asia, facilitating the establishment of its Bangkok crew base.

Examples from outside Europe of foreign aircraft bases are rare

As noted above, it is common for airlines, in particular long-haul airlines, to hire local flight crew in major foreign destinations. This can offer advantages in terms of linguistic skills and cost savings (both in terms of crew accommodation and wages, depending on local labour rates).

For example, Qantas flights to London are operated by London-based cabin crew on the Dubai to London leg (as used to be the case when Qantas operated to London via Singapore). Air New Zealand also has flight attendants based in London. This clearly offers savings on crew accommodation costs in London. Similarly, United has cabin crew based in Tokyo and Hong Kong and Cathay Pacific has cabin crew and pilots in Canada, the USA, Australia and Europe.

These, and many other examples, cannot be considered bases in the same way as those established by Europe’s LCCs as the crew merely operates from the foreign location to the carrier’s main hub (or, as in the Qantas example, to a stop-over point between the foreign location and the main hub). There are some examples outside Europe of airlines basing aircraft in foreign locations, although this is less common.

easyJet and Air France-KLM: percentage of staff employed in home country* versus internationally 2012**

Delta Air Lines bases a number of Boeing 757s at Tokyo Narita for flights on routes within the Asia-Pacific region, including to Pacific islands such as Saipan. This dates back to the days of Northwest Airlines, which also had some A320s at Narita. Iberia used to base some narrowbodies at Miami, which it used as a hub to Latin American destinations, although this is no longer in operation. These two examples are closer to the kind of base operated by LCCs from foreign locations in Europe.

AirAsia’s Malaysian operator based one A320 in Singapore until quite recently and the Indonesian affiliate is now considering basing an aircraft there. Australian Jetstar Airways has based A330 aircraft in Singapore, while its Singaporean associate Jetstar Asia only operates A320s.

In spite of these latter two examples, the approach of LCCs in Asia-Pacific, such as AirAsia, Jetstar and Tigerair, is different from that of European LCCs.

The absence of a single market limits the scope for LCCs to roll out across the region using the same carrier. These are international markets, governed by bilateral air services agreements and all of the market entry restrictions inherent in that.

Instead, in order to allow local establishment, they have been permitted to create minority owned associate companies, with local investors taking a controlling interest, operating in new countries under a licence/franchise agreement - so-called cross border joint ventures. These conform with bilateral agreements in ensuring that "substantial ownership" exists in the designating country's airline, even where it may not always be clear that "effective control" also resides there.

LCCs lead the way in this form of base establishment

Examples of fully fledged bases, involving both aircraft and crew, established by airlines in foreign destinations (i.e. in countries that are not the carrier’s home market) are rare outside Europe. This is mainly because bilateral air service agreements governing traffic rights would generally limit the use of the base to operating flights between the base and the carrier’s home, although third countries could be served where fifth freedom rights have been granted.

In Europe, LCCs have adopted the base concept to pursue point to point growth opportunities, including triangulation, arising from the liberalised aviation market.

While not generally offering a transfer product, the use of bases has provided LCCs with some of the efficiencies offered by more traditional hubs.

Even within the fully liberalised European market, examples of foreign bases are very rare for airlines other than LCCs. Legacy carriers have tended to continue to focus on their main hubs, using foreign destinations either to feed the hub or purely on a point to point basis. There is no single reason for this and some minor attempts have been made; arguably too consolidations like British Airways-Iberia and Air France-KLM deliver multiple hubs. Equally, as they increasingly use low cost subsidiary airlines to service short haul needs, these can be considered to involve the creation of new hubs.

But it appears that otherwise, full service airlines, often "encumbered" by national branding and network hub operating strategies, prefer to stay at home and focus on protecting their fortresses.

Where they do exist, examples outside Europe have been motivated mainly by crew wage and accommodation cost saving opportunities and, more rarely, by the seeking of hub-and-spoke economies (where appropriate traffic rights have been granted).