On the other end of the spectrum, Skywest Airlines’ shares slumped 5.3% yesterday. Last week the Western Australian Department of Transport selected the airline as the preferred proponent for a further licence of five years for continuing air services for the regulated proportion of the coastal network.

Virgin Blue, at its AGM on 24-Nov-2010, declined to provide an earning forecast although CEO John Borghetti stated trading conditions are “improving”. Local yields are holding up while the V Australia international arm is on track to break even (or get close to break even) by Jun-2011. Mr Borhgetti added: “We are looking to strategic initiatives to improve margin in the second half of 2011/12.” Shares in Virgin Blue gained 2.3% yesterday.

China Eastern Airlines stated it aims to cut its assets-to-liability ratio to 70% in one to two years time. Shares in the carrier declined 0.2% in Hong Kong trading but gained 1.1% to CNY7.17 in Shanghai. Shandong Airlines' shares gained 5.3% while Hainan Airlines’ shares were 4.1% stronger.

In the Koeran market, Korean Air Lines shares declined 2.0% in Seoul trading yesterday and Asiana Airlines’ shares slipped 1.6% in the wake of North Korea’s attack on South Korea. Japanese shares fell as they resumed trade after a holiday. 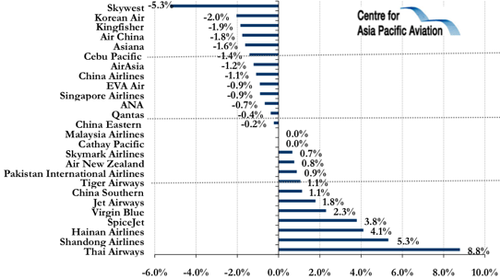