Thai Airways International is moving forward with plans to launch new regional carrier Thai Wing despite the possibility of a change in management and strategy after Thailand’s new government comes to power. The new government is also being asked to quickly make a decision on Thai’s proposal to launch a joint venture low-cost carrier with Tiger Airways.

It is widely expected the change in power will lead to a new CEO being appointed at Thai Airways International as the current CEO, Piyasvasti Amranand, was appointed after the Democrat Party took over at the end of 2008.

Mr Amranand took the helm of Thai Airways in Jun-2009 and has led a strategic shift, focussing on renewing the fleet, improving the premium product and responding to growing low-cost competition by proposing the launch of two new carriers – Thai Tiger and Thai Wing. Mr Amranand also is widely credited for driving out corruption at Thai Airways and reducing government meddling in the carrier. The Thai government still owns 51% of Thai Airways.

While CEO changes are typical at Thai after a new government comes to power, it is too early to say if yet another strategy shift will be pursued. For now Thai Airways is pressing on with its new strategy, including preparations to launch Thai Wing in Mar/Apr-2012.

New government not expected to result in changes to fleet plan

For example, Thai has already fully committed to the next phase of its ambitious fleet renewal programme, having secured final approval in Jun-2011 for the acquisition of 37 aircraft for delivery between 2012 and 2017. This includes Thai Wing’s initial fleet of 11 A320s.

Mr Dullayapong also pointed out the establishment of Thai Wing does not require government approval because the new carrier is being set up as a unit under Thai Airways rather than as a new subsidiary. Thai Tiger, however, is a different story as it is a completely new entity with Thai Airways holding a 51% stake.

Thai Tiger was originally planning to launch operations in early 2011 but had to postpone its launch after the outgoing government refused to decide on its application. Mr Dullayapong says the proposal to establish Thai Tiger will be “reconsidered” but Thai Airways first “needs to wait until the new government comes in”.

It could take a few months for a decision on Thai Tiger as Ms Yingluck will clearly have a lot on her plate after she takes office. But Mr Dullayapong says “we would like to see a quick decision because we are in a competitive environment”.

The delay in approving Thai Tiger has already benefitted Thai AirAsia, which has been expanding rapidly and now operates more than 25 routes from Thai Airways’ Bangkok Suvarnabhumi hub. As a group, AirAsia now serves all 20 of Suvarnabhumi's largest markets.

International capacity at Bangkok Suvarnabhumi by carrier, 4 Jul-2011 to 10 Jul-2011 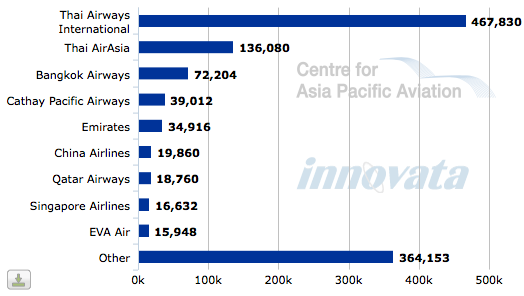 Thai Tiger plans to only operate international routes and follow a low-cost or ultra low-cost model. Thai Wing is planned as a new full service carrier but operating under a lower cost structure than Thai Airways mainline. Thai Wing will likely take over some of Thai’s thinner international routes such as Bangkok-Vientiane as Thai mainline phases out its remaining B737-400s and switches to all-widebody fleet, following a similar model used by the Singapore Airlines Group and its regional subsidiary SilkAir. 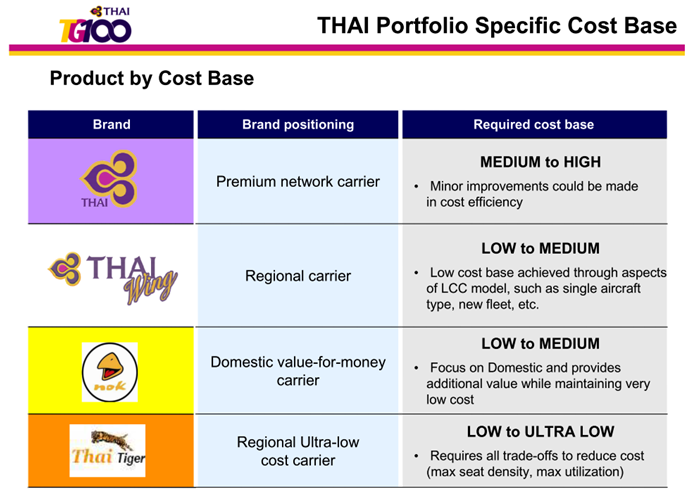 But if Thai Tiger does not get approved, Thai Wing could by itself provide the Thai Airways Group a sufficient response to the growing low-cost competition at Suvarnabhumi. Thai does not want to be left with a rejection of Thai Tiger and no other alternative because it has a pressing need to respond to growing low-cost competition in its home market. By moving forward with Thai Wing, Thai Airways management seems to be hedging its bets in case the new government does not want to proceed with Thai Tiger.

While Thai and Tiger say they remain committed to the joint venture and have extended their original agreement through the end of Aug-2011 in hopes of securing approval from the new government, it seems unlikely the new airline will be approved. The outgoing government, in particular the transport minister, was already cold to the concept of Thai partnering with a foreign carrier.

It is hard to imagine the new government being any warmer to the concept of launching a new low-cost carrier with Tiger. The Shinawatra family was a founder and former 50% stakeholder in Thai AirAsia (they sold their stake in Jan-2006). As AirAsia and Tiger are archrivals, Ms Yingluck may be reluctant to support the latter. Tiger’s current problems in Australia could also cause additional resistance to approving a new Tiger affiliate in Thailand.