Thai Airways plans to take a break from capacity growth in 2014 as the group battles challenging market conditions. But demand, which has been impacted in recent months by the civil unrest in Bangkok, is expected to recover in 2H2014 and Thai Airways’ medium to long-term outlook should see improvements as its new multi-brand strategy beds down.

The carrier has temporarily suspended several flights in 1H2014 in response to weakening demand. The suspended flights are expected to be again operating by 3Q2014. Thai Airways also plans to add capacity in some markets in 2H2014, including China and Japan, but is not planning to add any new destinations this year.

Thai Airways has been impacted by civil unrest in Bangkok

Market conditions in Thailand have been tough since political protests began in the capital Bangkok in Nov-2014. The civil unrest has continued for several months, leading to political uncertainty and impacting demand. While the Bangkok market is now starting to recover, the peak season for tourism was essentially ruined. 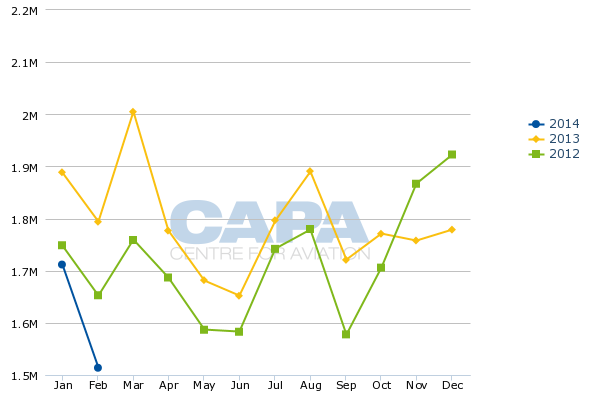 Revenues were up only 1% in 2013 despite an 8% increase in passenger traffic and 5% increase in RPKs while costs increased 9%.

Thai responded in Feb-2014 by cutting capacity as ASKs were down 1% year over year. But the drop in RPKs was sharper, at 14%, resulting in an eye-opening 10.4pts fall in load factor to only 70%. The carrier has clearly been impacted by Thailand’s sagging tourism sector, which has reported a 7% drop in arrivals year over year for 1Q2014. 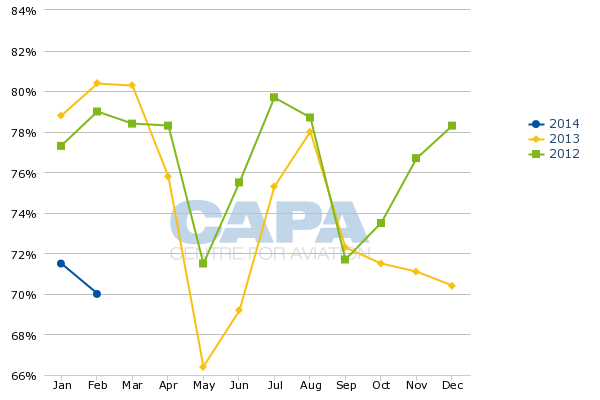 Current capacity levels are down 4% to 5%

Thai Airways has continued to make capacity adjustments, which should help its performance in 2Q2014. Thai Airways acting president Chokchai Panyayong said in a recent interview with CAPA that he was hopeful demand will improve by Jun-2014, allowing capacity levels to be fully restored in 2H2014.

Mr Chokchai, who also continues to serve in his permanent role as senior executive VP for strategy and business development, says capacity levels are currently down 4% to 5% on an ASK basis. Thai's frequencies are down by about 10% as the carrier has predominantly cut back on regional routes. For example, on the Bangkok-Singapore route Thai Airways has suspended two of its five daily frequencies.

Mr Chokchai says the current plan is for Thai Airways to start building back capacity in Jun-2014 and for all the suspended flights to be restored in 3Q2014. But he warns that the group is still monitoring the situation day by day and its capacity plans could change, although the group is confident it sees “the light at the end of the tunnel”.

While Thai Airways will be the only main airline group in Southeast Asia to not grow capacity in 2014, the hiatus from expansion is logical given current market conditions. Thai Airways is also accustomed to adjusting capacity during difficult periods. For example its ASKs were up only 1% in 2012, when demand was impacted early in the year by floods in Bangkok.

Back in 2009, when there was also a period of political unrest and demand was impacted by the global financial crisis, ASKs were down 5% year over year. 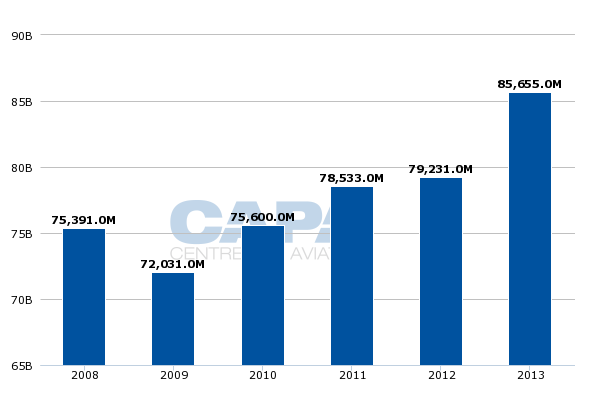 Thailand has proven over and over again to be a remarkably resilient market. Thai Airways and other local carriers are clearly banking on a full recovery and tourists coming back to Bangkok once the instability is resolved.

There are already some signs of tourism in Bangkok starting to recover. Other tourist destinations in Thailand have not been significantly impacted, providing passengers with the option of skipping Bangkok and flying directly to other airports such as Phuket, Samui and Chiang Mai.

Thai Airways also has been increasing its focus on international transit traffic. Mr Chokchai says transit traffic is up significantly and pointed to markets such as Japan-Australia in which the carrier has been particularly active in promoting.

Japan-Australia is a logical market to push as it is relatively under-served on a non-stop basis. Japan and Australia are each also among Thai’s larger markets, accounting for about 14% and 7% of its total international seat capacity respectively. 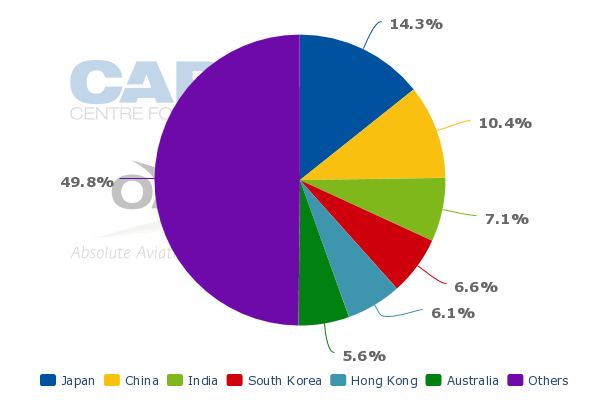 As Japan and Australia also are among the largest source markets for Thailand’s tourism sector, Thai Airways needs to push destinations beyond Thailand to offset the drop in local traffic. But any increase in transit traffic comes at the expense of yield, which was already down 3% in 2013. Country pairs such as Japan-Australia have become extremely competitive as several Asian carriers cope with overcapacity in their home markets.

For example, AirAsia X and Malaysia Airlines have also both been pushing Japan-Australia connections in a bid to fill additional seats on Australian routes. Capacity between Australia and Malaysia is up about 50% year over year.

Japan is a particularly critical market for Thai Airways as it is the carrier’s largest and generally most profitable destination. Thai Airways is looking to cement its leading position in the Japan-Thailand market, where it currently accounts for about 60% of total capacity, through the launch of new long-haul low-cost carrier NokScoot and capacity expansion under the full-service Thai Airways brand. While Thai Airways capacity will be flat in 2014, there will be opportunities for expansion in some markets in 2H2014 – with Japan and China being the main targets – to offset the approximately 3% reduction in ASKs for 1H2014.

As CAPA reported in the first part of this series of analysis reports on the outlook for Thai carriers, Bangkok-Tokyo Narita will be the launch route for NokScoot when it launches operations in 4Q2014. Thai Airways will have an indirect 20% stake in NokScoot and sees the new carrier as an important tool for countering competition from another long-haul low-cost start-up, Thai AirAsia X, while stimulating demand in the Thailand-North Asia market without impacting its full-service operation as NokScoot is aimed at a different segment of the market.

NokScoot completes a brand matrix which also includes Nok Air operating in the short-haul LCC sector and Thai Smile as a full-service regional subsidiary. Thai Airways owns 100% of Thai Smile and about 40% of Nok, which in turn will own about 49% of NokScoot with a 49% share also held by Singapore Airlines subsidiary Scoot and about 2% being set aside for NokScoot’s yet to be appointed management team.

Nok Air plans rapid capacity growth in 2014 as it look to cement its leading position in Thailand’s domestic market as well as pursue modest international expansion.

Nok is entirely a domestic operator with the exception of three routes to Myanmar which it launched in 2013.

Thai Smile is also continuing to expand rapidly, having added six aircraft in 2013 with another seven slated for 2014 for a total of 17 A320s. CAPA analysed the plans and outlook for Thai Smile in the second instalment in this series of reports. The focus for Thai Smile in 2014 will be to take over more Thai Airways routes as the mainline fleet shrinks.

While Thai Smile in 2013 launched several international routes in 2014 which previously were not operated by Thai Airways, most of these have been suspended and the regional subsidiary will not be used in 2014 to grow the Thai Airways Group network. Mr Chokchai says the group does not intend to add any destinations in 2014.

Thai Airways currently serves 64 international and 11 domestic destinations, according to OAG data. This includes both Thai Airways and Thai Smile as Thai Smile for now also operates under the TG code. (Thai Smile is expected to start operating under its own WE code within the next month as it secures its own AOC.)

While Thai’s overall ASKs will be flat in 2014 at about 86 billion, Thai mainline ASKs will decrease by a couple of percentage points; meanwhile Thai Smile increases significantly from a small base.

Thai Smile will soon operate under a separate AOC and code, but the group sees both carriers as essentially one from a network planning perspective. The decrease in mainline capacity will mostly come on routes which are handed over to Thai Smile as neither brand plans to add any new destinations in 2014.

Note: Firm orders include those placed directly by the operator and by lessors assigned to the operator
Source: CAPA Fleet Database 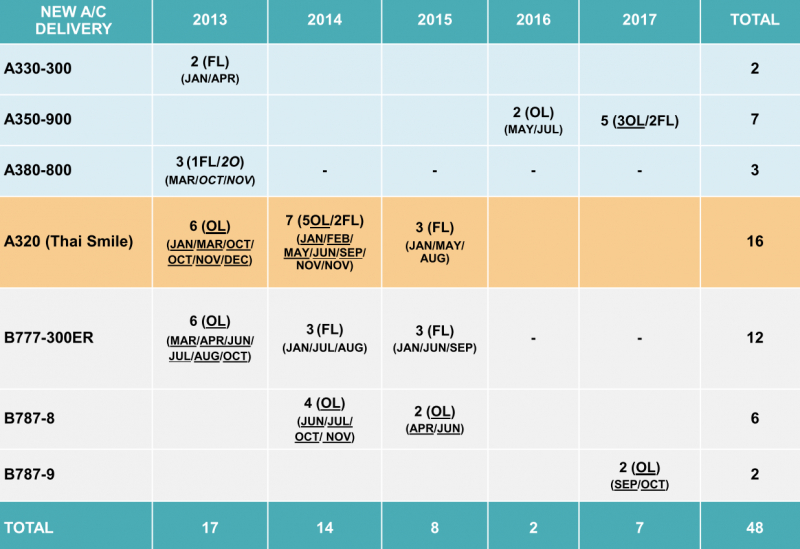 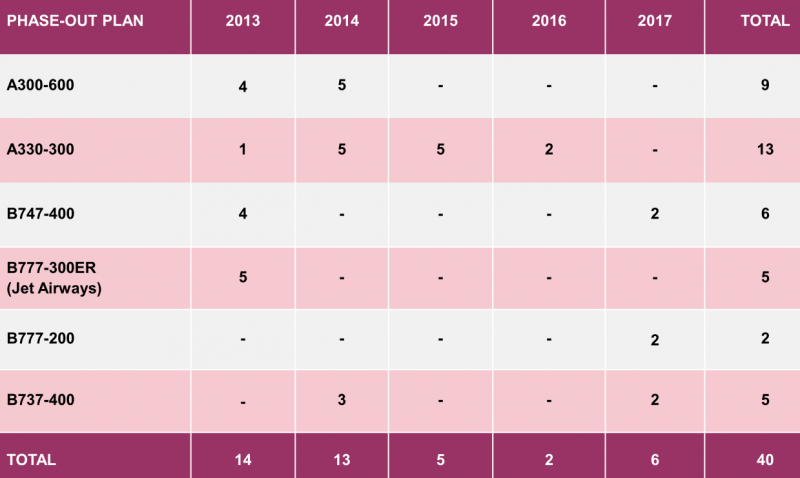 The Philippines and China are expected to be first markets to see the Thai Airways 787. The carrier has committed to six 787-8s, with the final two being delivered in 2015.

In addition Thai Airways has committed to seven A350-900s for delivery in 2016 and 2017. Mr Chokchai says the carrier is planning to use its A350s on a mix of regional and long-haul routes. It has opted for crew rest areas for all seven aircraft to give the carrier the flexibility to rotate all its A350s on European routes. The type will most likely be used to take over 777-200ERs on thinner European routes.

Mr Chokchai says the two additional 777-300ERs being delivered in 3Q2014 will also be used on routes to continental Europe. The carrier is now mainly using the 777-300ER on Scandinavia routes, including Copenhagen, Oslo and Stockholm. It currently operates nine 777-300ERs, seven of which it took in 2013 according to the CAPA Fleet Database.

Mr Chokchai says Thai Airways plans to continue using the A340-600 on its two daily London flights as the type has the highest concentration of premium seats among the carrier’s widebody aircraft. Thai Airways sees good premium demand out of London while economy demand is rather weak, particularly during certain periods of the year.

Thai Airways does not plan to phase out its fleet of six A340-600s until next decade and is preparing to retrofit the economy class cabin in 2017 as the current seats, which were manufactured by Koito, must be replaced.

The carrier has been studying potential 747-400 replacements. The 777X is the preferred solution but as the 777X is not expected to enter service until early next decade Thai Airways is also now looking at bridge solutions, including additional leased 777-300ERs.

Thai Airways has a need to place new aircraft orders, including for the 777X and A320neo as well as more 787s, but is currently unable to proceed with any acquisitions because of the current political situation.

Thai Airways requires government approval for new aircraft acquisitions and essentially needs to wait for the current political situation to be resolved before making any recommendations. The appointment of a new CEO is also not likely until there is political stability.

Thai Airways faces challenges, at a critical juncture in its development

The next 12 months could be critical for Thai Airways as it works to recover from the current drop in passenger traffic and sees yet another change in its executive team. Elements of a viable long-term business plan, centred on a multi-brand strategy that is similar to other leading airline groups in Asia, are in place. But the strategy will need some fine-tuning and several hurdles need to be overcome for it to be successfully implemented.

Market conditions remain difficult. Projections of a recovery in 2H2014 and return to profits for the full year are likely to be over-optimistic. As competition continues to intensify in its home market, with existing LCCs expanding rapidly and new LCCs entering, market conditions will probably only become even tougher.

Against such a backdrop the Thai Airways short-term outlook remains relatively bleak, particularly so long as uncertainty remains about the national political situation and the airline's leadership is still unresolved.

Any significant improvement over the next year will hinge on political stability returning to Thailand, the appointment of a capable CEO and the successful implementation of its multi-brand strategy. That and the hope that LCC pressures will not become too intense.