The fall in stock prices came as the US Department of Transportation reported a 5.5% year-on-year decline in full-time employees at US carriers during Sep-2009, to 563,391.

TAM (-6.2%) stocks saw the biggest losses on Thursday, after reporting a smaller than expected profit for 3Q2009. The carrier reported a profit of USD201 million for the quarter, due to an improvement in the Brazilian Real, rising 10% against the US Dollar during the period, which assisted in cutting costs. The result was compared to a net loss of USD382.5 million in 3Q2008. Operating costs decreased 14% year-on-year, while operating revenue declined 16.5%, to USD1.4 billion. TAM also reported a 25.2% fall in yield during the quarter.

Credit Suisse commented that although it was expecting a low operating margin from the carrier, the results highlight its higher costs compared to competitors, which could effect TAM’s stock prices.

Meanwhile, the carrier stated during trading it plans to increase domestic fares by approximately 10% from the start of 2010.

Air Canada (+2.4%) was the only carrier with stocks up at the end of trading. The carrier announced during trading it has commenced offering customers a Preferred Seat option allowing travellers to reserve specific exit row and bulkhead seats with extra seat pitch in the economy cabin on all Air Canada services. This week, part owner ACE also announced a prolongation of the repayment period for its loan to the carrier. 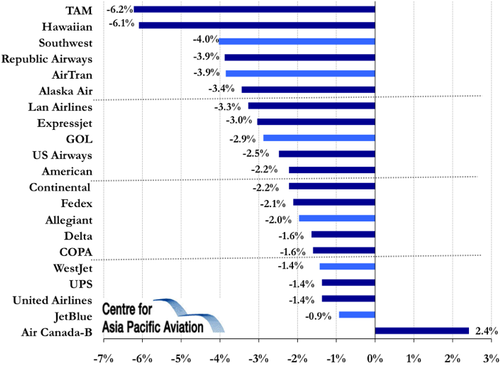