The majority of North and South American carriers’ stocks were down on Friday (29-Jan-2010), moving with the wider market. The Dow (-0.5%) ended trading down, despite early gains on stronger than expected economic growth in the US in 4Q2009, growing at its fastest pace in over six years.

LAN (+3.9%) was one of the few stocks to rise on Friday, making its largest gain in eight months following speculation fellow Brazilian carrier TAM (-5.9%) plans to purchase a USD2 billion or 19% stake in LAN from President-elect, Sebastian Pinera. TAM reportedly plans to use proceeds from its IPO of frequent flyer programme, Multiplus SA. TAM has neither denied or confirmed the report.

US Airways CEO calls for consolidation among “hub-and-spoke” carriers

US Airways (+3.3%) CEO, Doug Parker, meanwhile stated during trading that US carriers remain "intensely vulnerable" to the economy, fuel prices and competition, and that as a result, the US airline industry needs to consolidate in order to survive future issues, particularly with the country’s five legacy airlines. However, Mr Parker added the industry is currently in the “best position it’s been in in a long time”.

The carrier continued to benefit during trading from Standard & Poor's Equity Research upgrade of the carrier’s stock from ‘Hold’ to ‘Buy’ the day prior.

JetBlue (-3.3%) meanwhile fell on expectations of large check-in delays over the weekend, as it carried out the transition from the Navitaire system to the Sabre platform over the weekend. The LCC announced on 31-Jan-2010 that it had completed the transition and there were no reports of significant delays or interruptions.

Fellow LCC, AirTran (-5.9%) meanwhile made the biggest fall during trading. 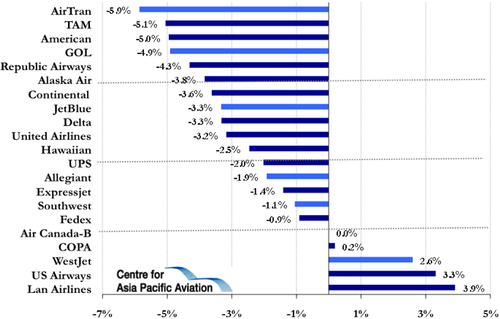