North and South American carriers’ stocks soared on Wednesday (14-Apr-2010), boosted by continued talk of a merger between United Airlines and US Airways or Continental Airlines and gains in the wider market. The Dow (+0.9%) was up on strong earnings results from Intel, JPMorgan Chase & Co and CSX Corp. Sentiment was also boosted by a 1.6% rise in retail sales for Mar-2010.

TAM (+2.9%) gained after the carrier reported improved traffic results for Mar-2010. Domestically, the carrier reported a 3.8 ppts year-on-year improvement in load factor, to 63.0%. The improvement was the result of an 11.8% rise in passenger traffic (RPKs) and a 4.9% increase in capacity (ASKs). However, domestic market share fell 7.6 ppts, to 41.8%.

Capacity growth in the quarter comes from a "rational" increase in the number of aircraft of about 3%, according to the airline, and an improvement in utilisation of 20-30 minutes per aircraft per day.

The carrier stated domestic yield should remain fairly stable in relation to the previous quarter and about 10% to 15% lower than 1Q2009, recalling that 2009 was an a typical year where the first quarter was the strongest of the year. The year-on-year reduction in yield was partially offset by increased load factors.

Internationally, the carrier reported a 4.7 ppts rise in load factor, to 70.9%, as passenger traffic rose 8.8% and capacity increased 1.6%. Market share was down 1.5 ppts, to 85.3%. TAM stated this growth was due to a combination of global economic recovery and the "full maturity" of its international routes.

International yield, in US dollar terms, in 4Q2009 showed an increase of 2% compared to 3Q2009, and "continued a sequential recovery in 1Q2010". For the latest quarter, TAM expects an increase of around 5% over the previous quarter.

Also during Mar-2010, TAM Cargo, reached a new sales record, rising 4.4% above the previous record set in Oct-2008. The domestic segment was strongest.

LAN Airlines (+0.1%) was up marginally. During trading, the carrier announced plans to launch Santiago-Paris service in Sep-2010. 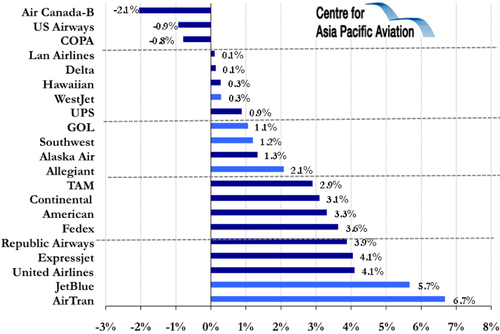