TAM and GOL up; US carriers more optimistic on return in business demand

The majority of North and South American carriers’ stocks fell on Friday (23-Oct-2009), following the first week of 3Q2009 result announcements. As a result, the AMEX Airline Index fell 1.7%, reflecting a fall in the Dow, down 1.1% at the end of trading. The fall came as oil prices slipped (-0.9%) to USD80.50 per barrel in New York.

US carriers optimistic of improvements in Business demand

The five largest US domestic carriers all reported losses for 3Q2009, but stated they were optimistic of signs Business travel demand is starting to rebound. According to analysts at UBS, there is some evidence of improvements in premium demand.

As a result of a more positive outlook on the horizon, carriers have been starting to increase their fares, with the majority of US carriers last week increasing their domestic return fares by USD10. The increase in fares is the fifth this year.

Meanwhile, Air Canada (-0.7%) stocks slipped following news the carrier reportedly plans to reprice its CAD260 million (USD247.4 million) stock issue, following a lack of interest from investors. Shares will be repriced at CAD1.56 each, down from an expected CAD1.62. The carrier currently has 100 million shares outstanding.

TAM and GOL up with Bovespa

TAM and GOL were two of only four carriers to see an improvement in stocks on Friday, on the back of reports that Brazil’s unemployment rate declined in Sep-2009. Unemployment was at 7.7% for the month, the lowest rate of the year, returning to levels before the global financial downturn. 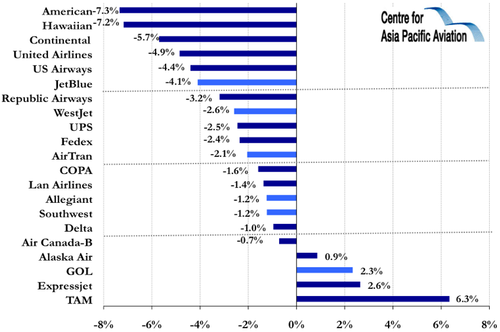