Shares in TAM and GOL rose 2.2% and 2.3%, respectively, shrugging off a 1.06% fall in the Brazilian Bovespa index yesterday.

LAN Airlines is reportedly aiming to reduce fares on the Santiago-Sao Paulo sector as part of its push to gain regulatory approval for its acquisition of TAM, according to a Reuters report.

COPA fell 1.2%, while in the US, American Airlines rose 1.3% and US Airways gained 1.2%. According to a Bloomberg report, the six largest US carriers have amassed USD23.8 billion in cash to reduce debt levels and build a cushion against future demand shocks, citing research by Fitch Ratings and Standard & Poor’s. 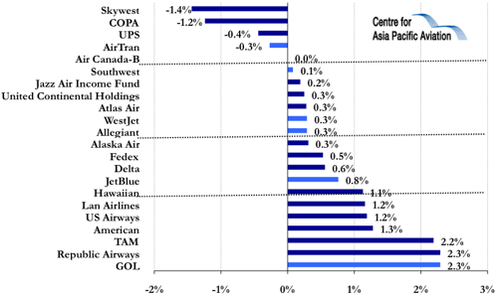