TAM (-3.3%) and GOL (-2.5%) slumped on Wednesday (22-Dec-2010) leading the decline in North and South American airline stocks for the day. The Brazilian carriers were down after the country’s pilots, flight attendants and ground personnel announced plans to strike on 23-Dec-2010.

The staff are seeking a salary increase of at least 13%, after representatives from their respective carriers only offered a 6.58% pay increase. The Brazilian Defence Ministry is reportedly preparing measures to avoid a strike by going through local courts and fining employees in case of a strike.

The decline was despite a rise in the Bovespa (+0.4%) late in trading.

American Airlines (-1.2%) also declined for the day. The carrier announced during trading it has requested US regulators for permission to delay the launch of New York JFK-Tokyo Haneda service from 31-Jan-2010 to 01-Mar-2011 to avoid the traditionally slow February travel period. The carrier stated the delay would enable the carrier to avoid "start-up in the depths of the off-peak season". The carrier stated Feb-2010 is notably the slowest month for travel between continental US and Tokyo with 25% fewer bookings than in Mar-2011. The carrier continued that an extension would allow American to “benefit from this important seasonal upswing in Tokyo traffic”. 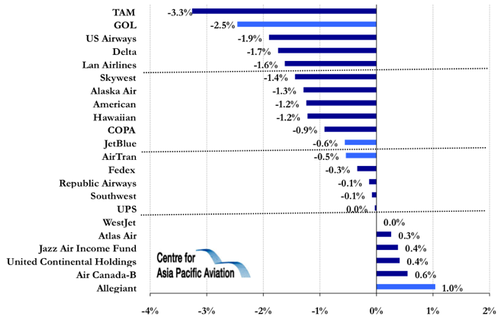