In just over a year Taiwan's LCCs – Tigerair Taiwan and V Air – have carved a 10% share of the Taiwan-Japan market. More Taiwanese visit Japan than any other market while Taiwan is Japan's third largest outbound market after Korea and mainland China. Taiwanese have affinity for Japan and share some culture, and additionally a Nov-2011 open skies agreement has unlocked growth. Summer 2016 seat numbers are 143% higher than five years earlier in summer 2011. Summer 2016 is 26% up from 2015.

Six years ago there were no LCCs in the market. Now, LCCs make up 26% of the total market and have a higher share on specific routes: 30% between Osaka and Taipei, 43% between Tokyo and Kaohsiung. Taiwanese LCCs account for 35% of the LCC market – double their share at the start of 2016.

Lower costs in Taiwan and a home market advantage give Taiwanese LCCs a strong growth outlook in Japan. Yet elsewhere they are struggling to find new markets. Japan accounts for 57% of Tigerair Taiwan and V Air's seat capacity. Korea and Hong Kong are bilaterally constrained, while Southeast Asia has not been as popular a market. Taiwan's LCCs made quick wins in the underserved Japanese market but now have work ahead of them to build awareness of new markets.

Sapporo's only LCC service so far will be from Sep-2016 and operated by Scoot, with fifth freedom rights. 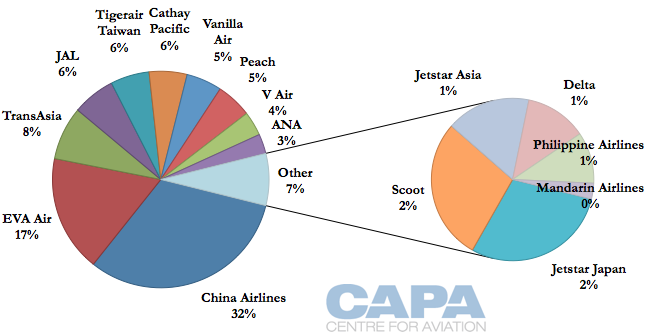 Approximately 26% of Taiwan-Japan seat capacity in Jul-2016 will be operated by LCCs.

This is no small achievement considering that the market's first LCC flights were in 2010. Singapore-based Jetstar Asia was the first LCC to operate services between Taiwan and Japan with its Singapore-Taipei-Osaka Kansai service launching in Jul-2010. Scoot launched services on the Singapore-Taipei-Tokyo Narita route in Sep-2012 while the first Japanese LCC, Peach, entered the market in Oct-2012 with Taipei-Osaka Kansai service. Taiwanese LCCs began serving Japan in 2015, shortly after their 2014 launch.

The remaining 3% of LCC capacity is operated by foreign airlines (Singaporean: Jetstar Asia and Scoot). 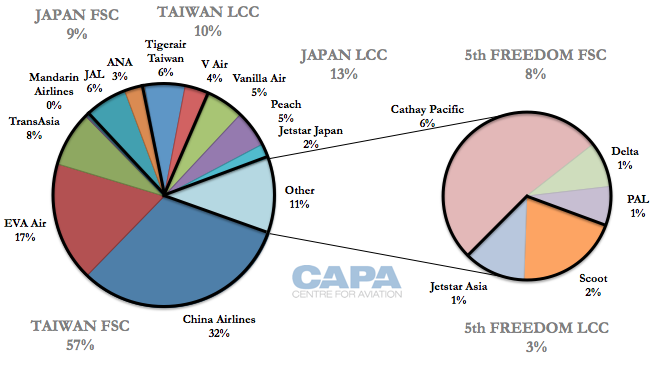 Taiwanese LCCs have an advantage over Japanese LCCs 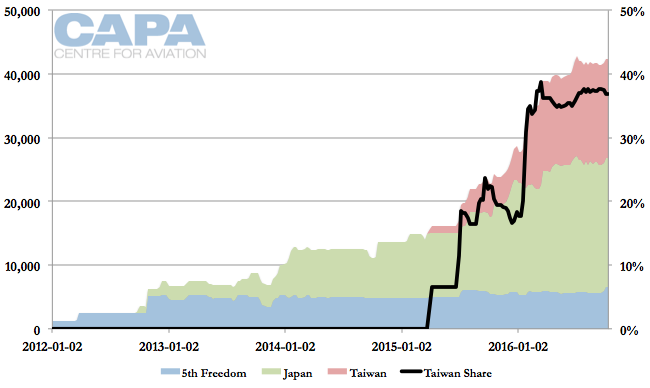 Taiwanese LCCs have a theoretical strategic advantage over Japanese LCCs, for a few reasons.

A Taiwanese airline can easily fly from a single Taiwanese city (Taipei) and capture most of the local market. But a Japanese airline would need to serve Tokyo and Osaka to have a similar catchment size.

Plus, with a single base at Taipei, Taiwanese LCCs can serve smaller Japanese cities. For a Japanese airline to fly from a smaller city it would have to base an aircraft there, or have a complex routing. Peach is scheduling multi-sector legs for an aircraft in order to utilise Tokyo Haneda's restricted night hour slots. But Tokyo Haneda is a significant market, and Japanese LCCs may not be so willing to introduce operational complexity for smaller, lower-yielding Japanese cities.

These advantages do not automatically confer market share. Japanese LCCs are more numerous (four in service with a fifth, AirAsia Japan, due to launch). They also tend to have a clear strategic purpose and are mostly distanced from their affiliated full service airline.

With Taiwan's LCCs, it still has to be seen how Tigerair Taiwan's majority owner, China Airlines, wants to use Tigerair Taiwan in the long term and if there is a strong growth commitment. Tigerair Taiwan may also need to be independent of the Singapore-based Tigerair brand and functions (website, bookings) should Tigerair be consolidated with Scoot. (This matter also applies to Tigerair Australia.)

V Air is half the size in Japan as its full service parent TransAsia. TransAsia had a distant vision to become an intercontinental airline (it operates A330s but deploys only regionally) but the strategic direction was uncertain and the airline has suffered in its reputation and regulatory standing after two fatal crashes. TransAsia may need to develop an intercontinental network or shift to a low cost platform; it is virtually unique in Asia for being full service regional without intercontinental links (also in this category is Bangkok Airways, although it has long-running success and strategic nuances that make it different from TransAsia).

The 26% LCC penetration rate is for the Taiwan-Japan market on the whole. Route-by-route performance is stronger. In Jul-2016 10 routes account for 91% of seat capacity between Japan and Taiwan. LCCs have a presence on eight of these 10 routes.

The two exceptions are Tokyo Haneda to Taipei Songshan (there are no Taiwanese LCC operations at Songshan, but there are LCC flights at Haneda) and then Taipei Taoyuan to Sapporo. Taipei Taoyuan-Sapporo will have LCC service from Sep-2016 but on the Singaporean LCC Scoot, which will have fifth freedom rights.

This perhaps suggests that Taiwanese LCCs have overlooked Sapporo. (There are no international Japanese LCC flights at Sapporo.) Taipei-Sapporo is around the edge of the operating envelope of the A320, which both Tigerair Taiwan and V Air use. Some flights, especially in winter when winds are stronger, could face operational restrictions.

Of the eight routes (in the top 10) that LCCs serve, penetration is generally 30% or more. Only one route (Fukuoka-Taipei Taoyuan) has an LCC penetration rate (22%) below average. The total Japan-Taiwan LCC penetration rate is impacted by LCCs not being as prolific in destinations served, and still being young. Where LCCs do fly, they have grown the market and won market share. 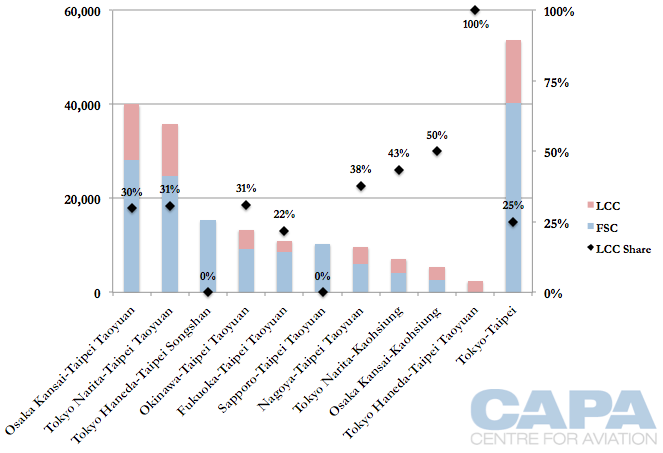 On the two largest routes, from Taipei Taoyuan to Osaka Kansai and Tokyo Narita, LCCs account for approximately 30% seat capacity. In the total Tokyo-Taipei city market, encompassing all airport combinations, LCCs account for 25% of capacity. LCCs have done well on trunk routes and it is still early days.

Looking at smaller routes, their capacity share is higher and grows: the 7th, 8th and 9th largest markets have LCC penetration rates of 38%, 43% and 50%. These figures inevitably drop off on markets where LCCs are not present, but they indicate the potential.

So far LCCs have only opened one new destination, Ibaraki. With Taiwan already linked to 21 Japanese cities, destinations that can be added are naturally limited. But there are certainly opportunities as Japanese airports make plans to attract more services. Next-generation narrowbody aircraft with improved range could open up deeper points in Hokkaido.

Finally, as dual brand strategies are formalised and implemented, thinner routes could be transferred from the full service to low cost arms. These thinner routes likely have stronger financial incentives available for airlines that grow the market.

Japan will account for approximately 57% of seat capacity at both Tigerair Taiwan and V Air. This is a significant exposure to a single market. 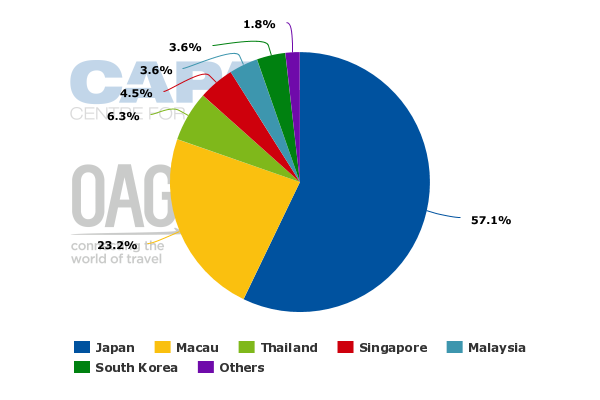 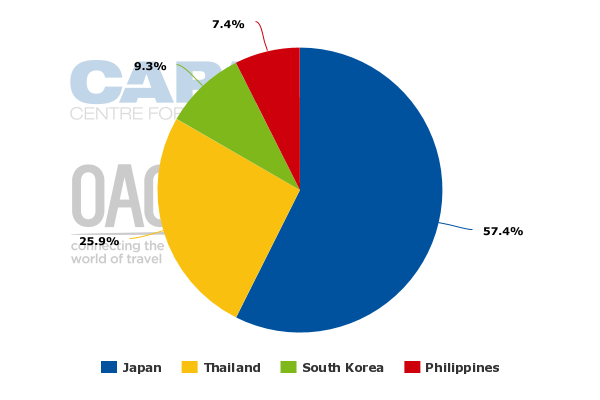 Opportunities are not as bountiful as they may seem. In Northeast Asia, the Taiwan-Korea bilateral is heavily restricted for Seoul. A recent expansion was piecemeal. Jeju airport is slot restrained, largely leaving Busan available for service. The Hong Kong bilateral is also restricted. China Airlines has spoken of possibly deploying Tigerair Taiwan on the Taipei-Hong Kong trunk route if the bilateral permitted. Mainland Chinese airports can broadly be grouped as destinations that would make good markets but have significant slot restraints, or are too low-yielding.

In fact, it was the Southeast Asian LCC presence in Taiwan that caused Taiwan to urge its local aviation sector to introduce LCCs. Some of the LCCs offer connections to smaller points in the region while foreign full service airlines (such as Cathay Pacific) have long used Taiwan as a source market.

Further, Southeast Asia has not been as popular a destination. Bangkok is slightly further from Taipei than Tokyo but significantly cheaper. In 2015 Taiwan's three largest outbound markets (Japan, mainland China and Hong Kong) represented 70% of Taiwanese departures. Thailand was the only significant Southeast Asian market, accounting for 5% of departures. There were 16% more departures to the US than nearby Vietnam. There were almost as many outbound departures to the US as to Singapore and Malaysia combined. 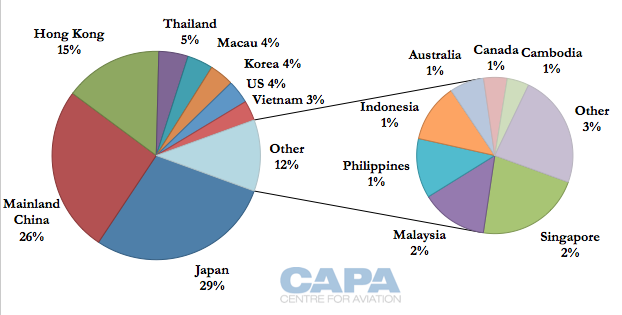 Japan continues to hold considerable opportunity. Further growth is possible as smaller Japanese airports enhance incentive programmes. But elsewhere there are no easy wins. Significant opportunities, like Korea and Hong Kong, are bilaterally restricted, with no breakthrough in sight. Mainland China, and some other markets, could require a defined dual brand strategy.

Some Southeast Asian destinations would require the LCCs to build awareness of destinations. European LCCs have done this well, creating entire tourism economies in once-sleepy parts of the continent. But Northeast Asian airlines have generally been spoilt by having pent-up demand. The name "Tokyo" sells itself with no explanation needed.

Nearby LCC HK Express has achieved many quick wins in underserved markets (also relying heavily on Japan as well as Korea, which is not bilaterally constrained). But new points in Vietnam, Myanmar and the Pacific Ocean (Guam, Saipan) are requiring destination building to create awareness.

The Northeast Asian LCC experience is sharply different from that of Southeast Asia or other continents. Lessons can be learned, but the region is far from being able to receive a copy and paste version of an LCC from another region. Bilaterals, slots and dual brand strategies are shaping the LCC experience more so than in other markets.

Seismic change is difficult with these matters, but they do not diminish the bright long term opportunity.