Sydney Airport will narrow its competitive disadvantage of having separate domestic and international terminals with a plan to split its terminals by 2019 into two alliance-based precincts: one for Qantas and its partners and one for Virgin Australia and its partners. The two groupings will account for 81% of all movements. Leftover international carriers will in most cases use the Virgin terminal while a plan is underway to address leftover domestic and regional airlines, notably Tiger Airways and Regional Express. While the plan may placate the two big airline groupings in Australia, Sydney airport may face a shortfall of placement options for new carriers looking to offer their passengers onward domestic connections.

Sydney airport expects to formally begin stakeholder consulting with the aim of including the proposal in its 2014 master plan, which will be drafted in late 2013. Qantas and Virgin Australia, Sydney's two largest occupants based on movements and seats, have already given their support with the signing of a non-binding memorandum of understanding. The proposal will critically increase gates but not change slot restrictions, the airport's curfew or noise regulations.

Sydney's largest competitor, Melbourne Tullamarine, has long trumpeted its co-located terminals, lack of curfew and its public-private marketing effort with local government and tourism bodies to offer incentives to airlines selecting Melbourne. Sydney last week closed the gap on the public-private marketing effort with a formation of its own promotion group. In an early victory, Sydney was named the first destination for Singapore Airlines' low-cost long-haul carrier Scoot.

The precinct plan will benefit most Qantas and Virgin Australia and their respective partners as they collectively represent 81% of all movements at Sydney. Of the remaining movements, the majority are from regional carriers Regional Express (Rex with 11%) and Aeropelican (2%).

Others airports, notably London Heathrow and Tokyo Narita, divide terminal placement by alliances. Perth in Western Australia plans to adopt a co-located terminal strategy over the next decade while Melbourne Tullamarine is evaluating entirely new terminals for further expansion. 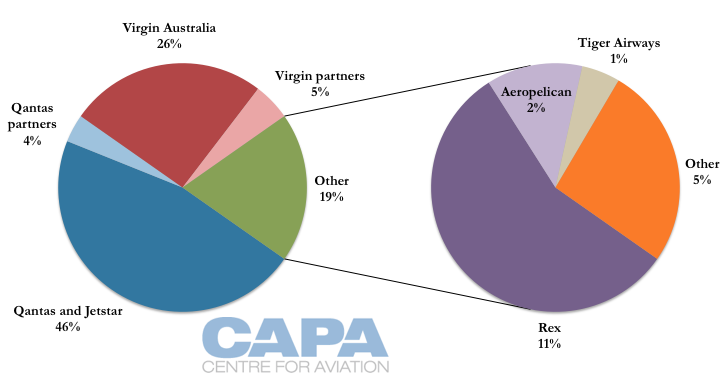 Addendum: Sydney airport has clarified earlier marketing material to say that since it will take over the leases on all terminals, the airport will effectively become common user. Sydney airport will be able to place non-Qantas or Virgin aligned carriers into the precincts, and some such carriers may operate out of the Qantas precinct.

Also at the current domestic terminals are Tiger Airways and regional carriers Rex and Aeropelican. Sydney airport has not yet confirmed its intention for this grouping of carriers (representing 14% of movements) except to say they will be accommodated elsewhere.

"As passenger numbers grow over the next decade, it is vital that airlines and airports work closely together to deliver a seamless travel experience," Qantas CEO Alan Joyce said in a statement. His counterpart at Virgin Australia, John Borghetti, emphasised his carrier's virtual network, which has expanded greatly under his leadership with agreements from Etihad and Singapore Airlines. The virtual network facilitated the scale needed for a second precinct, rather than having a Qantas precinct and a second precinct for all other carriers.  "We look forward to working with all stakeholders to explore its merits in detail, in particular how it supports the growth of Virgin Australia and its alliance partners," Mr Borghetti said in a statement.

This move could make it easier for Virgin Australia to partner with new carriers, although Mr Borghetti in Aug-2011 flagged Virgin's major partnerships were completed and any future partnerships would involve "niche" carriers.

Virgin Australia is looking to harmonise the product on its A330 fleet so the aircraft can be interchanged between domestic trunk routes and international flights, but the number of such A330 transfers at Sydney would be small.

Sydney has not yet put a cost on the project, but says it would be in line with previous projections of other terminal works, which it estimated at AUD2.5 billion (USD2.6 billion) from 2010-2029. Sydney is majority owned by MAp (formerly Macquarie Airports) while Melbourne Tullamarine is owned by Asia Pacific Airports Corporation. 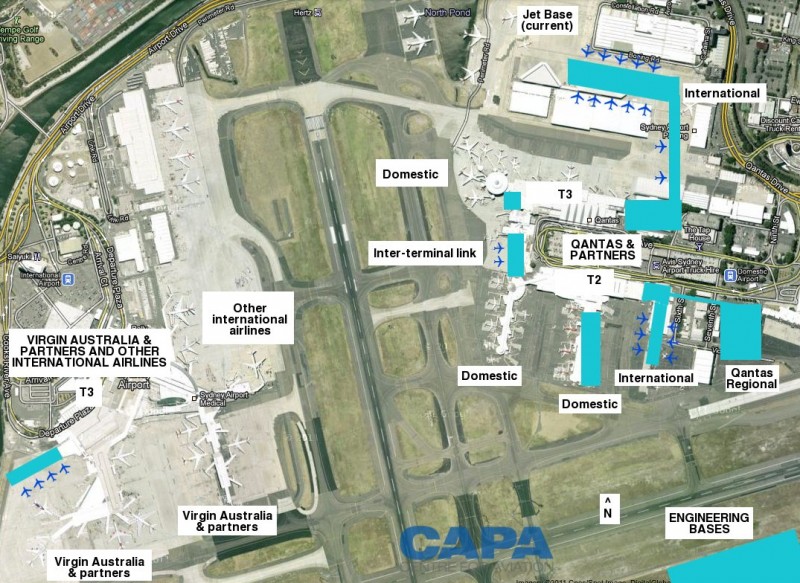 Most infrastructure changes at Qantas precinct

The most intensive passenger infrastructure changes, as well as addition of gates, will occur at the Qantas precinct, which will be the larger of the two. (Virgin has said it does not want or plan to become bigger than Qantas.) An inter-terminal link (at least one, so far) will connect terminals two and three on the westward end. Sydney airport envisions leaving the existing terminal two and three piers as domestic piers. The airport would construct two new piers capable of handling international flights with their requisite security protocols and immigration, customs and quarantine facilities.

The northern pier, accommodating international flights, would branch out from the existing terminal three and occupy much of the Qantas Jet Base, Qantas' maintenance facilities at Sydney. The Qantas Jet Base is proposed to be moved south of the passenger terminals. Aircraft currently endure waits crossing an active runway to go from the international terminal to the Jet Base. Consolidating Qantas' international and domestic operations in one precinct will eliminate the wait, but moving the Jet Base south will require longer taxi times too. 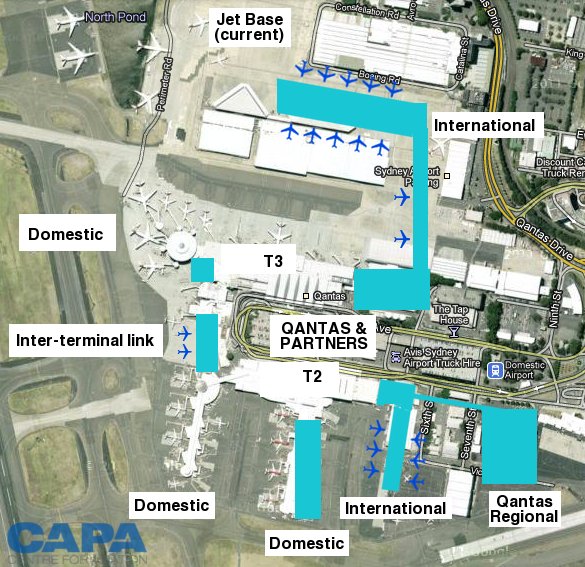 So far only minor infrastructure additions are envisioned for the current international terminal that will become the precinct for Virgin Australia and its partners as well as left over carriers. Marketing material from Sydney airport indicates a westward expansion of a pier to accommodate four parking bays for small aircraft, such as the B737s and ATRs Virgin uses.

While the leftover carriers make for an eclectic bunch, they are predominately in Star Alliance. If Virgin by 2019 decides to no longer be unaligned and join Star, the precinct would be more of a Star Alliance terminal.

Sydney airport will need to manage how the existing international terminal can accommodate domestic flights en masse. While there are already limited domestic flights, primarily from Jetstar, passengers are subjected to the more rigorous international security screening, have to travel with passports to confirm their identity, and have to weave their way through the outbound and inbound immigration and customs. This adds significant time compared to the relaxed procedures currently in place at domestic terminals that allow passengers to go from check-in to their gate in a matter of minutes. An onerous airport experience would be a competitive disadvantage.

Marketing material from Sydney airports envisions a mixed domestic and international terminal rather than segregating certain piers, unlike at the Qantas precinct. Sydney plans to make the existing domestic terminals the domestic area for Qantas and Jetstar and supplement it with isolated international piers, making Virgin more exposed to having a complex environment for its domestic passengers.

Preliminary changes to Sydney terminal one to make a Virgin Australia, partner and other international carrier precinct 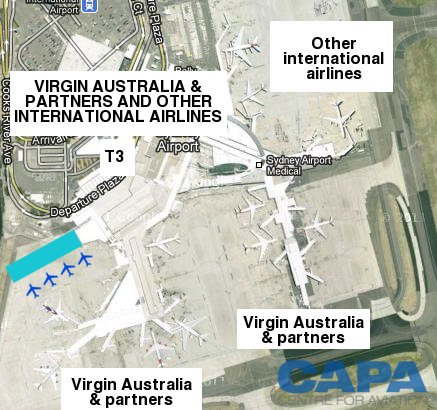 Sydney airport proposes the mostly empty land currently south of runway 07/25 become a maintenance for Virgin Australia and Qantas. Virgin in Feb-2011 announced its intention to open around late 2012 its first hangar at Sydney airport, proposed to be located in the northeast corner but now subject to review. The hangar would accommodate up to four narrowbody aircraft or two widebody aircraft and one narrowbody aircraft. 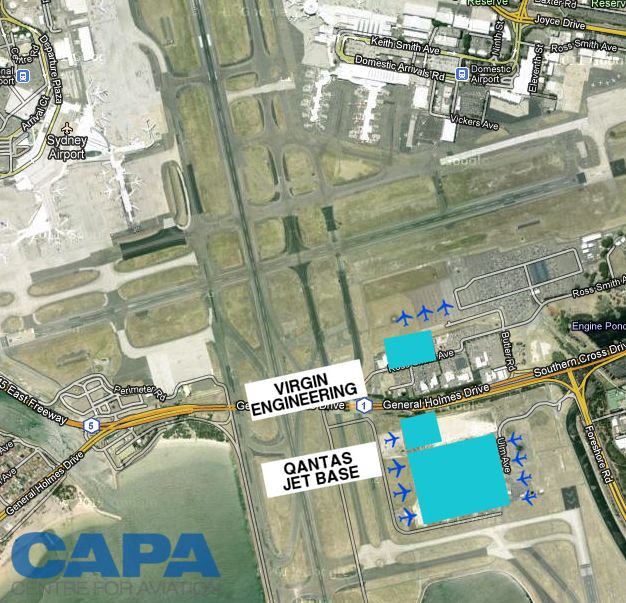 Qantas leases its current domestic terminal and Jet Base sites. The domestic terminal lease expires in 2019 and the Qantas Jet Base in 2020. Qantas and Sydney airport have begun discussions about Qantas ending the leases earlier to accommodate the plan. "We have entered into a non-binding MOU to explore the financial implications of the potential early reversion of leases, plus other commercial issues, as part of formal consultation on the proposal," a Qantas spokesman confirms to CAPA.

Last decade Qantas explored selling its domestic terminals but backed down when it did not think it would garner enough financial interest at levels it wanted to sell its terminals for. Selling the terminals and then renting the space would shield Qantas from paying rent if it reduced flights during economic downturns.

Critically, this plan will allow Qantas to exit its agreements early and allow Sydney airport to create a layout suitable to its major tenants. Australia is the last remaining major country where carriers still own their own terminals.

While Sydney airport will greatly appease its two main tenants with its precinct plan, the outlook for driving new business and new airlines to the airport is still not solid. Sydney's largest competitor, Melbourne Tullamarine, has all of its terminals co-located, allowing passengers to connect between international flights and their domestic carrier of choice. At Sydney, however, independent carriers will be stuck at the Virgin Australia precinct with the namesake carrier the only domestic option. Passengers wanting to connect to Qantas, Jetstar or Tiger will have to plan ahead to switch terminals.

For independent carriers this is only a small improvement from the current situation of having to switch terminals if connecting at Sydney for an onward domestic flight. Presumably these future carriers will not be represented during consultations. Sydney says it plans to specifically target new carriers from Asia as well as LCCs.

Since Sydney has significant relatively modern infrastructure already at both precinct sites, it would be far more financially onerous to consolidate terminals to one precinct.