From 2009 to 2015 SWISS accounted for 47% of the operating profits produced by all the airlines in the Lufthansa Passenger Airline Group, and 29% for the Lufthansa Group overall. It has also consistently been the Group's most profitable airline in margin terms. In 2015 it even managed to post a higher margin than Lufthansa's MRO business – traditionally a much more robust and profitable activity than most airlines.

Nevertheless, SWISS seems now to be struggling to maintain these achievements. Its passenger load factor, while still the highest in the group, is on the decline. Revenue is falling and SWISS suffered a drop in margin in 1Q2016. The seasonally weak 1Q may not say too much about prospects for the full year, but Lufthansa expects SWISS to report a slightly lower adjusted EBIT in 2016 relative to 2015.

SWISS was fully consolidated into the Lufthansa Group's results in 2H2007, so that 2008 was its first full-year contribution to the group. Since then SWISS has been consistently profitable, the only airline to avoid losses in the Lufthansa Passenger Airline Group (this includes Lufthansa's own passenger operation, Germanwings/Eurowings, Austrian and SWISS and, in 2009 and 2010 – bmi).

In 2009, when the Lufthansa Passenger Airline Group made an operating loss of EUR8 million, SWISS achieved a EUR93 million profit and was the only full service airline in the group to be profitable (Germanwings made a profit of EUR24 million).

Lufthansa's own passenger business remains the largest, and most important, airline in this group and its profit recovery since the global financial crisis has been the main driver of profits for the Passenger Airline Group. Nevertheless, SWISS has made an important contribution over the years.

In 1Q2016, although SWISS remained profitable in what was a loss-making quarter for the Passenger Airline Group, the decline in its result (from EUR51 million in 1Q2015 to EUR23 million in 1Q2016) was in contrast with the performance of the other hub airlines, and with that of the group as a whole.

Lufthansa's own passenger business turned around a loss of EUR184 million in 1Q2015 to record a profit of EUR60 million in 1Q2016, and Austrian narrowed its loss from EUR53 million to EUR23 million.

Alongside SWISS, the only other airline in the group to suffer a fall in its result in 1Q2016 was LCC Eurowings, whose loss increased from EUR53 million to EUR86 million. 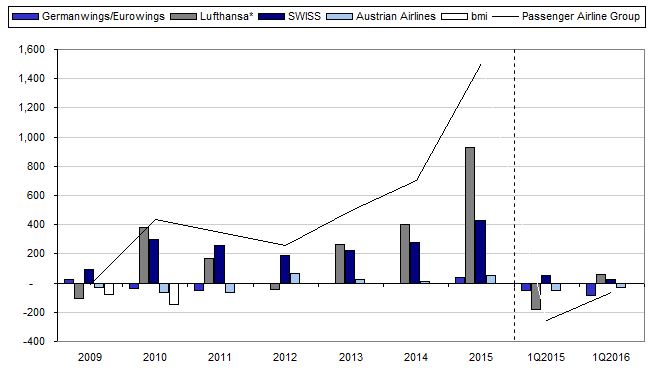 *Lufthansa Passenger Airline including Germanwings for 2012 to 2014
**Based on operating result to 2013 and adjusted EBIT from 2014 (EBIT before impairments, pension adjustment and asset disposal gains/losses)
Source: CAPA - Centre for Aviation analysis of data from Lufthansa Group annual reports and traffic figures and SWISS press releases

In terms of operating margin, or adjusted EBIT margin from 2014, SWISS has been Lufthansa's most profitable hub airline every year since 2009 and the most profitable of all its airlines since 2010 (Lufthansa did not disclose separate results for Germanwings/Eurowings for the period 2012 to 2014).

For most of this period SWISS has achieved margins of 5% or more, while the other airlines in the Lufthansa Passenger Airline Group only crossed this threshold in 2015.

However, SWISS' 1Q2016 fall in adjusted EBIT meant that its margin declined below that of Lufthansa's own passenger airline business for the quarter. In Lufthansa's accounts, which are stated in EUR and include group accounting adjustments, SWISS reported a margin of 2.3% in 1Q2016, compared with 4.8% in 1Q2015 (these figures are slightly different from the CHF numbers quoted above). Lufthansa's own passenger business improved its margin to 4.9% from -4.3% a year earlier.

As noted above, SWISS is expected to report a slightly lower adjusted EBIT in FY2016 compared with 2015, while Lufthansa's passenger business is expected to increase its result slightly.

If SWISS' revenue also continues to fall this year this does not necessarily mean that its margin will fall, although its 1Q performance suggests that it is a possibility. Nevertheless, given that SWISS' 2015 margin was 9.4% and Lufthansa's was 5.8% (adjusted to exclude Eurowings/Germanwings), this still leaves scope for SWISS to report the highest margin in the Passenger Airline Group in 2016. 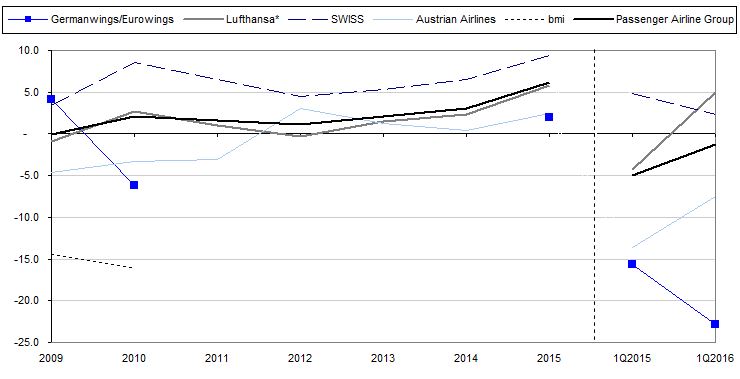 *Lufthansa Passenger Airline including Germanwings for 2012 to 2014
**Based on operating result to 2013 and adjusted EBIT from 2014 (EBIT before impairments, pension adjustment and asset disposal gains/losses), as a percentage of revenue
Source: CAPA - Centre for Aviation analysis of data from Lufthansa Group annual reports and traffic figures and SWISS press releases

SWISS' 2015 adjusted EBIT margin of 9.4% also made it the most profitable of all Lufthansa businesses last year. It overtook the MRO segment – which made an 8.9% margin – for only the second time. The MRO business has been the most consistent performer in the Group, but its business is much less exposed to the vagaries of the airline cycle.

MRO volumes may weaken in a downturn, but to a far lesser extent than for aircraft operators. Moreover, MRO pricing typically does not suffer as much as airline yields when there is a downturn.

For SWISS to have consistently had the best margin in the Passenger Airline Group and to be regularly close to the MRO segment's margins – even occasionally beating them – is a significant achievement.

In 1Q2016 MRO produced a margin of 6.7%, compared with the 2.3% of SWISS. Again, SWISS' 1Q20016 result may not say very much about its FY2016 prospects. In 1Q2015 SWISS' margin was 4.8%, versus MRO's 8.5%, but it went on to record a higher margin in FY2015. Nevertheless, its 1Q216 margin decline raises the possibility that it may not end 2016 as the Lufthansa Group's most profitable business (although the MRO segment is expected to report a significantly lower adjusted EBIT this year). 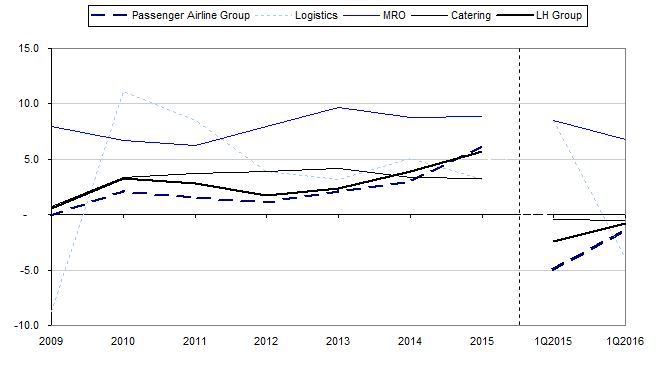 *Based on operating result to 2013 and adjusted EBIT from 2014 (EBIT before impairments, pension adjustment and asset disposal gains/losses), as a percentage of revenue
**excludes IT Services/other/consolidation adjustments
Source: CAPA - Centre for Aviation analysis of data from Lufthansa Group annual reports and traffic figures and SWISS press releases

SWISS' disproportionate contribution to Lufthansa Group profits is impressive. However, its share has been steadily falling in recent years. This is probably more due to other parts of the group recovering (and to the trajectory of the SFR) than SWISS declining. From 2009 to 2015 in aggregate SWISS generated 47% of the Passenger Airline Group's operating profit/adjusted EBIT and 29% of the total Lufthansa Group's operating profit/adjusted EBIT.

*Based on operating result to 2013 and adjusted EBIT from 2014 (EBIT before impairments, pension adjustment and asset disposal gains/losses
Source: CAPA - Centre for Aviation analysis of data from Lufthansa Group annual reports and traffic figures and SWISS press releases

Things changed in 2015. SWISS carried 16.3 million passengers (not including its subsidiary Edelweiss), an increase of 0.9% year-on-year and the third successive year of roughly 1% growth. Including Edelweiss, passenger numbers grew by 1.5% to 17.5 million in 2015.

However, in spite of traffic growth in 2015, SWISS' revenue reported in its home currency fell for the first time since the global financial crisis in 2009. In 2015 its revenue was CHF5,035 million, a decline of 3.5% year-on-year. SWISS attributed the decline to "still-high competitive pressures and the resulting yield declines".

The fall in revenue in 2015 was also the result of the jump in the value of CHF after Switzerland's central bank removed the peg between its currency and the EUR in Jan-2015, with the result that the average CHF/EUR exchange rate jumped by 13.8% in the year. Fares priced in EUR translated into a lower number in CHF, while fares priced in CHF and sold outside Switzerland became more expensive to international customers, placing downward pressure on fares.

Although revenue grew faster than passenger numbers from 2009 to 2014, it failed to match the 24.2% increase in available seat kilometres (ASKs) over this period. This partly reflects an increase in average trip length, but also a slowing of load factor growth.

In 1Q2016 ASKs grew by 2.3% and passenger load factor accelerated its decline, with a 3.1ppt fall to 75.8% (if Edelweiss is included, ASKs were up by 2.1% and load factor was lower by 2.9ppts to 75.9%). A falling load factor trend was experienced by all Lufthansa Group hub airlines, although SWISS continued to have the highest load factor in the group in 1Q2016 (but suffered the biggest decline).

In 2015 SWISS increased its adjusted EBIT by 34% to CHF453 million, in spite of the 3.5% drop in revenue noted above. The improved result owed much to lower fuel prices, although the Lufthansa Group's SCORE programme also had a positive impact. In EUR terms, SWISS' result increased by 54% to EUR429 million in 2015.

In 1Q2016 the adjusted EBIT fell by 57% to CHF22 million and the operating margin reported by SWISS more than halved to 2.1% (compared with 4.4% in 1Q2015). Although the seasonally weak 1Q is not generally a reliable indicator for the full year, the decline in profit is expected to continue this year. The Lufthansa Group expects SWISS to report a slightly lower adjusted EBIT in 2016 relative to 2015 (in EUR terms).

*Based on operating result to 2013 and adjusted EBIT from 2014 (EBIT before impairments, pension adjustment and asset disposal gains/losses)
Source: CAPA - Centre for Aviation, SWISS, Lufthansa

This is not the place to examine SWISS' outperformance over the period, but there are some features that distinguished the airline. First of all, the Lufthansa management tended to allow a good degree of autonomy to Zurich. This logically would be the case if the airline were performing well, as it was - if it works, don't fix it. But Group management is not always that enlightened or logical; here it seems, whether by design or omission, the logical course was followed and it worked.

Secondly, none of this sequence would have been possible without good management at SWISS, as well as the ability to cooperate effectively with Cologne, and here it was fortunate. It is hard to imagine that it was sheer coincidence that for almost all of this period Harry Hohmeister was CEO. It would appear his work at the Swiss carrier has now been rewarded with leadership in a newly created Hub Management role, responsible for all of the Group's premium brands, as Lufthansa undergoes a significant restructuring. Given the Group's growing hub complexity this will be no easy role; nor will his successor's role at SWISS, Thomas Klühr. It will be a hard act to follow.

In a May-2013 report on SWISS CAPA posed the question as to whether the star in the Lufthansa Group was starting to fade.

It was not then the case, but as a Dec-2015 CAPA report noted, SWISS cannot afford to be complacent. As its fleet programme demonstrates, it has no intention of being so. Certainly, to judge from Lufthansa Group's hiring plans announced in early 2016, SWISS' parent has confidence in its future.