Many governments, national, regional or local, have good intentions when it comes to the construction of airports. Theoretically, they will improve the economic prospects of a region.

But all too often they turn out to be white elephants unable to attract commercial airlines. Spain has some good examples.

In Sri Lanka the same appears to be happening, with the Indian Airports Authority reported to have been frozen out of a joint venture with the Sri Lankan government to develop the new Mattala airport. That is surprising, because politically it is in India’s interests to assist with developments like these and, at the same time, keep China out.

“At best a white elephant”

The new Mattala Rajapaksa International Airport (MRIA) in Sri Lanka has been described as “at best a white elephant with a very small catchment area”, and that “nobody flies there”.  And that was from SriLankan Airlines’ former CEO Suren Ratwatte.

At the time (2018) it seemed that the airport would be taken over by Airports Authority of India (AAI), and that the plan seemed to be for AAI to invest in the airport. Mr Ratwatte added that, in terms of some of the large China-supported infrastructure projects in Sri Lanka: “Who the infrastructure was supposed to cater to, I really don’t know”.

There is an intriguing tale behind the development of this airport, where, it is now reported, the government has suspended plans to establish a JV with AAI for its operation under a 40-year concession contract. The AAI was expected to hold a 70% stake in the joint venture formed to operate the airport. India’s Minister of State for Civil Aviation had at first denied AAI was considering any such JV proposal.

AAI was asked to submit a business plan, but the private sector also approached

MRIA was opened in Mar-2013 by President Mahinda Rajapaksa, who had ordered the construction of the airport.

In mid Jul-2018 Sri Lanka’s Government requested that AAI submit a business plan for the operation of the airport. AAI was expected to tackle issues that included how many flights it would bring in, and which Indian airlines in particular would service the airport – even though it has no control over those.

Intriguingly, it once appeared, when this procedure began, that the Sri Lankan government was seeking to do a deal with the Indian government directly rather than with AAI, which is an agency operating under the auspices of the Indian Ministry of Aviation.

All eventualities were on the table

And the situation was further confused by a statement made at the beginning of Jul-2018 by Sri Lanka’s Deputy Minister of Transport after the visit of a delegation from India, to the extent that the government did not plan to sell the airport “despite (it) making losses”.

So… a deal with the Indian government, with AAI as a JV partner, with a private Indian company, and no deal at all. All eventualities were on the table if reports are to be believed.

India wary of China’s growing influence in the region

India’s interest may have political drivers and could be based around China’s growing influence, having already supported the initial financing of the airport and already holding a presence at the nearby Hambantota shipping port (to access one of the world’s busiest shipping lanes) under a 99-year lease.

Obviously China’s intentions are unclear, but under its ‘One Belt, One Road’ (OBOR) initiative access to a port and airport would have given it increasing power in the subcontinent. As some commentators have pointed out, OBOR is primarily to influence control over the Asian ‘rim’, which runs around and through Sri Lanka.

The need for India to keep China at bay in this area has been heightened by worsening political relations between China and just about every other country on earth (except Iran) since the COVID-19 pandemic began (NATO is expected soon to come knocking on India’s door), and by border clashes between China and India during the past two months.

An Indian company was favoured by the Sri Lankan government to be the majority partner because India “can bring the largest volume of tourists to this airport”.

And Mattala Rajapaksa Airport needs those visitors. It was conceived as a second international airport for the country but is situated on the south coast, 120 km from Colombo. It was built by the government with the benefit of soft loans – including, tellingly, one from China Exim Bank – and opened in 2013 as the country’s first greenfield airport.

One of the reasons for the site selection appears to be that of the reconstruction of a town (Hambantota) and wider region that was destroyed in the 2004 Indian Ocean tsunami. The intention is to transform Hambantota into the second major urban hub of Sri Lanka, and purposefully at a distance from Colombo so as not to over-centralise.

Although there are beach resorts and safari sites in the area, the Hambantota district is not Sri Lanka’s premier tourist location by any means. The main reason for the development is simply reconstruction.

Mattala Rajapaksa opened with several airlines having committed to service there, led by SriLankan Airlines, which actually set up a hub operation, even though the airport is not well located geographically to support hub services.

Demand was so low that the airline soon left, and currently there are no scheduled services as such, apart from air taxi services operated by Cinnamon Air using Cessna aircraft. CAPA has received no passenger traffic statistics since 2017.

It has been called "The World's Emptiest International Airport" due to its low number of flights, despite the large size of the airport.

This is quite an achievement, given the number of ‘aeromuertos’ that opened in Spain but never got going, most of which were closed down and now languish unused and unloved in the sun (except for parking unused aircraft right now, that is).

Unaffected by the pandemic

The total seat capacity for 2020 is 20,610 which is actually over 1,000 more than in 2019, thus making it one of very few airports anywhere which have not been adversely affected by the pandemic!

According to CAPA – Centre for Aviation, data from OAG shows that all the seat capacity is concentrated into three ‘waves’ of hour blocks daily (0700-0900; 1200-1300; and 1700-1800), with flights to two places – Katugastota (Kandy) in the centre of the country, and Anuradhapura in the north, probably for tourist reasons. 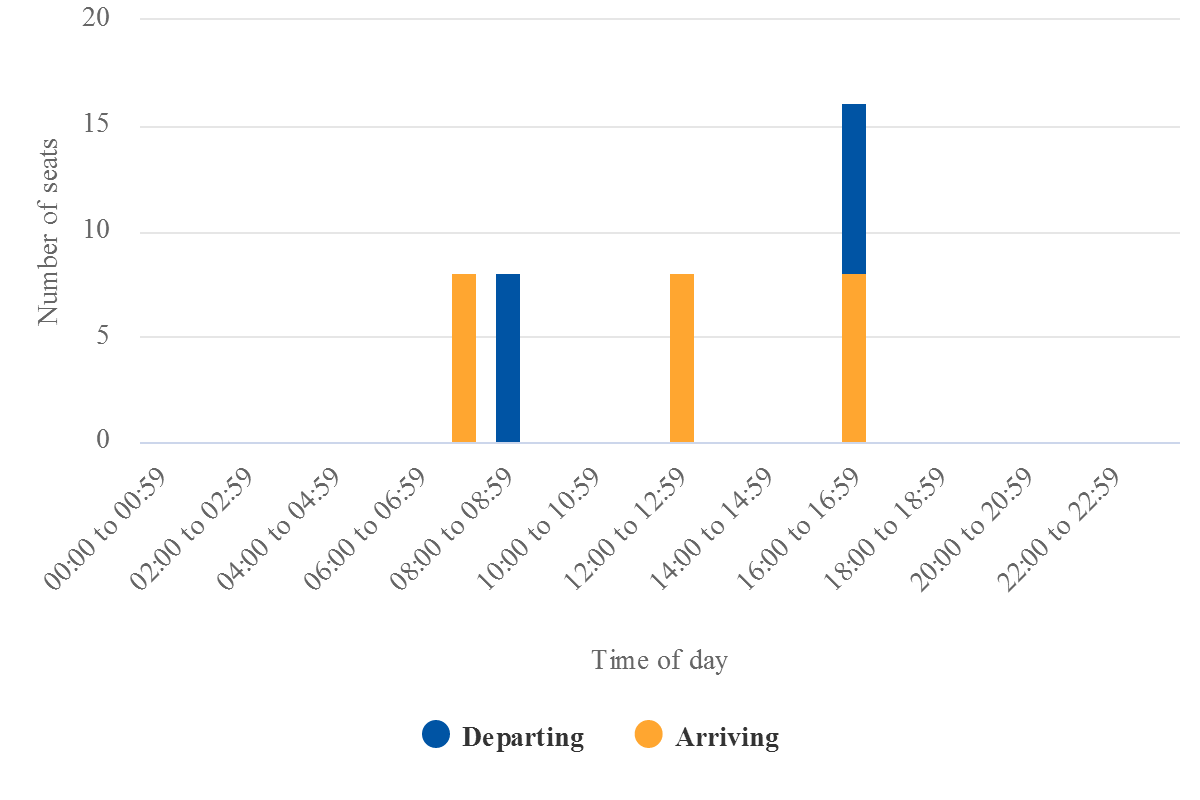 Mattala's usage is being diverted towards MRO and cargo activities, possibly aircraft storage. The access road to the airport is now used for farming purposes, and at night by elephants. From white elephant to real elephant, one might say.

It is still possible that a joint venture partner could be found, possibly from the private sector in India, but political drivers connected to China would not play a part there. The most likely prospect is that Mattala will be classed as an ‘aeromuerto’ and find its place in the sun.