Most recently, Spirit Airlines filed with the US Securities Regulators to raise up to USD300 million in an IPO. The LCC stated it would retain USD150 million of the net proceeds and use the remaining funds to repay debt and as a termination fee for professional services with Indigo Partners.

The carrier reportedly owed USD264 million on notes as of 30-Jun-2010, including principal and accrued and unpaid interest. The carrier added that it posted a net loss of USD2.8 million in the six months ended 30-Jun-2010, compared with a net profit of USD41.5 million in 1H2009, with the results being affected by a pilots strike which hit booking levels.

The carrier plans to hold the domestic offer on 12-Oct-2010 to 19-Oct-2010, with a tentative listing date set for 25-Oct-2010. The carrier will now hold a domestic roadshow on 24-Sep-2010 and international roadshow and bookbuilding on 27-Sep-2010. CEB plans to offer 186.6 million common shares at a price of no more than PHP150.00 per share. It also has an overallotment option of up to 28 million shares. The carrier plans to distribute 70% of the shares to international investors, with the remainder to be sold to domestic investors.

Spring Airlines to conduct IPO in Shanghai in 2011

Also last week, Spring Airlines spokesman, Zhang Wuan, stated the Chinese LCC plans to list its shares on the Shanghai Stock Exchange in 2011 to fund its aircraft purchases, with Mr Zhang confirming the carrier plans to expand its fleet to 100 aircraft in five years.

Spring Airlines, which could become the first privately held Chinese LCC to list in Shanghai, operates 21 A320s covering a network including more than 50 domestic cities and one international route to Ibaraki.

Among the non-LCCs, Indonesia's Government earlier this month appointed UBS and Citigroup as the international underwriters for Garuda Indonesia’s IPO. Garuda confirmed it plans to raise USD300 million from the offering.

Meanwhile, Lebanon's Central Bank Governor, Riad Salameh, stated Lebanon would delay an IPO of shares in Middle East Airlines (owned by the Central Bank) that was scheduled for 2010, due to unfavourable market conditions.

Among the already-listed LCC, shares in Tiger Airways, Cimber Sterling and Virgin Blue were all up strongly on Friday, with gains above 5%. On the other end of the spectrum, shares in Vueling and AirTran were both weaker, by 2.5% and 2.0%, respectively. 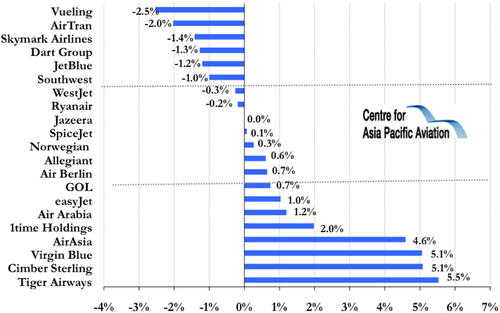