Moves to impose up to USD45 fees for carry-on bags by Spirit Airlines has raised the hackles in Congress and the Department of Transportation. In his explanation of the decision, the airline’s President, Ben Baldanza cited the following reasons for the decision: “We always look for ways to save customers money and improve their experience. Our decision to charge fees for carry-on bags relieves the carry-on crisis, smooths out the boarding process and reduces delays — all for the same total price or less".

He added, “our solution includes lowering fares further; lowering the fees for checked baggage; allowing one free personal item on board and charging for an additional carry-on bag. Those who pay for a carry-on will also get priority boarding. The new system will be a win for every passenger because we expect:

One may or may not believe that all of these positive attributes will accrue to travelers—only long-term experience with the new rules will justify the reasoning.

However, the reaction in Washington has been swift. The day after the Spirit announcement Secretary Ray LaHood said that the Department would hold Spirit’s feet to the fire on this one. New York Senator Charles Schumer decried the practice and threatened to make such charges illegal. Then yesterday, the Senate introduced new legislation that would prohibit the fee.

So much for free enterprise!

Baldanza correctly observed that passengers have choices - and if this move fails, Spirit will pay a price for its decision.

Cheaper base with more choice?

The rationale for all of these charges has been rooted in the concept that travelers should get rock-bottom prices and then be allowed to choose those components they believe will add personal value, and for which they are willing to pay extra. The question is, does that happen?

Just to examine the reality of this claim, CAPA examined pricing for a journey from Los Angeles to Ft Lauderdale, departing Tuesday, 20-Apr-2010 and returning a week later on the 27th. The results were very interesting.

To get an overview of the price spread, the first stop was at Kayak.com where the three nonstop options were displayed with the fare. Delta was priced at USD299, Virgin America at USD394 and Spirit at a rather stunning USD423. This site did little to support Spirit’s claim of offering the lowest fare.

More interesting was the fact that after the Kayak screen had been up for a few minutes, a separate Priceline.com display popped up and offered the same Virgin America flights for USD239 with Delta remaining at USD299, but no Spirit fare.

The next step was to move to the individual booking sites and see what fares might be offered directly from the airlines. Delta remained steadfast and reaffirmed its price of USD299. Spirit, however, considerably bettered the Kayak offer, pricing the journey at USD296. Virgin America, on its site, was identical to the Kayak quote of USD394.

So, what does it cost to fly from LAX to FLL on 20-Apr-2010? The answer is, it depends on a great many variables: one’s knowledge of the market players, one’s ability to effectively use multiple search engines and perhaps most of all, one’s stamina.

Finding the best fare is not for the faint of heart and even once the base fares are isolated, the various fees and charges (often needing separate research) can once again change the equation. If one is traveling with only a carry-on, both Virgin America (Priceline quote) and Delta are cheaper due to the lack of any fee for the bag.

The picture might be further muddled by flight timings or frequent flyer loyalties or by throwing in connections where one might find even more options for consideration.

Since airlines began to “unbundle” fares some years ago, they have repeatedly stressed the simplicity of buying a simple, low fare and then adding those extras deemed beneficial. Many carriers have lauded this new transparency as providing the ability to customise travel and rationalise cost—all of benefit to consumers.

While this was only one exercise between one city pair on a set of fixed dates, anyone who travel frequently and takes the time to research options will confirm that this example is far from unique.

“Simplified” pricing is anything but—at least for the consumer. Not only do fares vary between airlines, but they can also differ considerably on the same carrier, based on the search method employed.

There is probably little chance that the trend will be reversed and, if anything, the challenge presented by component pricing will become more complex.

A fee too far?

In the regulatory arena, the issue has taken on a comic air for being ridiculous. First, how exactly is LaHood going to hold Spirit’s feet to the fire? The airline is not doing anything illegal. It is part of the free market and this is its business model; a model that is very successful overseas.

In Ryanair’s case, clearly a lot of people have decided in the affirmative of the user-pays model. Southwest (ironically on whose model Ryanair was formed) is meanwhile firmly entrenched in a different approach, one that lets the first two checked bags fly free. JetBlue still allows the first bag free.

The rest of the US industry has not followed Spirit's lead (yet), fearing that, judging from the reaction in Washington, the carry-on bag fee may be a fee too far. They are watching and waiting to see what passengers do. The carry-on bag fee hit the market just as the fee for the first checked bag fee did – with incredulity.

But bag fees are now a firm part of the travel landscape along with a host of other fees. So, time will tell.

The legislation introduced yesterday by Senator Charles Schumer and others aims to nip carry-on bag fees in the bud. Citing the need for items essential for health, work and safety be exempt from fees, the legislation would ban airlines from charging fees for carry-on baggage.  The bill would also require airlines give advanced notice of fees for checked items.

There are two serious issues at play here, the first of which is making the booking process more transparent by ensuring that all the fees for which a passenger might opt are rolled into the bottom line before the passenger hits the “buy” button.

The other issue is where Senator Charles Schumer started out with his outrage at Spirit’s carry on bag fee – the tax angle. He initially wrote the Department of the Treasury asking it to do something that would capture revenue from fees – specifically rescind the tax-free status of fees on services that are not deemed necessary for air transportation. That of course, would make the government little better than the airlines – trying to grab a piece of an every increasing pie. The question then becomes ensuring that if taxes are imposed on fees, they end up in the diminishing Aviation Trust Fund rather than the general fund.

It has been more than a year since the House wanted to address the tax angle since the recession diluted demand, triggering a downward trend in the 7.5% ticket tax going into the Aviation Trust Fund. Looking for a way to make that up the House suggested taxing the new fees. The House is pursuing the tax angle as part of its Reauthorization legislation. Spirit was cheeky enough to suggest lowering the ticket price and charging for carry-on bags actually mitigated some of the tax burden on passengers.

Perhaps the most ludicrous statement on the Spirit action came from the senior Senator from New Jersey. “Airlines are taking advantage of a tax loophole and reaping financial benefits at the expense of travelers,” said Senator Frank Lautenberg. “It's time to say enough is enough. Let's put an end to passenger mistreatment and restore consumer protections." See related report: US airline service quality survey rises. But what’s behind the numbers?

It must be remembered that fares have remained flat since 1998 and actually have declined for decades – and will continue to do so according to the FAA’s own forecasts. Air travel is still a bargain because of the competition wrought by deregulation.

Lautenberg’s comment would be laughable if it were not for the fact that airlines already have a pretty hefty special tax burden of about USD18 billion annually. 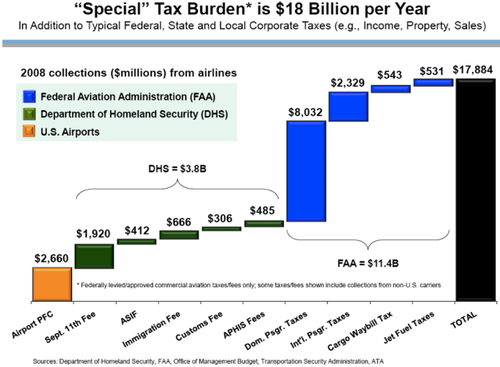 While Spirit’s actions may be a red herring, it has triggered action in Washington that would not do anyone any good, least of all the airlines, the hundreds of thousands of airline employees or the passengers.