SpiceJet’s shares gained 3.5% on reports in the local media that WR Ross & Sons, Goldman Sachs and Dubai’s Istithmar may increase their stake in the carrier to 40.27%, through the conversion of foreign currency convertible bonds and warrants to equity.

In 2008, the companies invested USD100 million in the carrier, of which WR Ross invested USD68 million. The holding of the airline’s promoters, the Kansagra family in London, could be reduced to 7.69%, which would increase total foreign shareholdings in the airline to 47.96%, just under the current 49% foreign ownership limit.

According to the Commission, Korean Air and Asiana told travel agents they would be allocated fewer seats during the peak season if the agencies also sold tickets on LCCs. Korean Air was fined KRW10.4 billion (USD9.2 million), while Asiana was fined KRW640 million (USD565,000). Jeju Air, Hansung Airlines and Yeongnam Air, in addition to some international carriers, were targeted by the two carriers' actions, according to the Commission. Jeju Air expressed hope that the decision will mark the beginning of a “more transparent airline industry through free and fair competition.”

Shares in AirAsia slipped 2.2% yesterday. The carrier’s low-cost long-haul subsidiary, AirAsia X, yesterday celebrated the first anniversary of Kuala Lumpur-London Stansted service. The carrier stated it has consistently achieved higher than 80% load factors on the route since its launch, carrying over 221,000 passengers in its first year of operation. 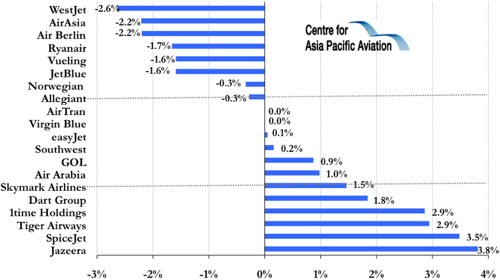