But air traffic controllers (ATCs) are unimpressed with the plans, in addition to other industrial relations concerns, resulting in a massive strike of all ATCs across the country.

AENA manages 47 airports, including Madrid and Barcelona, and has partnership holdings in 16 Latin American airports as well as London Luton. Under the plans, AENA will be divided into two parts: the airport division, which will be partially privatised, with the Air Navigation division to remain state-owned. Meanwhile, the management of the nation's two largest airports, Madrid Barajas and Barcelona El Prat, will be put out to tender to private operators under a 40-year licence system.

Deputy Prime Minister Alfredo Perez Rubalcaba stated the sales would help Spain to "reduce debt and provide more room for manoeuvre in the budget". The sales are also being used to stem fears of an Irish-style bailout. Spain reported the highest public deficit level in the euro zone in 2009 after Greece and Ireland at 11.1% of GDP.

In response to the plans, Spain's air traffic controllers (ATCs) commenced a wildcat strike on 04-Dec-2010. ATC union USCA claimed the government plans to write off the company's debt and sell the stake for a reduced price under its privatisation plans. The majority of the country’s 2300 air traffic controllers took part in the weekend strike action, forcing the government to shutdown Madrid Barajas and seven other airports, including Ibiza, Majorca and Minorca.

Spanish airspace reopened at 15:30 on 05-Dec-2010 after the Spanish Council of Ministers held an emergency meeting on the morning of 04-Dec-2010 to find solutions to the issue. Approximately 600,000 passengers were been affected by the action, prompting the government to declare a "state of alarm" for 15 days in the country. Government action obliged the controllers to immediately return to work and placed them under military jurisdiction, taking effect immediately and 50% of the country's air traffic controllers had reported to their posts by 14:00 local time. Services began to return to normal on 06-Dec-2010, with 96% of ATCs having returned to work.

It is estimated the strike could cost the country's tourism industry EUR400 million (USD532 million) and carriers more than EUR100 million in lost revenue. The government has now stated it may extend the measure to prevent any further disruptions and is considering keeping the decree in force for two months to provide time to prepare military controllers that could replace the civilian ones if necessary. Prime Minister José Luis Rodríguez Zapatero plans to keep the "state of alarm" in force for as long as necessary. It also insisted they have a "secret contingency plan" to prevent a Christmas repeat of disruption.

AENA has opened disciplinary proceedings against 442 controllers over the incident. Madrid Provincial Prosecutor Eduardo Esteban said a provincial court was currently handling investigations of 175 controllers, while other provincial courts would be investigating cases against controllers in their areas. Attorney General Candido Conde-Pumpido said the controllers could eventually be charged with sedition and face jail terms under existing Spain's air navigation law. A number of ATCs are refusing to testify, claiming the investigation should be handled by a military court following the government’s use of military authority to stop the strike action.

AENA employees also plan to strike over the partial privatisation plans. The exact dates and form of protest are to be decided after the Constitution Bank Holiday on 09-Dec-2010 after the CCOO, UGT and USO unions hold a meeting with members of the USCA air traffic controllers union. Members of the AENA Board have described the announcement of the granting of concessions for the private management of Madrid Barajas and Barcelona El Prat airports as amounting to "bumping off AENA".

USCA stated the strike action was also in defence of what the government claims are the ATC’s "intolerable privileges". Spurring the strike action, the government and AENA ruled ATCs must work 1840 hours a year, higher than the 1670 hours, or 32 hours a week, published in the Royal Decree. The government stated the 1670 hours p/a only includes time spent on aeronautical activity, with the higher 1840 hours p/a including time spent on training, union time, paternity leave, and other duties away from the control tower. USCA criticised the time taken for paternity or sick leave is not included in the lower number of hours p/a.

ATCs are also still unimpressed with AENA's decision earlier this year to reduce their pay. In Aug-2010, AENA and USCA signed a new minimal collective agreement for ATCs, which guarantees service provision and industrial peace. The new agreement followed a vote earlier in Aug-2010 by Spanish ATCs to commence strike action in mid-Aug-2010. The USCA stated 92% of the country's 2300 controllers with a right to vote cast ballots and almost all, 98.25%, voted in favour of the strike. The strikes were called off after the parties reached the agreement.

Negotiations between AENA and USCA commenced in Feb-2010 over a government decree to reduce salaries. Under the decree, the government all but eliminated overtime hours and thus cut air traffic controllers' pay which reached as much as EUR600,000 per year. This is compared to an average yearly salary in Spain of EUR20,000.

The new agreement between AENA and USCA considers the 12 points raised by the air traffic controllers during negotiations and fits them into the legal framework established by Law 9/2010 and Royal Decree for working conditions including activity and rest times.

The agreement provides, among other things:

However, USCA claims AENA refuses to meet the terms of the pre-agreement regarding the employment of new staff and failed to meet AENA for negotiations in Oct-2010. The union now plans to boycott further talks. AENA responded stating the union is “absurd” and that controllers are not meeting the pre-agreement themselves as absentee levels remain high and they are refusing to work overtime.

Spain's Minister for Development also conducted a meeting on 03-Sep-2010 over the application for the redundancy of 400 air traffic controllers from a total of more than 1900. The group have used a clause in their working conditions, Article 152, to apply for redundancy because working conditions have changed. It grants 45 days redundancy pay for each year worked with a maximum payout of 42 months. AENA reportedly said the number of resigning controllers was only 180 and said that they would only get 20 days compensation per year worked.

AENA expects the new agreement will allow it to meet its objectives of efficiency, reduce en-route rates by 15% and write off the operating deficit of air navigation. However, the "minimal agreement" may not be enough to effectively reach performance targets, with costs still remaining quite high and aircraft growth remaining low. 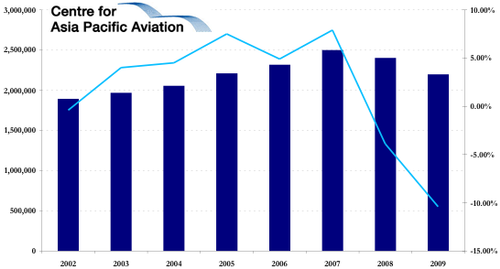 The decline led AENA to review its operations to establish a series of measures it could adopt to provide relief for airlines. The ANSP has now implemented a number of strict new budgetary restrictions and plans to adopt further measures to reduce overall ATM provision costs. AENA is limiting the hiring of new staff, has commenced renegotiating contracts with some suppliers and is now adopting what it terms a “restrictive policy” with regards to travelling expenses. Other discretionary spending will be severely curtailed.

The ANSP also implemented a freeze on ATM charges for 2010, to provide relief for struggling airlines and support the Spanish tourism market, following difficult years in 2008 and 2009. According to IATA, Spain is Europe’s most expensive ANSP. The charges freeze is expected to have a significant impact on the ANSP’s revenue this year. It had already expected to undergo major shortfalls, due to the downturn in traffic.

However, it will be a major challenge for AENA to keep charges low. According to EUROCONTROL, AENA had gate to gate total costs of EUR1320 million in 2008. AENA had the highest gate to gate ATM/CNS provision costs out of all European traffic controllers in 2008, with costs of EUR1214 million. The ANSP ranked third in 2003. AENA also had the third largest economic cost-effectiveness KPI for 2008, which includes both the financial cost per unit output and a measure of the cost of ground ATFM delay.

Distribution of ATM/CNS provision costs in 2008 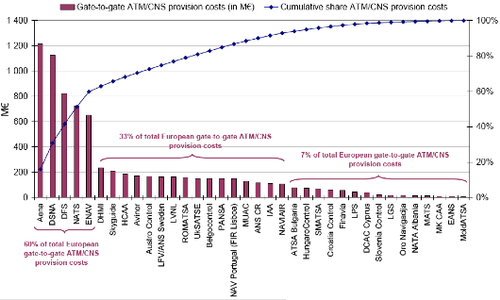 For 2008, AENA experienced both a rise in unit ATM/CNS provision costs and a rise in the costs of ATFM delays per unit output. 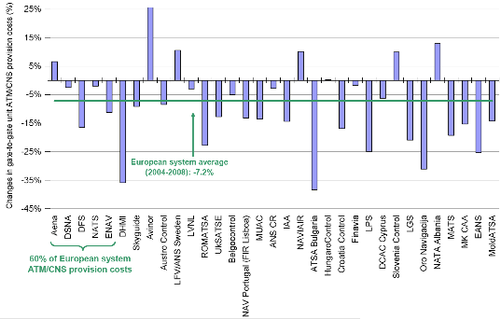 Association of European Airlines (AEA) condemned the circumstances which caused the paralysis of air traffic within, to and from Spain due to the ATC strike. The association stated carriers were rendered helpless due to a "calculated act" by controllers to bring passengers misery.

According to the AEA, the fact that the Spanish Government had to react in the way it did to re-establish a functioning infrastructure in Spain, is symptomatic for the need for structural reform. AEA Secretary General Ulrich Schulte-Strathaus stated in some areas of European air traffic control, “inefficiency is a fact and the situation must be swiftly addressed”. He added the strike in Spain “demonstrates both the pressing need for an overhaul of the European ATC system, and the disproportionate power of a relatively small number of individuals to block the whole system”.

ATC income and inefficiency is certainly contributing to AENA’s high costs and other issues. Among the largest ANSPs, AENA has by far both the lowest productivity and the highest employment costs per ATCO-hour. This raises a serious performance issue.

Productivity and ATCO employment costs for the five largest ANSPs (2008)

Productivity has been affected by the decline in air traffic movements in the country over the past two years. However, movements may now be on the improve after reaching positive growth in Oct-2010. In its most recent results, AENA reported a 0.9% year-on-year rise in aircraft movements for Oct-2010, to 188,228. This was led by a 8.9% increase in movements at Barcelona and a 8.1% rise in movements at Malaga. For the year-to-date, aircraft movements are down 2.5% to 1.8 million. 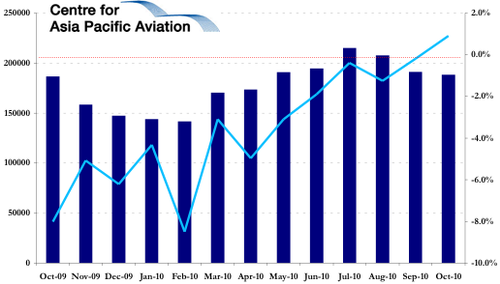 AENA certainly has a massive challenge ahead with the need to address both industrial relations concerns and high costs. A potential recovery in aircraft movements may be on the horizon, but it is not guaranteed and AENA will have to look to new strategies to boost performance.