Southwest Airlines (+2.1%) announced plans to issue 12 million shares or approximately 1.6% of total shares for use in an incentive plan for employees, directors and advisers, following a vote by shareholders to triple the company’s stock-incentive programme in addition to the original 6 million. The plan has been used to grant 3.7 million stock options in the past, including 450,000 to Chairman and CEO, Gary Kelly, and 170,000 and 165,000 respectively to Executive Vice-Presidents, Ron Ricks and Michael Van de Ven.

In Canada, Porter Airlines delayed announcing details of its proposed IPO until 27-May-2010, with reports the carrier will seek to raise CAD120 million with 17-20 million shares to be released at CAD6-CAD7 each. Porter plans to use funding from the IPO to finance the purchase of seven new Bombardier Q400 turboprops over the next year.

The Air Transport Association of America (ATA) reported during trading that US airline passenger revenue, based on a sample group of carriers, rose 12.5% year-on-year in Apr-2010 - marking the fourth consecutive month of revenue growth.

Approximately 0.5% more passengers travelled on US airlines during the month, while the average price to fly one mile rose nearly 14%. International passenger revenue rose 15%, led by a 37% gain in transpacific markets.

ATA President and CEO, James C. May stated “the April jump in passenger revenue is a positive sign, and one showing that the US industry is recovering gradually from last year’s severely depressed levels. Last year, domestic round-trip fares averaged USD28 less than they did a decade earlier. In fact, year-ago fares were a staggering USD117 short of keeping pace with inflation”. 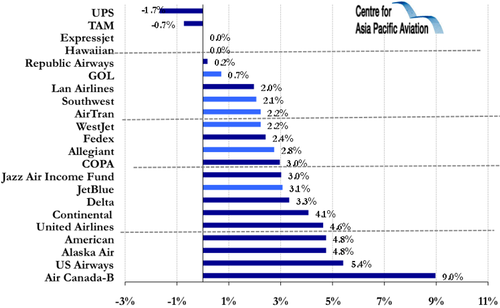