Southwest Airlines, the US' fourth force, does not neatly fit the emerging US business models

Southwest Airlines sits at an interesting crossroads as the US market reaches a high level of maturity ushered in by legacy carrier consolidation and its own merger with AirTran Airways that is targeted for completion in 2014. With the changes, three distinct business models are emerging in the US – full service, hybrid and ultra low-cost.

But Southwest does not fit neatly into any of those categories, which the carrier might view as a positive attribute as it examines how to evolve its business model. Southwest's history of a skittish approach to change leaves many questions unanswered as to how the airline can retain the attributes that make it a recognisable brand while making key decisions to ensure a large pipe of steady revenue generation.

The low-cost pioneer during the last couple of years has seen its edge in that regard soften as Chapter 11 reorganisations and consolidation among the US majors has resulted in those airlines lowering their unit costs. During 2012 Southwest’s unit costs increased 4.2% year-over-year, and on a stage length adjusted basis there was roughly a 30% difference in its nearly USD7 cent unit costs compared with Allegiant Air, who along with Spirit is considered the new breed of ultra low-cost carrier.

At the same time, Southwest’s 2012 passenger unit revenue growth was just 2.6% compared to 3.6% at JetBlue.

Southwest operates a fleet of nearly 700 aircraft, making it more than three times the size of JetBlue, yet JetBlue (which is notably a much younger carrier and has the accompanying younger workforce) managed to attain a unit revenue premium to Southwest, with just a 4% difference in unit costs. JetBlue has explained that its strategy is not to have the lowest costs or the larger costs associated with legacy business models. It believes it has just the right cost levels to execute its business model that is medium-frills including product bundling that includes product upsells such as expedited security and seats onboard with more room.

While JetBlue has carved out a definitive business model to attract business and leisure customers to balance out peaks and troughs in leisure travel seasonality, Southwest is typically a slow adapter to shifting its business focus. In some ways the carrier’s cautious approach is understandable given its worldwide acclaim as the airline that ushered in the low-cost carrier era.

But with inevitable shrinking of the US domestic market place that will occur once American and US Airways complete their merger, Southwest will need to have a fresh look at holes in its business model to ensure it can compete effectively in the new US domestic reality. Even prior to American and US Airways announcing their intentions to merge, US domestic seats and available seat miles fell sharply from 2Q2007 through 2Q2013, according to statistics from Airlines For America (A4A), even factoring a slight increase from 2Q2012 to 2Q2013.

Based on current schedules in Innovata (10-Mar-2013 to 17-Mar-2013), American and US Airways combined hold nearly a 25% seat share of the US domestic market. Using those statistics as a baseline Southwest slips into fourth place in the market place based on seat share; so the carrier needs a clear focus going forward in order to compete effectively. 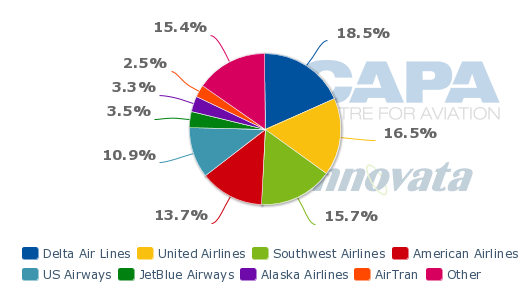 Working to increase revenue by USD1 billion in 2013

Southwest has put forward a plan to increase its top-line revenue by USD1.1 billion in 2013, USD800 million of which will be driven by its AirTran acquisition, the introduction of higher-density 175-seat Boeing 737-800s, adding six seats to its 737-700s and a reservations system replacement.

The remaining USD300 million will be driven by gains from a new network management system, network optimisation to maximise turn times and new ancillary revenue streams from selling select boarding positions at the gate and tightening flexibility around restricted fares.

Additionally, Southwest is in the midst of implementing a codeshare with AirTran, and as of 23-Feb-2013 the carriers were selling codeshare itineraries from 39 airports, and carrier CFO Tammy Romo told investors that the codeshare will be fully implemented for the combined 97 destinations in Apr-2013.

Southwest is also replacing its reservations system, and expects to complete the first phase, which will support international itineraries, in 2014. The carrier will engage the first Southwest-branded international flight in Sep-2013 when it assumes AirTran’s service between Orlando, Florida and San Juan, Puerto Rico. Southwest will compete with JetBlue, which has a focus city in San Juan, and Spirit Airlines on the pairing.

The route offers an interesting set of competitive dynamics reflected in JetBlue’s medium frills that include free satellite television and gourmet snacks and Spirit’s bare bones low-fare service that entails added charges for essentially any item beyond the ticket price. Southwest’s cost structure does not support offering the same prices as Spirit, yet it cannot charge more than JetBlue given Southwest does not offer assigned seating or free inflight entertainment. The competitive set illustrates Southwest’s challenge as it works to create a product that remains relative in the US market place.

As Southwest works to deliver its promised USD1.1 billion rise in revenues during 2013, the carrier faces questions over other potential revenue streams as all US carriers capitalise on ancillary revenues from baggage fees, priority boarding, seat selection and extra legroom and expedited security screening.

Southwest is experimenting somewhat with priority boarding by selling early boarding slots at the gate, but seating remains unassigned. Its broad marketing campaign from a few years ago dubbed “Bags Fly Free” has a deep resonance among customers, so it would be nearly impossible for the airline to consider baggage fees. However, it will continue collecting luggage fees on AirTran branded flights until the integration is complete.

Ms Romo assured Southwest was looking at other avenues to grow ancillary revenues, and indicates more charges could be harvested from tightening restrictions around some of its lower fares, but stressed those options were not necessarily a change fee, which is something the carrier has touted as part of its customer friendly image.

Aside from devising the low-cost, low-fare point-to-point business model, Southwest is typically gun-shy in adopting any new business tactic that would shatter its 40-plus year-old image. That is one of the reasons behind the questions arising over how the carrier will expand its revenue in the long term. In some ways the carrier has pigeonholed itself, and could be limited in introducing elements into its business model that could make a significant contribution to revenue.

Southwest takes a conservative approach in building out international markets and de-hubbing Atlanta. But that conservative mindset may hold it back

A driving force behind Southwest’s pursuit and ultimate acquisition of AirTran was to accelerate Southwest’s foray into near international service. After the 2011 closure of the acquisition Southwest expanded AirTran’s existing service to Mexico through new flights from Orange County, California to Cabo San Lucas and service from San Antonio, Texas to Cancun and Mexico City.

Another key impetus for Southwest’s pursuit of AirTran was gaining access to Atlanta, AirTran’s hub. More than a year after the transaction’s close Southwest is de-hubbing Atlanta after eliminating some under-performing smaller markets from the airport and bolstering service to its stronger markets. It is not clear if Atlanta is delivering the benefits originally calculated by Southwest, but it would seem Atlanta is a big driver in the planned USD400 million in merger synergies Southwest estimates achieving this year.

Southwest made a strategic move in acquiring AirTran, building up its scale ahead of the last US major tie-up between American and US Airways. But Southwest has opted to abandon AirTran product attributes including a business class, which could have provided a significant amount of incremental revenue and helped the combined carrier retain higher-yielding passengers in Atlanta.

Southwest worked quickly to fashion its own response to US major consolidation, but remains stuck in a conservative mindset that will hamper its efforts to meaningfully expand revenue during the next few years.