Southwest officially became an international airline in early Jul-2014, when it transitioned service operated by its AirTran Airways subsidiary to its own brand. The acquisition of AirTran in 2010 allowed Southwest to take a low-risk approach to introducing its own branded flights to international destinations.

For years prior to acquiring AirTran, Southwest often talked about its aim to eventually extend its domestic network beyond the US borders. Purchasing AirTran allowed Southwest a low-cost and low-risk way to fully study and understand the nuances of operating to Mexico and the Caribbean before assuming the routes under its own brand - which is obviously sacred to the company.

Even as the expansion into international markets is a key pillar of Southwest’s long-term strategy, the reality is markets outside the US will only comprise a small portion of Southwest’s capacity in the near-to-medium term. But as Southwest grows internationally it may find itself facing increasing competition from Spirit and JetBlue, raising interesting questions about Southwest’s longer-term pricing traction and revenue performance on some international routes.

Southwest faces some familiar and some new competitors on international routes

Those flights joined service launched in 2013 from San Juan (located in the US territory of Puerto Rico) to Baltimore, Fort Lauderdale, Atlanta, Orlando, Tampa and Houston.

Southwest faces familiar competitors on many of its international routes. Schedules in CAPA and OAG show that for the week of 7-Jul-2014 to 13-Jul-2014 Delta operates flights from its Atlanta hub to Montego Bay and JetBlue offers service from Orlando to Montego Bay.

Both Frontier and United operate service from Denver to Cancun and Los Cabos and from Chicago O’Hare to Punta Cana (Southwest will operate service to Montego Bay from Midway).

Southwest will be up against competition from Aeromexico and Interjet on flights from San Antonio to Mexico City and from Interjet between Orange County and Mexico City. Southwest is obviously directing the bulk of its efforts to US point of sale, and AirTran has been operating on those routes for some time, so the transition to Southwest-operated flights does not drastically alter the existing market dynamics.

Southwest began selling international itineraries under its own brand in Jan-2014 after making a long-awaited investment in the technology necessary to offer international service.

The acquisition of AirTran also helped Southwest accelerate its plans to operate international service as AirTran operated several routes to the Caribbean and Mexico when it was acquired by Southwest in 2010.

From a broader perspective, Southwest needed to branch out beyond the US domestic market place, as that reaches seeming maturity. With the bulk of US consolidation complete, the market is now in a solid state, with the three large network carriers consolidating their traffic (and pricing) across their hubs and Southwest straddling mid-size strongholds such as Milwaukee and Kansas City and larger markets including Atlanta, New York and Washington, DC. 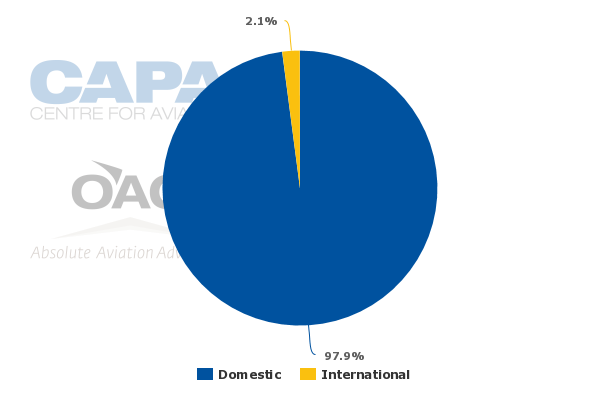 Management has stated that while there are numerous opportunities to increase its international scale, Southwest's long-term target for international ASM deployment is 10% to 15%, which compares with current levels of 17% at Delta, 23% for United and a combined 36% for American and US Airways (all figures are based on CAPA and OAG data for the week of 7-Jul-2014 to 13-Jul-2014).

The terminal is scheduled to open in late 2015, which indicates Southwest may catch its breath with current international service and then start a second wave from Houston next year.

Houston Hobby is Southwest’s sixth largest base measured by seat deployment, and the overall market in Houston may be ripe for lower fare international service to destinations in the Caribbean, and at some point Latin America.

United remains in the midst of a tumultuous merger integration, and has its attention focussed elsewhere. With Southwest’s existing scale in Houston, the airline should not have a problem quickly spooling up international markets to profitability. 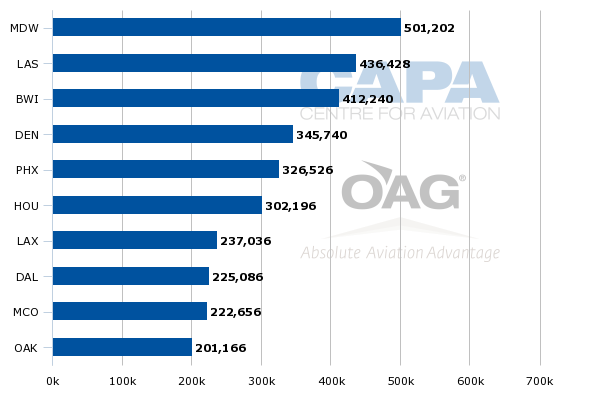 Southwest will likely stick with Cancun and Mexico City in its initial raft of international service from Hobby. Its existing service to other markets including Aruba and Montego Bay are also likely candidates for Houston service. Although Southwest has stated it has aircraft range capable of reaching upper South America, the airline will likely wait for some period of time before it ventures into those markets given its typically conservative approach to shifts in its business strategy.

One wildcard in Southwest’s international aspirations is Spirit Airlines. Spirit serves multiple international destinations in the Caribbean and Latin America. Although Spirit is a much smaller carrier than Southwest, (57 aircraft at Spirit vs 607 jets for Southwest), Spirit deploys nearly 16% of its ASKs into international markets, and it has expanded its international offerings beyond Fort Lauderdale. It presently serves Cancun and Los Cabos from Dallas/Fort Worth. 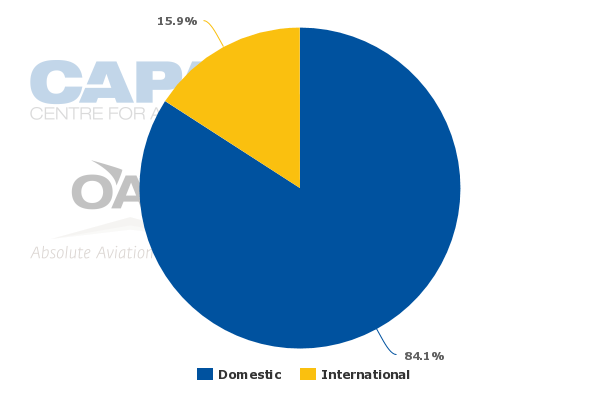 Spirit has made a push from Houston during the past couple of years, seeing an opening to stimulate low-yielding traffic. Even though Spirit declares its major focus is in the US domestic market, the airline has had international expansion pretensions in the past and is no doubt studying the possibility of expanding its international footprint from other US points outside Fort Lauderdale.

It could be several years before Spirit contemplates any type of international service from Houston; but if there is a whiff of success, Southwest could at any time find itself competing against the ultra low-cost carrier, which may affect Southwest’s pricing in those markets at some point in the future.

Is there an opportunity for more low-fare international service from South Florida?

Spirit’s international network from Fort Lauderdale is vast, as it covers most of the major destinations in the Caribbean and several markets in Latin America. Those dynamics create some questions about the type of passengers Southwest aims to target from South Florida.

Southwest cannot match Spirit’s base fares, and does not have the same product proposition as JetBlue, who is massively building up Fort Lauderdale. 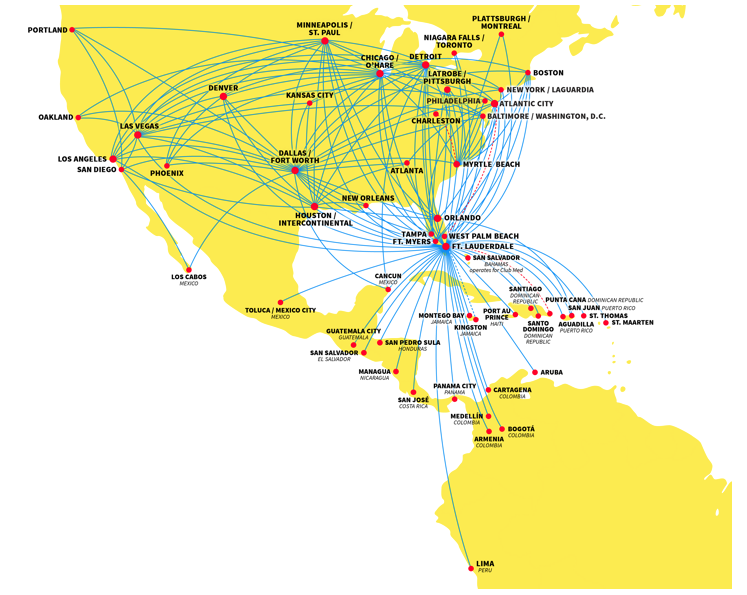 Southwest already has some direct competition with Spirit and JetBlue from Fort Lauderdale to San Juan, Puerto Rico as all three airlines operate in the market, and for the moment are co-existing.

But there is still a big question as to whether latent demand remains in South Florida given Spirit’s long-standing status as the ultra low fare alternative to the Caribbean and Latin America, and JetBlue’s more mid-level attractive product positioning. It seems the visiting friends and relatives (VFR) and price-sensitive passenger segments are well covered by Spirit and JetBlue, and JetBlue’s aspirations for international service expansion at Fort Lauderdale are well known. The revenue potential for Southwest from international service at Fort Lauderdale may prove lower than other points in its network.

Southwest has a solid foundation for its international aspirations – for now

The possible changing dynamics in Fort Lauderdale are off in the future as Southwest sets its sights on building up an international presence in Houston, which seems like a solid proposition given its power in the market.

Southwest also has the advantage of not having its international markets create an initial revenue drag since AirTran has been operating those routes for some time.

By being able to leverage a foundation built by AirTran, Southwest created a smooth entry for itself in the international arena; but over the long term it needs to be prepared to face challenges from younger and arguably more nimble airlines that already have a wealth of knowledge about the international market place.