South African Airways (SAA) reported a 44.5% year-on-year increase in net profit to *USD81.4 million for the 12 months ended 31-Mar-2010, attributable to a 25% decline in the average fuel price during the period. The carrier stated the increase in profit was achieved despite a 2.4% decline in passenger numbers and a 14% slide in cargo revenue. SAA returned to profitability for the first time in three years in FY2009.

The carrier’s CEO, Siza Mzimela, stated SAA may form partnerships with other companies to expand its business in the “growing intra-African travel”. No further details were disclosed. Meanwhile, Ms Mzimela added the carrier is “relatively confident” it will not be fined for fixing the price of fuel surcharges and cargo rates.

Mango CEO, Nico Bezuidenhout, stated the carrier, the LCC subsidiary of South African Airways, reported a profit before tax of USD2.6 million and a 26% year-on-year increase in net profit for the 12 months ended 31-Mar-2010, despite it being “one of the most challenging periods in aviation history”. Mr Bezuidenhout added the LCC was able to continue to stimulate demand with its low fares despite the South African domestic market shrinking by 10% over the past 24 months, resulting in the carrier increasing its market share to more than 15% on the routes it operates. Mango has transported more than five million passengers over the past three years. Looking ahead, Mr Bezuidenhout believes market conditions will remain difficult as the global economy continues its slow recovery. 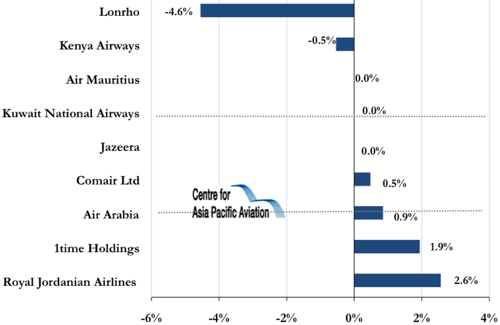