South African Airways (SAA) is planning to introduce a premium economy product as part of its long-delayed widebody fleet renewal plan. New widebody aircraft to replace its current fleet of A330s and A340s along with a new premium product mix are critical elements of SAA’s plan for turning around its highly unprofitable long-haul operation.

SAA will join a growing list of airlines to add a premium economy product. As premium economy becomes more common, airlines which had been holdouts such as Singapore Airlines are increasingly being pressured to join the trend.

For SAA, the tipping point is its inability to compete effectively on its largest international destination, London Heathrow. Johannesburg-London should be a lucrative route but has become SAA's biggest loss-maker.

This is Part 2 in a series of analysis reports on SAA’s new business plan and outlook. The first part examined the carrier’s three Asian routes and the prospects of improving SAA’s position in the South African-Asia market through a partnership with a Gulf carrier. This part looks at the London route and some of the broader challenges facing its long-haul operation, which SAA is hoping to fix by renewing its widebody fleet and introducing premium economy.

SAA’s long-haul network is now down to 10 routes following the late Mar-2014 suspension of Buenos Aires. In Europe, SAA serves only three destinations – London Heathrow, Frankfurt and Munich – as an earlier restructuring eliminated Paris and Zurich. SAA in 2012 also dropped Cape Town-London, its only long-haul route that did not originate at its main Johannesburg hub.

All the long-haul routes dropped by SAA over the years were big loss-makers. But all 10 of remaining long-haul routes are also now unprofitable. Somewhat surprisingly the biggest losses are on London, which historically has been SAA’s largest international market. SAA says it is currently incurring losses of about ZAR300 million (USD28 million) to ZAR350 million (USD33 million) per year on the Johannesburg-Heathrow route.

On a per flight basis SAA’s losses are highest on Johannesburg-Beijing, which has been losing about ZAR300 million (USD28 million) per year or about ZAR1 million (USD92,000) per one-way flight. For London, the average loss per one-way flight has been approximately ZAR220,000 (USD20,000) – still a staggering amount and only slightly less than the approximately ZAR270,000 (USD25,000) that was lost on a per flight basis on the now axed Johannesburg-Buenos Aires route.

Buenos Aires however was not a strategic route and in a market, Argentina, that has seen shrinking demand. London-South Africa is a huge local market and remains strategically important for SAA.

The UK has a large South African expatriate community while there is also strong leisure and business demand from both ends. Johannesburg-London is still SAA’s largest international route by a wide margin based on ASKs and is also by a very small margin currently the largest route based on weekly seats. 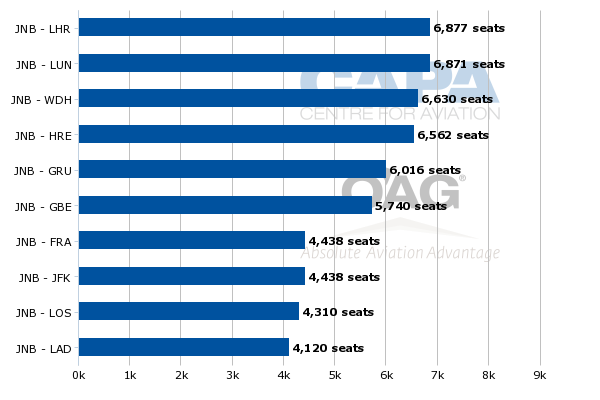 At the end of Mar-2014 SAA further reduced capacity to London as it switched one of its two daily flights on the Johannesburg-Heathrow route from A340-600s to A330-200s. SAA currently accounts for a 24% share of total seat capacity between South Africa and London, down from a 29% share in Jun-2013.

British Airways has a leading 60% share of non-stop seat capacity between South Africa and the UK while Virgin Atlantic accounts for the remaining 16%, according to CAPA and OAG data. BA currently has two daily flights to Johannesburg, including six weekly A380 frequencies and eight weekly 747-400 frequencies. BA also has 10 weekly frequencies to Cape Town, including seven with 747-400s and three with 777s.

Virgin Atlantic currently has one daily A340-600 flight to Johannesburg. Cape Town is a highly seasonal market with BA increasing to double daily 747-400 flights and Virgin also operating four weekly A340-600 flights on Heathrow-Cape Town during the southern hemisphere summer season.

In addition, several carriers compete in the South Africa-UK market with one-stop products. The Gulf carriers are particularly aggressive, offering prices that persuade passengers away from the convenience of non-stops. 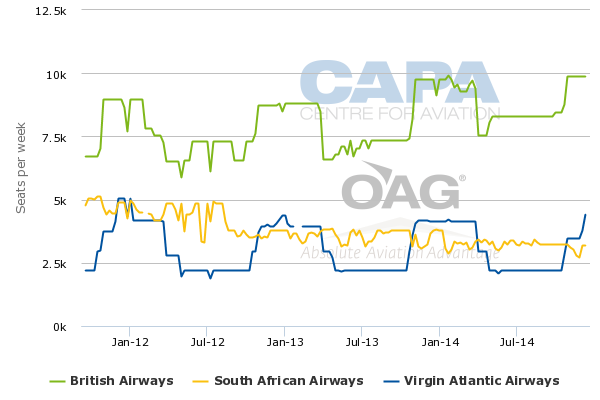 The A330-200 improves efficiency and allows SAA to offer its most up to date product as the carrier took delivery of most of its A330-200s in 2011. But SAA believes it still does not have the right product or aircraft type to be competitive in the London market. Essentially the A330-200 is an interim measure aimed at reducing losses until the carrier is able to introduce a more competitive product.

SAA has had widebody renewal as a core part of its business plan for several years but repeatedly the carrier’s management team has been unable to secure the required approvals to place an order. In the latest in a string of setbacks, SAA had to again postpone in 2013 the acquisition of new widebody aircraft following an evaluation and request for proposals which was initially issued in mid-2012.

Mr Kalawe says SAA is now preparing a new tender which is expected finally to result in the selection of new widebody aircraft by the end of Oct-2014. He says SAA is in the process of hiring a technical advisory firm which has been tasked with helping the carrier manage and fast-track the evaluation process.

Over the next couple of months SAA and the external firm will relook at the carrier’s network and fleet plan to determine the specifications and quantity. But SAA is expecting to seek about 25 widebody aircraft of about 300 seats. This is similar to what the carrier was seeking in the last tender but the delivery slots SAA had tentatively secured from Airbus and Boeing during the last round of negotiations are no longer available.

SAA had lined up delivery slots of new generation widebody aircraft from 2017 but now expects the manufacturers will only be able to offer delivery slots from 2018 or 2019. SAA however is hopeful it can secure some earlier slots by working directly with leasing companies, which will be included in the upcoming tender process. But Mr Kalawe points out that until negotiations begin with the manufacturers and leasing companies it is hard to ascertain what may be available.

SAA is also open to considering interim solutions which would be current generation aircraft but not the same type of widebodies SAA is already operating.

Eventually the carrier plans to operate about 25 entirely new generation aircraft but it is open for now in considering acquiring one or two types. While SAA believes 300 seat aircraft are appropriate for all 10 of its long-haul routes, which rule out super jumbos such as the A380, range and payload issues could necessitate two types particularly as Johannesburg is a hot and high airport. “At this stage we are not sure if SAA should be single fleet or dual fleet,” Mr Kalawe says.

Note: Firm orders include those placed directly by the operator and by lessors assigned to the operator.
Source: CAPA Fleet Database 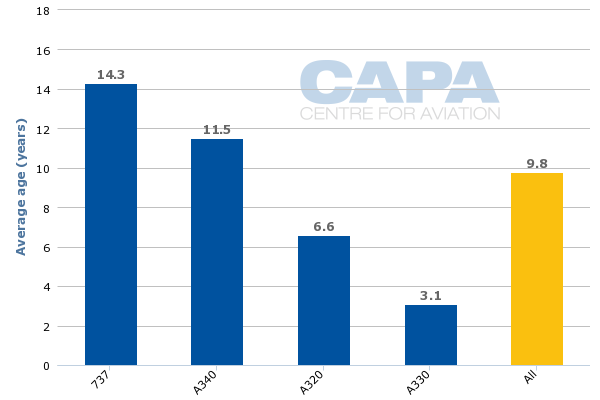 SAA is seeking to replace all of its current widebodies, with one or two aircraft being set aside for growth. While the A330s are still new they have always been intended as interim aircraft and are on lease from Aircastle.

Mr Kalawe is confident this time the tender will amount to commitments with manufacturers and/or leasing companies as the situation is now critical. “SAA should have acquired new technology three or four years ago. It’s urgent,” Mr Kalawe explains. “We have no choice this time. We have to make the decision.”

With its future widebody aircraft SAA plans to have a larger business class cabin as well as a premium economy section. This should enable the carrier to boost revenues across its long-haul network and therefore reduce losses with routes such as London potentially becoming profitable. “What we are finding especially on London-Johannesburg the guys which are doing well have three classes – standard economy, premium economy and business class,” Mr Kalawe says.

For example Virgin Atlantic has 45 business class seats on its A340-600s as well as 38 premium economy seats but only 233 in standard economy. This gives Virgin Atlantic 41 more premium seats than SAA on the same type of aircraft but only 42 fewer economy seats. (Virgin Atlantic and SAA used to codeshare between London and South Africa but dropped the partnership and now only codeshare on domestic UK flights beyond London under the Little Red brand.)

SAA is at competitive disadvantage as it is the only carrier in the Johannesburg-London market without a premium economy product. Premium economy has gradually become more common as more carriers have introduced the product, pressuring remaining carriers to make a move. The most recent carrier to announce plans for premium economy, Singapore Airlines, resisted for several years but recognised it needed a premium economy offering to effectively compete in several of its key markets such as Australia and the UK.

Germany and US routes are performing better but are also unprofitable

Frankfurt and Munich, which are SAA's only other remaining European routes, have performed better than London but are still unprofitable. SAA had been using A330-200s to Germany but has switched to A340-600s on most frequencies (with some Munich flights still be flown with A330s). “Germany has started to become very busy for us,” Mr Kalawe says.

SAA meanwhile is switching to A330-200s on Washington Dulles, which operates via Dakar in Senegal. New York continues to be served with A340-600s.

SAA generally serves New York non-stop but stops in Dakar during non-peak months to pick up passengers on the return sector. The US routes are performing relatively well but are unprofitable overall due to losses during the non-peak periods.

SAA’s new business plan banks on new generation widebody aircraft and product improvements enabling the carrier to break even or be profitable on some long-haul routes including London. Some of its long-haul routes are expected to remain unprofitable but be maintained as they are important politically and economically.

SAA is seeking to establish a funding mechanism to provide financial support for those long-haul routes which cannot be sustained commercially. In theory this will allow SAA to not have to go back to the government for capital injections as the rest of the network, including domestic and regional international services within Africa, are commercially viable.

SAA, however, continues to seek a capital injection to help cover recent and current losses. The capital injection along with the acquisition of new widebody aircraft are important component of SAA’s new business plan which was initially completed in early 2013 but has not yet been implemented, forcing the carrier to delay its projected break-even point.

SAA had hoped to reach break even in FY2016 or FY2017 but this is now unlikely given the delays over the last year in moving forward with most components of its new business plan. The delays in implementing route cuts including Buenos Aires also led to higher than expected losses for FY2014. SAA plans to release in Sep-2014 results for the fiscal year ending 31-Mar-2014.

The short-term outlook for SAA remains relatively bleak. The performance of SAA’s long-haul network, which now accounts for all of the carrier’s losses, is unlikely to improve until the carrier is able to introduce more efficient widebody aircraft. SAA is also unable to introduce a new and more competitive long-haul product, including premium economy, until it takes delivery of new widebody aircraft.

If SAA is able to move quickly on new widebody aircraft acquisitions its outlook will improve significantly. But for now the carrier has to make do with an inefficient widebody fleet and the wrong product mix. SAA is once again at the mercy of its shareholder, the South African Government, which needs to quickly and finally allow the carrier’s management team to proceed with full implementation of the recovery plan.