Skymark Airlines tanks on A380 concerns

Shares in Japanese LCC Skymark Airlines plummeted by the daily limit of JPY150 or 15% to JPY793 – marking its steepest drop since Mar-2005. The company stated it plans to acquire four A380s plus two options for use on international services.

Skymark stock tanked yesterday as the airline ran into headwinds with markets questioning the LCC’s plans for the A380. Takagi Securities Co analyst Satoshi Yuzaki said “the plunge in the shares reflects concern about the risks Skymark faces moving into a completely different business”. Other analysts expressed similar concerns, focusing on future fuel price increases and aircraft financing, and possible difficulties with staffing, operating certificates, maintenance and unit costs.

Skymark currently operates all-economy services within Japan with a fleet of Boeing 737-800 aircraft. The arrival of the A380 and the launch of international services would be its first foray into scheduled international markets, and analysts noted that Skymark is likely to face tough competition from incumbents ANA and JAL, as well as foreign LCCs eyeing the Japanese market.

JetBlue pax up, load factor up, but shares down

Also in the US, privately-held Virgin America announced it recorded its first ever quarterly profit, posting a USD7.5 million net profit for Q3 on revenues of USD202.1 million (+22.1%). Operating profit at the SFO-based LCC was up 314.4% to USD21.0 million.

Cebu Pacific shrugged off the negative trend on the Philippine Stock Exchange index to close up 6.4% at PHP124.50. 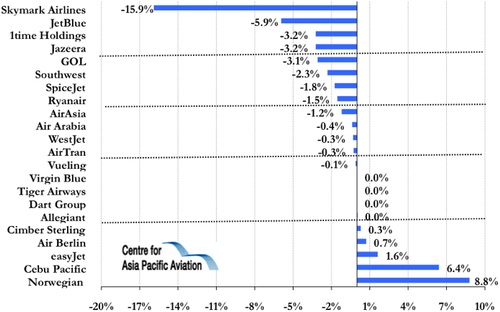