In a dramatic escalation of low-cost competition in Japan, Skymark Airlines announced plans on 12-Apr-2011 to launch an LCC operation called the "Narita Shuttle". Skymark will become the first LCC to open a hub at Narita with the launch expected several months ahead of All Nippon Airways' planned LCC JV at Kansai.

“We want to try something that no one has ever done,” President Shinichi Nishikubo said. The Shuttle will operate to up to six cities with twice daily frequency to destinations which could include Hokkaido's Sapporo (Shin Chitose Airport), Asahikawa - also in Hokkaido - from Nov-2011 and Naha (Okinawa) and Fukuoka from Feb-2012. The airline plans to expand to operate 25 daily services by Sep-2014 to nine domestic destinations, including Asahikawa, Fukuoka and Sapporo.

The ANA-led LCC makes a move

Meanwhile, ANA's LCC A&F Aviation Co Ltd, announced on 13-Apr-2011 that it has submitted its application, required by the Civil Aeronautics Act, for an Air Operators Certificate to the Civil Aviation Bureau of the Ministry of Land, Infrastructure, Transport and Tourism.

This is the first of a number of major milestones for A&F Aviation as it accelerates its start-up activities in preparation for the proposed launch of commercial services. Routes from its home base of Kansai International Airport are anticipated to be Sapporo/Shin-Chitose and Fukuoka no later than Mar-2012 and Seoul/Incheon in May-2012 using A320-200 aircraft. A&F Aviation stated it "believes that their new Low Cost Airline (LCC) will contribute to creating new cultural links between Japan and Asia as well as promoting economic growth in the region". A&F Aviation intends to make a further announcement in May 2011 detailing its branding.

Skymark plans to offer introductory fares from JPY980 (USD11.68), with an allocation of 28,800 seats, or around 20 seats per flight. About 75% of the regular fares on the shuttle would be lower than JPY10,000 (USD119). Economy return fares between Tokyo Narita and Tokyo Haneda to Sapporo prior to the 11-Mar-2011 earthquake and tsunami were generally in the USD810-860 range. 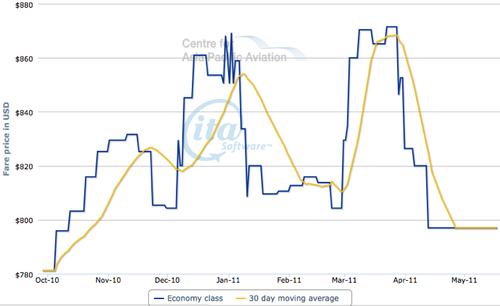 Fares listed are the lowest return airfare (3 days stay), inclusive of taxes and surcharges
Source: Centre for Asia Pacific Aviation and ITA Software
Fares data is © ITA Software and may not be copied or distributed without ITA's express permission. 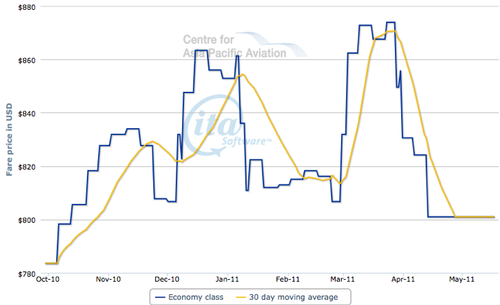 Fares listed are the lowest return airfare (3 days stay), inclusive of taxes and surcharges
Source: Centre for Asia Pacific Aviation and ITA Software
Fares data is © ITA Software and may not be copied or distributed without ITA's express permission.

Skymark Airlines plans to expand its fleet of B737s from 18 to 27 by Mar-2013 to support the new routes. The carrier has also ordered four A380s for international operations, with the carrier planning to offer services from Tokyo Narita to three European cities. The carrier will commence service to London from 2014 and plans to add Frankfurt and New York routes by FY2017.

Skymark selected Narita citing higher operating costs at the downtown Tokyo Haneda Airport. Both Narita and Haneda have busy schedules and some of the most expensive landing fees on the planet, let alone in Japan.

Haneda is plagued by a number of problems, including cross-subsidisation, high airport fees and a high level of government involvement. International services are 50-75% more expensive to operate than domestic services at the airport, with a lack of slots also a constraint. However, the airport has become a popular choice for business travellers. ANA, for example, has seen load factors averaging 85% at Haneda, exceeding their estimations by 5ppts. JAL has also stated that most of its services to Asia and China from Haneda are operating with load factors of around 90% and business traffic is high.

Meanwhile, Tokyo Narita is responding to market requirements, pursuing new business leads, seeking to double domestic routes to as many as 20 by FY2014 and conducing a study for attracting LCCs. The airport is forming plans related to the dedicated LCC terminal which could be operational by 2013. Narita Airport projects that approximately 10% of its landing and departure slots will eventually be used by budget carriers, up from less than 1%. The airport has also increased annual take-off and landing slots to 220,000 from Mar-2011 and an agreement is aiming to have 300,000 slots available by Mar-2015. The airport is also considering a significant relaxation of the curfew by an hour at each end of the day to 24:00-05:00.

The latest Skymark Airlines announcement again highlights the changing landscape in the Japanese market. The competitive environment has witnessed some notable changes in recent months with some fascinating dynamics at play. In addition to Skymark’s landmark A380 order, the Japanese market has witnessed the entry and growth of AirAsia, with ANA also expanding aggressively in the face of JAL’s cutbacks and difficulties. The market will also see the entry of an ANA-owned LCC JV in 2HFY2012 which will again alter the domestic aviation landscape.