On 12-Jun-2013, European Commission Transport VP, Siim Kallas, likened the Single European Sky (SES) to a mirage in the desert – “each time you get close, it seems to move further away”. Initiatives since the late 1990s, including two packages of EU rules (in 2004 and 2009), have so far failed to see SES fully implemented. On top of the EUR8.3 billion air navigation services fees, inefficiencies resulting from the fragmentation of European airspace cost airlines a further EUR4.6 billion in 2012.

A new package of EC proposals aims to reinvigorate the project, allowing for better safety oversight, strengthened performance monitoring, the opening to competition of air traffic management support services and a more flexible approach to the Functional Airspace Blocks (FABs). Airlines broadly welcomed the proposals, but called for greater urgency in their implementation.

Nevertheless, member state intransigence, rooted in the vested interests of labour and the revenue streams generated by national air traffic management bodies, may remain a significant brake on more rapid progress. The cost will be borne by the airlines, the public and the European economy.

European airspace is very inefficiently managed compared with the US

The United States controls a similar amount of airspace as Europe, with more traffic, at almost half the cost. A 2010 study commissioned jointly by Eurocontrol and the Federal Aviation Administration compared the two airspace regions: 11.5 million km² for Europe, 10.4 million km² for the US; 450 airports in Europe, 509 in the US. With very similar service levels, the US air traffic management (ATM) system manages two thirds more flights with 13% fewer air traffic controllers and 38% fewer staff in total. What’s more, the US has achieved this even before its own major overhaul to ATM in the form of its ‘Next Generation’ project.

Comparison of Air Traffic Management related Operational Performance in Europe and the USA: 2010

Functional Airspace Blocks to be reformed, even before they’ve been implemented

The core idea of the SES is to shift the design of air traffic management from national level to the EU level. National air traffic control organisations are supposed to work together in nine Functional Airspace Blocks (FABs) to gain efficiency, cut costs and reduce emissions. The Dec-2012 deadline for the full implementation of the FABs has not been met and the European Commission is currently examining infringement cases against all Member States. FABs are intended to replace the current patchwork of 27 national air traffic blocks. 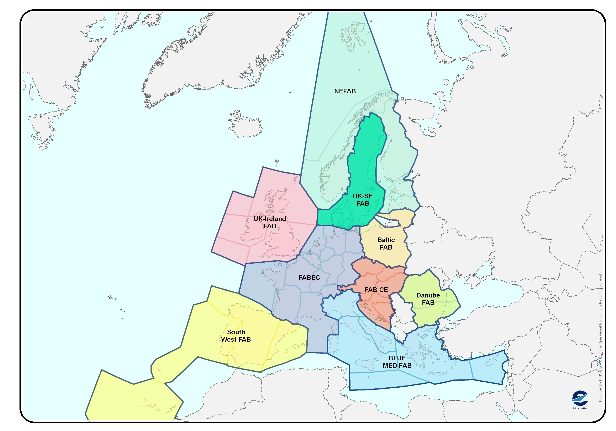 According to the European Commission, the FABs have become “exercises in administrative box ticking” rather than developing synergies. Under the Commission’s Jun-2013 package of proposals, known as Single European Sky 2+ (SES2+), it proposes to turn FABs into more flexible “industry partnerships”, which also allow participation in more than one FAB if they provide the necessary performance improvements. This is designed to ensure that their real focus is performance instead of simply being “political constructions”.

Unit costs of air navigation services are on a downward trend

In real terms, the unit cost of air navigation services (ANS) in Europe fell by 5% in 2011, but this is likely to have risen in 2012, according to Eurocontrol’s Performance Review Commission, which monitors performance of Europe’s ATM organisations. In 2011, the number of service units grew by 4.9%, but ANS costs fell by 0.4%.

A service unit is a measure of air traffic defined as the product of a distance factor and a weight factor (the distance factor relates to great circle distances between points and the weight factor is proportional to the square root of an aircraft's MTOW). The service unit is the basis of route charges levied by member states and air navigation service providers and by the ‘Network Manager’ Eurocontrol. Tariffs are set using a traffic forecast and a forecast of the provider’s cost base, with an adjustment applied on a two year delay. 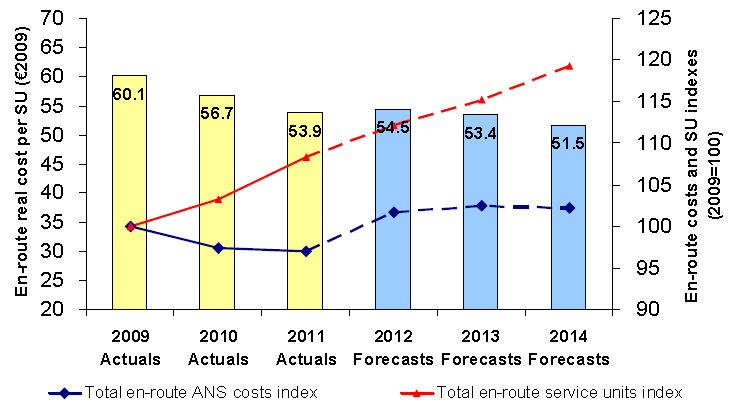 According to a report jointly published in Feb-2013 by IATA, AEA and ERA (A Blueprint for a Single European Sky), between 2004 and 2011, air navigation unit costs for en route services decreased by 15%, mainly due to the increase in traffic as the service units have increased in the same period by more than 30%. According to preliminary figures for 2012, en route costs were EUR6.8 billion, with terminal costs amounting to EUR1.5 billion, adding to a total of EUR8.3 billion in fees (source: Eurocontrol’s Performance Review Commission).

The decrease in unit costs is welcome news for airlines, but the total cost to airspace users of air navigation needs to include the cost of inefficiencies in the system. The joint IATA/AEA/ERA report of Feb-2013 notes that some progress has been made in flight efficiency but delays have significantly increased and were more than 30% higher in 2011 than in 2004 (and 60% above the targeted objective with an average of 1.6 minutes per flight).

According to the Performance Review Commission, inefficiencies relating to en route and airport delays and other inefficiencies arising from air navigation service provision cost a total of EUR4.6 billion in 2012. This figure is lower than the EUR5.2 billion in 2011, but is still a very significant additional burden to airlines on top of the EUR8.3 billion in user fees. 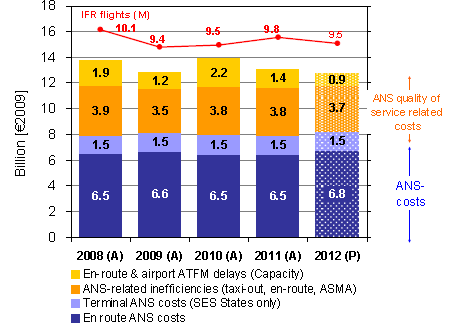 The Performance Review Commission has published data showing the development of gate-to-gate economic costs per composite flight hour between 2007 and 2011 for a sample of air navigation service providers. Between 2007 and 2010, the total cost per hour, including delay costs, increased by 2.3% in real terms, but it fell in 2011 due to a fall in delay costs per hour. Nevertheless, delay costs remained a significant part of the total and are much more volatile than service provision costs. 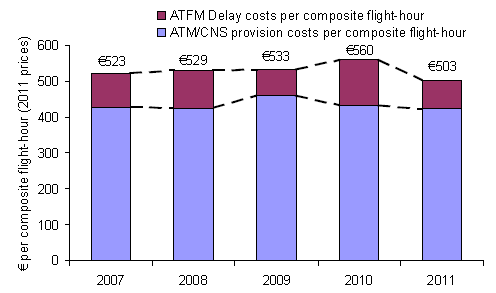 ATC capacity and staffing is main culprit for delays

The average en route delay per flight arising from Air Traffic Flow Management fell from two minutes in 2010 to 0.6 minutes in 2012. The most significant contributor to ATFM delays remains air traffic control capacity and staffing, just the kind of issues that SES is supposed to tackle.

Flights are more than 3% longer than they should be

One of the consequences of Europe’s fragmented airspace is that airlines cannot usually operate their aircraft on the most direct route between origin and destination. This leads to longer routes than would be the case if they were able to take the great circle trajectory. ‘Horizontal flight inefficiency’ is a measure of the extra distance flown relative to the great circle route.

The trend in this area is improving, but, in 2012, airlines in European airspace were still flying more than 3% further than necessary. The Commission puts this at an extra 42 kilometres for an average flight. This has significant implications for fuel burn, with consequences for the environment and airline financial performance, and for overall journey times. 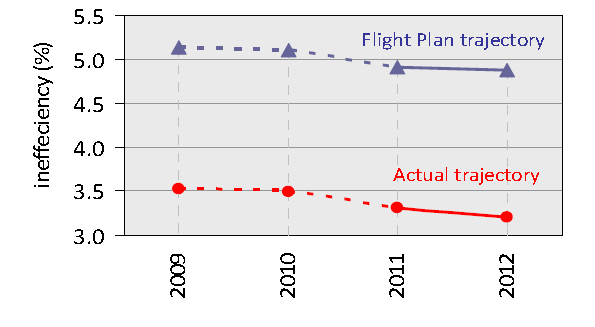 Support costs more than 70% of service provision costs; SES2+ will open to competition

Support costs are a major contributor to the costs of service provision. These consist of labour costs other than air traffic controllers, non-staff operating costs of capital-related costs. Comparison with the US indicates that the ratio of Air Traffic Control Officers (ATCOs) to additional staff in the U.S. is 1 to 1.4 whereas in Europe it is 1 to 2.4 (source: A Blueprint for a Single European Sky). The Performance Review Commission’s report for 2012 indicates that support costs in Europe were EUR295 in 2011, more than 70% of total service provision cost of around EUR400 per flight hour.

The European Commission is proposing to open up support services, such as meteorology, aeronautical information, communications, navigation or surveillance services, to competitive tender. Core air traffic control services are natural monopolies and will not be covered by the new rules. According to the commission, conservative estimates indicate that 20% savings can be expected from the introduction of normal public procurement rules. Certainly, as the biggest single category of cost, reform in this area should be expected to lead to material savings. 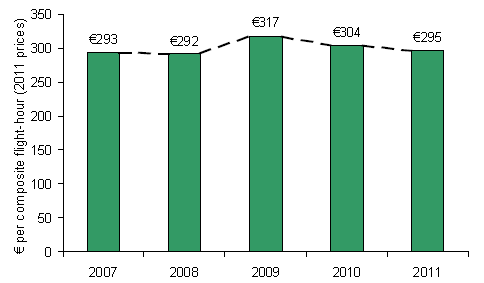 Safety is the number one priority for the industry and this is echoed by the European Commission in its new proposals. National Supervisory Authorities (NSAs) were created in 2004 to oversee the safety and performance of air traffic control, but the Commission has identified “serious shortcomings” in the independence of these authorities. In many cases the air traffic control organisations exercise direct control over the authority that is intended to oversee them.

SES2+ proposes separation of the authorities from the entities that they oversee and provides for a stable funding channel to ensure financial independence. It also provides for greater co-operation between authorities and exchanges of experts at EU-level.

In spite of the slow progress of SES and the inefficiencies in the system, Performance Review Commission data show that there was no accident with an ANS contribution in 2012. The preliminary data indicates that the number of total commercial air transport accidents reduced to the second lowest level over the past 10 years.

In addition to the SES2+ proposals concerning FABs, support services and safety that are noted above, the package contains changes to the role of the central Network Manager, the performance management process and the level of customer focus. The package must be approved by Member States and the European Parliament before becoming law.

The proposals seek to strengthen the role of the Network Manager (Eurocontrol), which performs certain tasks that are most efficiently carried out centrally, such as route design or co-ordination of radio frequencies. It is also responsible for co-ordination of the air traffic flows between the national service providers. The proposals could see the provision of a wider range of up to 10 new services such as information networks, monitoring of technical systems and airspace design by the Network Manager to air traffic control organisations. The services could be either provided centrally or outsourced by the Network Manager.

The benefits of full implementation of the Single European Sky 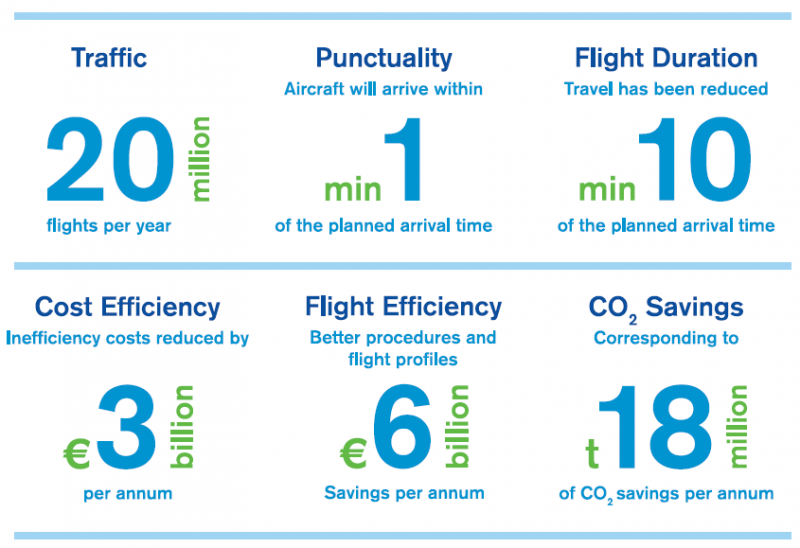 The Commission notes that “the delivery on performance targets has fallen significantly short of the overall level of ambition”. Under the current system, Member States have the ultimate say on targets and corrective measures. However, as either sole or majority owners of service providers, they often focus on the steady revenue streams flowing from air traffic control services and can be reluctant to facilitate progress towards a more integrated European airspace.

The Commission proposes to make target setting more independent, transparent and more enforceable and to strengthen its role versus member states in setting ambitious targets and in shortening the target setting process. It also proposes to increase the independence of the Performance Review Body and enable sanctions to be applied when targets are not met. In addition, the SES2+ proposals seek to introduce industry best practises into the legislation as regards customer consultation and the possibility for airspace user groups to sign off investment plans of the providers.

Europe must find a way to implement SES

Today, there are some nine million flights cross the European airspace and this has roughly doubled over the past 20 years. Eurocontrol forecasts a further 50% increase over the next 10-20 years. The goals of the Single European Sky include an improvement in safety by a factor of 10, a 10% reduction in aviation’s environmental impact, a 50% reduction in air traffic management costs and a three-fold increase in capacity. This is crucial if Europe wants to keep pace with forecast growth in aviation.

The governments of France and Germany have spoken out against the SES2+ package. In spite of this and industrial action by air traffic controllers, who are worried that a more efficient system may threaten their jobs, European member states must find a way to implement the Single European Sky.