Singapore Airlines (SIA) will launch services from Jakarta to Sydney in Nov-2016, resulting in new competition for rivals Garuda Indonesia and Australia’s Qantas Airways. SIA’s entrance on the Jakarta-Sydney route is a strategic move and highlights its desire to pursue new areas of growth.

The Indonesia-Australia market is a logical market for SIA as it seeks to diversify its business. Indonesia and Australia are already SIA’s two largest international markets and Garuda and Qantas are already among its biggest competitors.

Competition within Asia Pacific, including the Southeast Asia-Australia market, has been intensifying. In the current highly competitive and challenging environment airlines are constantly jockeying and exploring new options to improve their position.

Australia and Indonesia account for one quarter of SIA’s capacity

On 28-Sep-2016 Singapore Airlines (SIA) announced plans to launch thrice weekly services from Jakarta to Sydney on 23-Nov-2016. At the same time SIA is boosting Singapore-Jakarta from 63 to 74 weekly flights, with three of the additional 11 frequencies continuing to Sydney.

SIA has a strong presence in both Indonesia and Australia, which it should be able to leverage with the new fifth freedom route between the two countries. Australia and Indonesia are SIA’s two largest international markets and combined they account for over 25% of the parent airline’s weekly seat capacity. 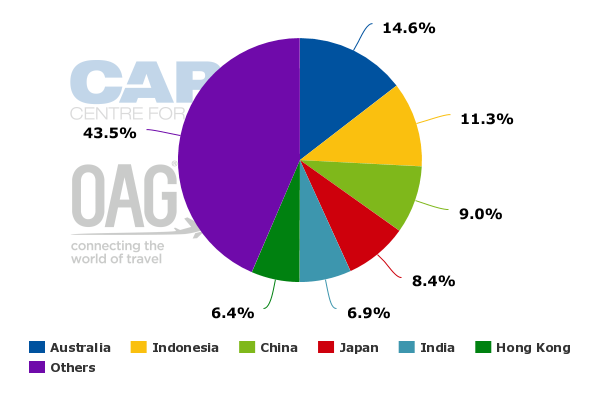 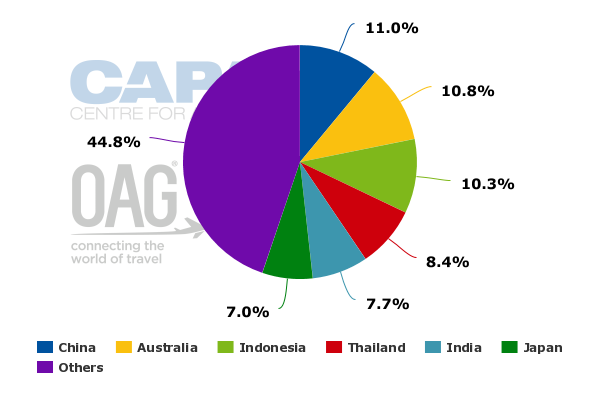 SIA is the main brand in both markets, accounting for 78% of the group’s seat capacity in Australia and 64% in Indonesia. SIA serves all the primary destinations in Australia and Indonesia – with significant frequency in most cases – while SilkAir serves the secondary markets.

Singapore-Jakarta is SIA’s largest route based on both number of frequencies and total seat capacity. Jakarta is an important market for SIA, and SIA has historically mounted additional flights to Jakarta as soon as it can secure additional slots.

SIA currently has nine daily flights to Jakarta and is boosting capacity on Singapore-Jakarta by approximately another 15% in late Nov-2016 as it adds another 11 weekly frequencies. Three of these frequencies will continue to Sydney, but virtually all the additional Singapore-Jakarta capacity will be allocated to the local market. SIA already has 31 weekly nonstop Singapore-Sydney flights – making it unlikely that it will carry significant one-stop traffic from Singapore to Sydney.

Sydney is SIA’s fourth, fifth or sixth largest route depending on the time of year. SIA typically adds capacity to Sydney during the peak southern summer months. SIA also operates freighters to both Sydney and Jakarta. 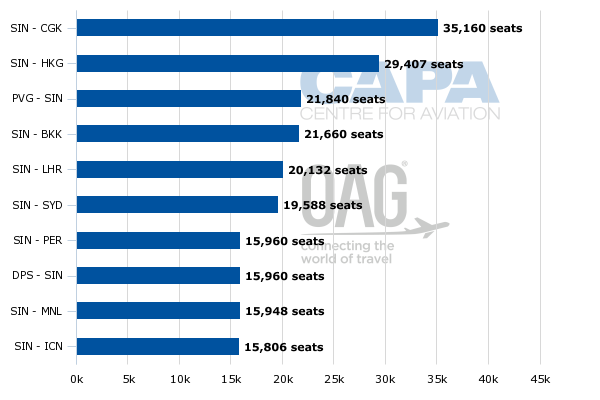 SIA further improves its position in the Indonesian market

In Indonesia SIA has a strong brand and has historically carried a large share of its Indonesian passengers beyond Singapore to destinations throughout Asia and Europe. SIA is the largest foreign full service airline in Indonesia.

SIA and SilkAir combined account for 16% of FSC international capacity in Indonesia, putting the duo not far behind the Indonesian flag carrier Garuda, which has a 24% share. 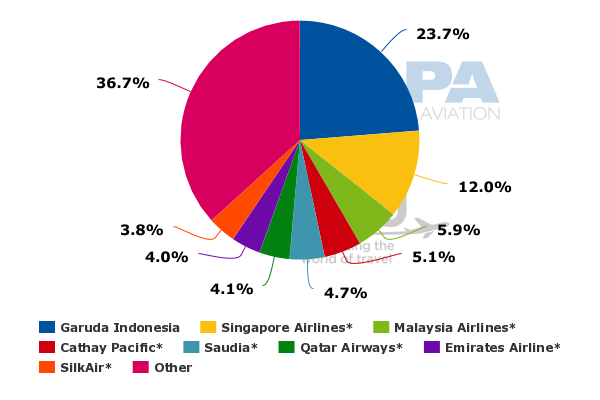 SIA already carries a relatively significant amount of traffic from Indonesia to Australia, including from Jakarta to Sydney. However, its current one-stop product in the Jakarta-Sydney market is not convenient from a total transit time perspective because backtracking is required.

Offering a nonstop option from Jakarta to Sydney will significantly increase SIA’s share in the Indonesia-Australia market and will sway more of its Indonesian customers to use SIA when flying to Australia, which is one of the most popular destinations for Indonesians. In Sydney domestic connections are available on SIA's partner Virgin Australia.

SIA is the second largest foreign airline in Australia after Emirates. SIA has approximately a 9% share of international FSC capacity in Australia – behind Qantas’ 19% share and Emirates’ 12% share, and slightly ahead of Virgin Australia’s 8% share. 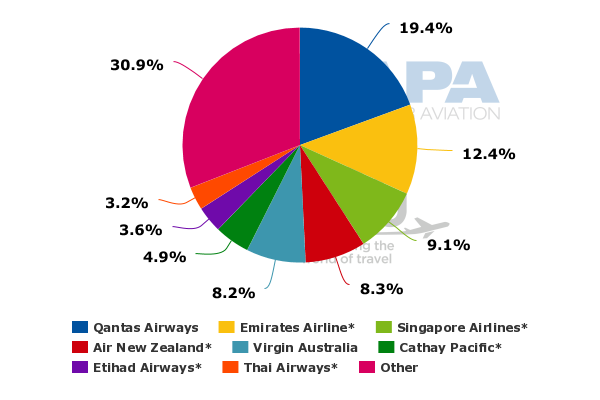 The new Jakarta-Sydney flights are part of an overall initiative by SIA to bolster its position in the strategically important Australia market. SIA launched flights to Canberra on 20-Sep-2016, giving the parent airline six destinations in Australia and 126 weekly return passenger flights.

Jakarta-Sydney is an attractive under-served route

As is the case with Indonesia, SIA offers its Australian customers convenient connections beyond Singapore to destinations throughout Asia and Europe. However Indonesia is an exception, as it requires backtracking.

SIA is not likely to be interested in fifth freedom routes from Bali to Australia as it is an intensely competitive, and predominantly price-sensitive, leisure market. SIA's partner Virgin Australia is also already competing in the Bali-Australia market.

In 2015 the Jakarta-Sydney nonstop route generated 152,000 passengers, according to Australia BITRE data. Qantas had an average load factor of 80% on Jakarta-Sydney in 2015 and accounted for approximately 56% of the total nonstop traffic. The BITRE data excludes one-stop passengers; a relatively large share of Jakarta-Sydney traffic transits in Bali or Singapore.

Qantas and Garuda currently deploy two-class A330-200s on Jakarta-Singapore. SIA will use two-class 777-200ERs retrofitted with lie-flat business seats, which have slightly more capacity than the A330-200s used by Garuda and Qantas.

Garuda and Qantas are both rivals of SIA. SIA strategically may feel compelled to compete against Garuda and Qantas on Jakarta-Sydney, since both airlines are aggressive competitors in SIA’s home market of Singapore.

Garuda has been growing its Singapore operation – launching flights from Singapore to London Heathrow and Medan in 1H2016. Garuda also started adding a stop in Singapore on some of its Amsterdam flights in 2015. Jakarta-Singapore is Garuda’s largest international route. Garuda also links Singapore with Bali and Surabaya.

Qantas is now the sixth largest foreign FSC in Singapore. Garuda is the third largest, behind only Emirates and Cathay Pacific.

Jetstar has expanded in the Bali market in recent years, taking up nearly all the remaining available capacity in the Australia-Indonesia bilateral. The bilateral limits capacity at the four main Australian gateways of Brisbane, Melbourne, Perth and Sydney. There are no restrictions at Australia's secondary gateways.

Garuda has reduced its Australian presence, opening an opportunity

Indonesian airlines still have available capacity in the Indonesia-Australia bilateral to add services to the main Australian points, including Sydney. However, Garuda has not been keen to expand in Australia since reducing capacity in early 2015. As part of a broader international restructuring, Garuda dropped Bali-Brisbane in early 2015 and reduced capacity on other Australian routes, including Jakarta-Sydney from five to four weekly flights.

However, Garuda needs to be cautious as its international operation has been highly unprofitable in 2016. Competing against SIA is always challenging – particularly for premium passengers.

A Garuda response may not be necessary – at least for the time being – as SIA is only initially operating three weekly frequencies on Jakarta-Sydney. SIA could be using the initial three weekly flights to test the market.

Slot constraints currently make it difficult to operate the new route daily. However, SIA will obviously need to monitor the slot situation at both Jakarta and Sydney.

Launching Jakarta-Sydney is a bold move for the normally conservative SIA.

Commencing the service with a lead time of only two months is also very unusual for SIA. For its recently launched Singapore-Canberra-Wellington service SIA had a lead time of nine months, giving it ample time to market the new route.

However, launching three weekly flights between two markets where SIA already has a strong presence does significantly reduce the risk profile. SIA needs to find new areas of growth, and Jakarta-Sydney is a logical route.

The strategic ramifications are potentially much larger than the service itself. By launching fifth freedom flights from Jakarta to Sydney SIA is sending a strong message to two of its largest competitors.

All of SIA’s rivals will need to pay attention as SIA ponders other new routes, both from Singapore and elsewhere, in its new drive for growth and diversification. It is being driven to become more innovative - and take on a little more risk - because of the battering it has taken from the combination of the Gulf carriers and regional LCCs. SIA is now in a better position than previously, with its new group structure, enabling it some flexibility in segmenting markets.