Once the more than USD100 million narrowbody retrofit programme is complete, SIA will have the distinction of offering lie-flat business class seats across the group's full service fleet. Earlier this year SIA announced the introduction of lie-flat business class seats on its regional widebody fleet as new 787-10s and regional A350-900s are delivered to replace A330-300s and older 777 variants, which are fitted with an outdated angled flat product.

SIA Group’s decision to upgrade its full service narrowbody product is sensible, given the large – and growing – product gap between the SilkAir narrowbody and Singapore Airlines' widebody fleets. Competitors have also been improving their narrowbody product, forcing SIA to make a move.

Meanwhile, the absorption of SilkAir into SIA should enable the group to reduce costs and improve efficiency as the number of operator's certificates, which just a year ago stood at five, is reduced to only two. The SIA Group has already merged the short haul LCC Tigerair with the long haul LCC Scoot and folded SIA Cargo back into SIA; the folding of SilkAir into SIA was inevitable.

On 18-May-2018 SIA announced that SilkAir will undertake “a significant investment programme to upgrade its cabin products as part of a multi-year initiative that will ultimately see it merged into SIA”.

In 2020 the group expects the first SilkAir aircraft to be retrofitted with lie-flat seats in business and seatback IFE systems in both business and economy. The retrofit programme is expected to take several years to complete.

SilkAir will merge into SIA at some point during the retrofit programme. SIA will determine a merger date later, and stated that the merger would only occur once a “sufficient number of aircraft have been fitted with the new cabin products”. During its FY2018 results briefing on 18-May-2018, SIA declined to elaborate what would constitute a sufficient number of aircraft.

SIA Group CEO Goh Choon Phong stressed during the results briefing that the merger with SilkAir should not be considered a consolidation exercise. “This is really an exercise to ensure we have even greater seamless connectivity between widebody and narrowbody”, he said. “With this integration we do believe there will be greater opportunities for the group to grow further.”

SilkAir has doubled in size since 2009

SilkAir and SIA have already pursued significant integration in recent years, resulting in more commercial and network collaboration. The two airlines now operate side by side on 10 routes. SilkAir has also fully taken over several SIA routes in recent years.

Transitioning to a single brand will make for a more seamless experience, particularly for connecting passengers. While SilkAir has developed a relatively strong brand regionally in Asia Pacific, it is not known in Europe or North America – which are important markets for SIA.

Folding SilkAir into SIA will also significantly improve Star Alliance’s network in Southeast Asia. SIA has always kept SilkAir outside Star, which has been somewhat controversial as several Star members are keen to access secondary destinations in Asia that are served by SilkAir but not SIA. SilkAir currently has 40 destinations that are not also served SIA; approximately half of these are not currently served by any Star members. 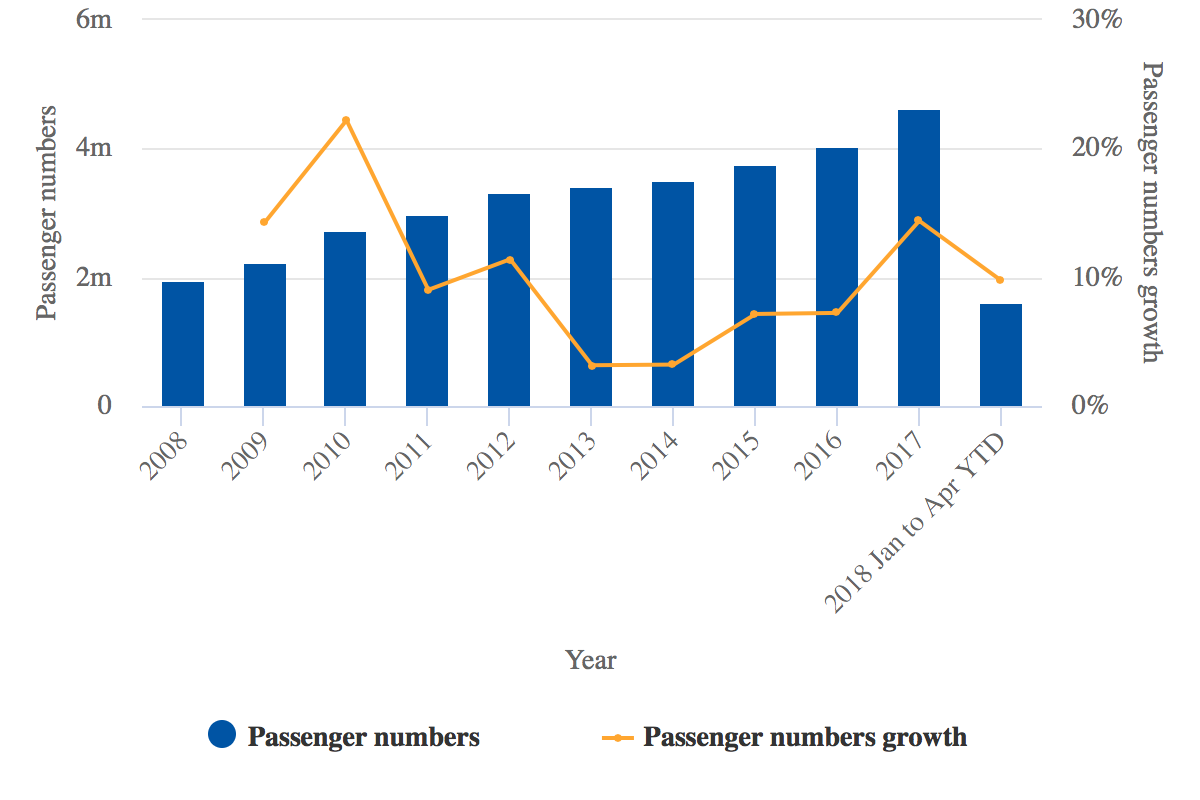 SIA the parent airline carried 19.5 million passengers in FY2018, compared to 16.7 million passengers in FY2011. SIA is the largest international airline in Southeast Asia based on current seat capacity. SilkAir is one quarter the size of SIA but is also a relatively significant player; SilkAir is currently the seventh largest Southeast Asian full service airline, based on international seat capacity.

SilkAir has been consistently profitable, reporting operating profits for 17 consecutive years. Its ability to maintain profitability despite intensifying competition from LCCs, which now account for over half of total seat capacity within Southeast Asia, is an indication that SilkAir has been highly successful under its current full service feeder model.

SIA’s decision to fold SilkAir into SIA therefore should not be viewed in any way as a response to SilkAir struggling to compete. It should instead be viewed as a sensible decision to improve the group’s long term position.

If anything, SilkAir should have pursued product upgrades and a rebranding, or merger with SIA, sooner. An earlier decision would have enabled the group to introduce product improvements with the introduction of the 737 MAX 8 in late 2017, enabling the group to avoid spending millions in retrofitting practically new aircraft. However, making a move now and committing to narrowbody product improvements early next decade, along with a merger, is an example of the saying “better late than never”.

SilkAir currently operates 34 aircraft, 22 of which will be retrofitted

SIA has been an all-widebody operator since it phased out the 727 in the mid-1980s. In 1989 the group resumed scheduled narrowbody flights under the subsidiary Tradewinds, which became SilkAir in 1992.

SilkAir plans to phase out one more A319 and one more A320 in FY2019, resulting in a fleet of 33 aircraft. Although SilkAir’s fleet is increasing by only one aircraft in FY2019 (and is actually decreasing over the last 11 months of the fiscal year), the airline is projecting 9% ASK growth for the year as frequencies are added on several existing routes.

The SIA Group does not provide aircraft delivery dates beyond the current fiscal year. However, it would be sensible for the group to delay delivery of additional 737 MAX 8s (starting with the seventh aircraft) until the new lie-flat business class seat is ready, since each retrofit is expected to cost more than USD4 million.

The SIA Group expects it will be about two years until its narrowbody lie-flat business class seat is ready, due to the current long lead times from seat suppliers. SIA has not yet selected a seat and is talking to several potential suppliers.

While there are significant backlogs at all the main suppliers, SIA also typically opts to customise its business class seats, resulting in even longer lead times than seats that are acquired off the shelf.

“One reason why we have decided at this point in time to do this particular exercise is because we are seeing the availability of lie-flat seats which are much more space efficient is now in the market...Therefore we are able to make use of that ability to do the configuration without having to compromise too much on the reduction in the number of seats”, Mr Goh said.

Mr Goh also pointed out that business class demand on SilkAir regional routes had been healthy, and the group is therefore confident that there is sufficient demand for a narrowbody lie-flat product. “The load factors are not low at all”, Mr Goh said.

Given the efficient design of new generation lie-flat narrowbody seats, the SIA Group should be able to maintain a business class cabin of 12 seats on the 737 MAX 8 without a significant reduction in economy class capacity. At most, one additional row of economy may have to be removed to accommodate 12 lie-flat business class seats. At most two economy class rows on the 737-800 would have to be removed, given that the 737-800 currently has a tighter pitch. 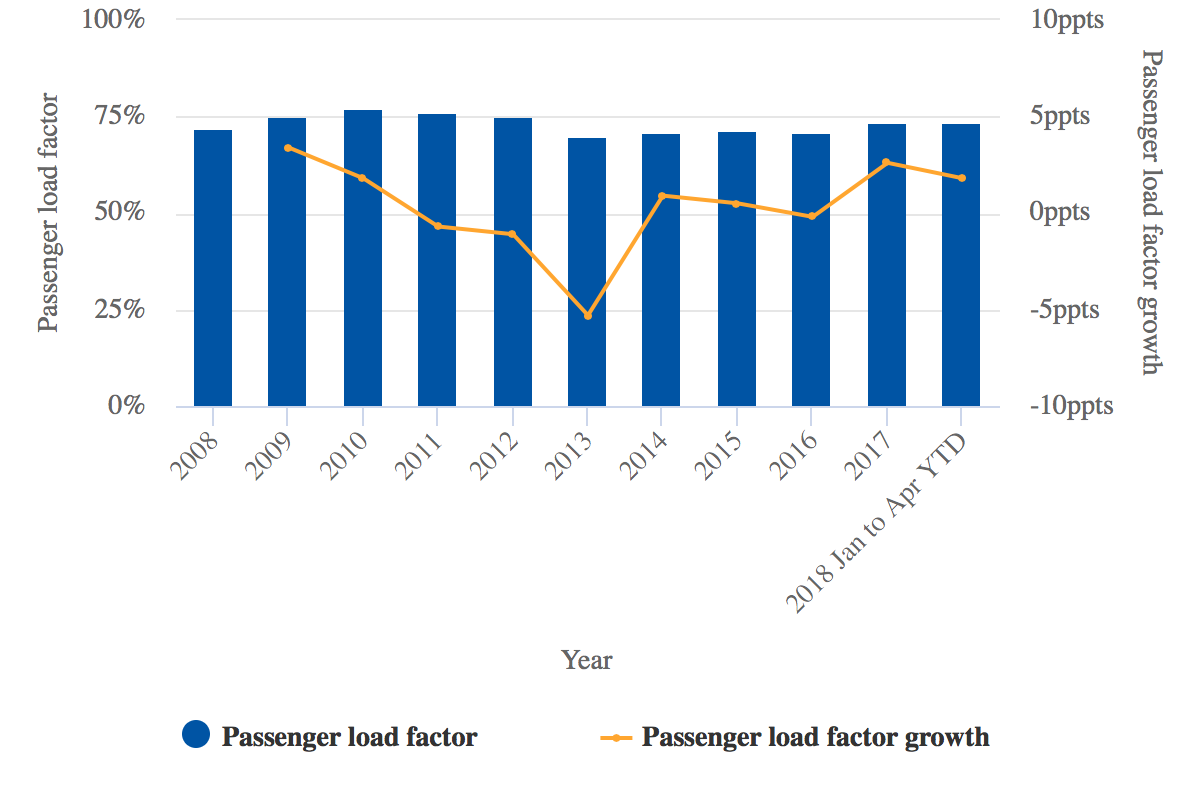 The SIA Group currently has commitments for 32 737 MAX 8s. Trading up to the 737 MAX 9 or MAX 10 for some of these aircraft is likely, given the current large gap between SIA’s largest widebody aircraft and SilkAir’s largest narrowbody aircraft. SIA the parent airline is upgauging regional routes as it introduces 337-seat 787-10s, which further widens this gap and makes the business case for larger narrowbody aircraft more obvious.

The group may have initially been reluctant to have SilkAir operate larger narrowbody aircraft because of its weaker product. The SIA-SilkAir merger and introduction of lie-flat narrowbody business class seats eliminate this potential concern.

Large narrowbody aircraft under the SIA brand would be an ideal solution for thick regional routes to slot constrained airports and would enable SIA to reduce the unit costs of its narrowbody operation.

Philippine Airlines will become the first airline in Southeast Asia to offer a narrowbody lie-flat business product in Jun-2018, when it puts its first A321neo into service. PAL is configuring its A321neos with 12 lie-flat business class and 156 economy class seats.

More airlines in Asia will inevitably opt to introduce lie-flat business class seats in narrowbody aircraft, joining a global trend which has so far been more pronounced in other regions. SIA had to make a move in order to be competitive in the narrowbody segment.

Folding SilkAir into SIA has also seemed inevitable for some time. CAPA stated in a Jan-2017 report that: “Following the completion of the Scoot-Tigerair merger a reduction in the number of full service brands would be logical. Folding SilkAir, which has been around for 28 years, into Singapore Airlines would be a much more difficult and relatively drastic decision, but would not be unfathomable”.

In a Oct-2017 report CAPA stated that the need to upgrade the SilkAir product had become more critical, leading to a potential merger with SIA, due to SIA’s decision to introduce a new lie-flat regional product with the 787-10.

At the time, CAPA stated: “SilkAir has started taking delivery of new 737 MAX 8 aircraft, providing an opportunity to deploy highly efficient new generation narrowbody aircraft on longer medium haul routes – both new routes and those now served with SIA’s all-widebody fleet. SilkAir has so far elected only to pursue modest upgrades of its inflight product with the 737 MAX, but will likely consider more significant upgrades and a rebranding or merger with the parent airline as part of an overall SIA Group review."

“SilkAir could potentially offer lie-flat business class seats on a new sub-fleet and use the same product SIA will be introducing in 2018 on its new fleet of 787-10s. SIA is planning a significant improvement to its regional premium product as the new two class 787-10s replace two class A330-300s and older model 777s on short/medium haul routes.”

SIA currently still has 34 aircraft with angled flat seats, according to the CAPA Fleet Database. SIA is expected to complete the transition to an all lie-flat widebody fleet within five years.

The new retrofit programme for the 737 fleet will mean SIA will also have an all lie-flat product on its future narrowbody fleet. This is an impressive achievement, although perhaps unnecessary given that a majority of SilkAir’s routes are less than four hours.

As SIA’s regional fleet is mainly used on medium haul routes of four to eight hours, the decision to transition to an all lie-flat product is more obvious than it is for the SilkAir narrowbody fleet. However, the group has concluded that offering a consistent product across both the widebody and narrowbody fleets is important, even if most of its narrowbody services are short haul. The group believes it does not make sense to have a subfleet without the lie-flat product. Such a subfleet, in addition to resulting in product inconsistencies, would make aircraft rotation and scheduling more complicated.

SIA will likely become the first airline in the world offering lie-flat business class products across all narrowbody and widebody aircraft. SIA is often a trendsetter and other airlines will surely take note of SIA’s unprecedented narrowbody product commitment.