Sichuan Airlines, China's fifth carrier to offer international long-haul services, will increase its presence in Australia with a new twice-weekly Chongqing-Sydney service launching 20-Dec-2013 with A330s. The route complements Sichuan's existing Chengdu-Melbourne service and will more easily allow passengers to visit Australia's two largest cities. Short connecting flights between Chengdu and Chongqing will complete the loop. The service will further expand the massive influx of Chinese capacity Australia has seen in recent years, including China Southern's A380 deployment to Sydney in Oct-2013.

Yet to be realised are Sichuan's bold plans to grow in Europe and North America. While the carrier's largest shareholder is the Sichuan government, all three of China's main airlines – Air China, China Eastern and China Southern – own a stake in Sichuan Airlines, complicating its aspirations. Slower growth may be wise: the Chengdu-Melbourne service in its first five months averaged only a 45% load factor. While China's secondary and western cities have geographical advantages for European services, for Australia it will be some time before they mature. This is not helped by the fact that Sichuan does not have an English language website.

Sichuan Airlines will launch twice-weekly A330 Chongqing-Sydney service on 20-Dec-2013. The route follows the carrier's first long-haul intercontinental flight, Chengdu-Shenyang-Vancouver and second route, Chengdu-Melbourne. Chengdu, the capital of Sichuan province, is Sichuan Airlines' largest hub. The second, with half the capacity of Chengdu, is Chongqing. 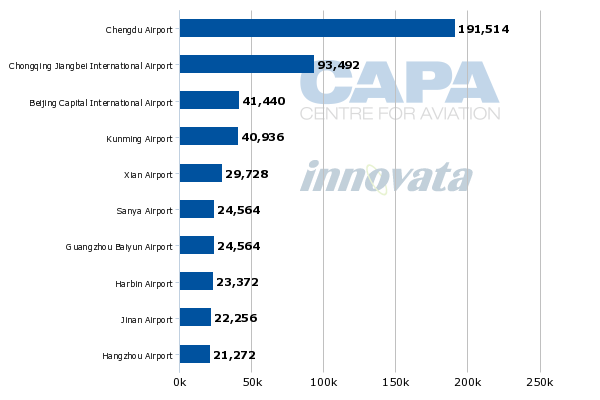 While it may seem odd to launch the Sydney route from Chongqing instead of Chengdu, the Chongqing government is subsidising the route to an unspecified sum. Chongqing is about 280km away from Chengdu and is a municipality that is not part of Sichuan province. So not only is there Chengdu-Chongqing rivalry at play, but China's secondary cities are racing to catch up to their more mature counterparts primarily along the coast: Beijing, Guangzhou and Shanghai.

There is a desire to emulate them, at the local level and national as China's central government has a "go west" campaign to economically develop the areas around Chengdu and Chongqing, and elsewhere. But these areas are still significantly younger than Beijing and Shanghai. Business demand is lower, as are salaries. The basic conditions for unsubsidised intercontinental routes from such cities is largely absent.

But long-haul routes and other signs of internationalisation are warmly welcomed by local officials who are ultimately trying to impress their superiors and are jockeying for a promotion, perhaps to over-simplify the matter. So such long-haul routes develop even though there are little economic gains to China as most spending occurs overseas.

Sichuan Airlines will benefit from having a second destination to sell in Australia. Air China and China Eastern serve two cities (Melbourne and Sydney while China Eastern suspended Cairns in Aug-2013) while China Southern serves four (Brisbane, Melbourne, Perth and Sydney). This allows Chinese passengers – who comprise the vast majority of the market – to visit multiple Australian destinations. There are, as of Oct-2013, no passenger flights between Chengdu and Chongqing given the short distance, but GDS filings indicate Sichuan Airlines will operate tag Chengdu-Chongqing flights on the A330 for the Sydney service.

Chengdu-Melbourne has struggled with a collective 45% load factor

Sichuan Airlines is launching Chongqing-Sydney well before its Chengdu-Melbourne approaches any level of maturity. Chengdu-Melbourne started in 28-Feb-2013 with three weekly flights but BITRE only started recording data from Mar-2013. In the five months of available data, Sichuan's average Chengdu-Melbourne load factor has been 45%. The worst performance was in May-2013 when Sichuan recorded a 33% load factor, down from the 41% in Mar-2013 and 49% in Apr-2013. Performance rebounded in Jun-2013, with Sichuan's best month of performance occurring in Jul-2013, the most recent month of available data. But even then the Jul-2013 load factor was only 64%.

In Jun-2013 Sichuan carried 100 fewer passengers (1,800) but with only nine flights. Although traffic inbound to the region from Australia would be limited, the preclusion of an English version of Sichuan's website very quickly reduces the opportunity for foreigners to book – or even learn about – Sichuan Airlines. 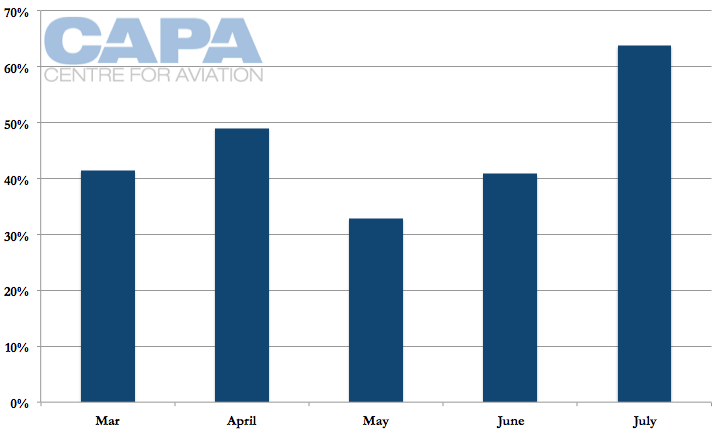 Sichuan Airlines during the launch period said it expected to carry 70,000 passengers per annum. However, having only flown 12,000 passengers in five months (with reduced capacity), this 70,000 goal has become unrealistic.

A spot check on fares in Nov-2013 for Chengdu-Melbourne lists fares for RMB6157 (USD1010) on Sichuan Airlines. China Southern – whose route via Guangzhou is only 1% longer distance – is cheaper at RMB5535 (USD908) but with a long layover.

Fares are likely substantially lower for passengers booking from a travel agency or as part of a group. Some have observed fares in the USD500 range.

Higher fares for a non-stop flight are of course to be expected, but it was not possible to check Sichuan's connecting fares, such as from Xi'an, to see how Sichuan compares to China Southern. But Sichuan is disadvantaged in the Australian market as its Chengdu hub does not have as ideal geography as Guangzhou or Shanghai for routing traffic from around China.

Sichuan's geography is better – but not necessarily advantageous – for the central and western areas, which have lower demand and wealth.

Flight path from Chengdu to Melbourne, non-stop and via Guangzhou

Due to performance limitations of Sichuan's sole long-haul aircraft type, the A330, the Chengdu-Vancouver service routes via Shenyang in China's northeast. Canada does not release data similar to Australia's, so performance results are unavailable. However, Sichuan has regularly adjusted capacity. From 28-Oct-2012 through 14-Dec-2012 it reduced service from three weekly to two weekly, and did so again from 07-Apr-2013 to 07-Jun-2013 and from 07-Oct-2013 to 14-Dec-2013. It plans to reduce capacity again from 18-Feb-2014 to 13-Jun-2014, largely indicating strong capacity over China's limited holiday/leisure periods.

The frequency changes indicate not just sharp swings in demand but that Sichuan is willing and capable to adjust its schedule - whereas in the past carriers around the world have typically maintained service year-round with limited changes. While the capacity changes reflect some weakness in the route, they also reflect strength in Sichuan Airlines' ability to detect and respond to this. 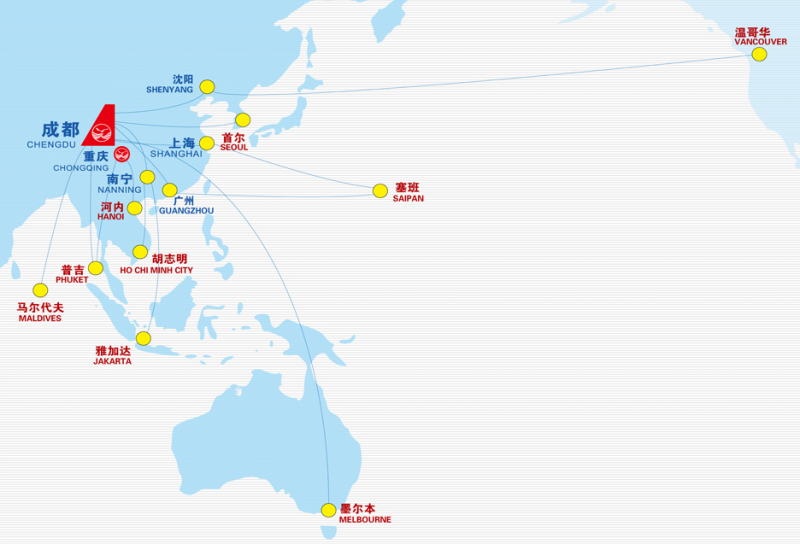 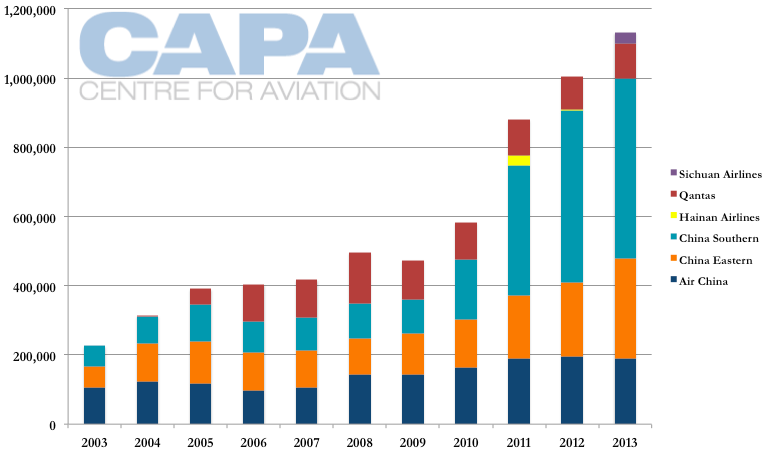 Its most recent growth in Australia has been deploying the A380 between Guangzhou and Sydney, but this underscores the yield pressure all airlines face, not just in the Australia-China market but wherever the Chinese carriers fly, offering lucrative sixth freedom fares and drawing concern – and complaint – from competitors.

Tourism authorities are generally enthralled, especially in Australia, where genuine and large efforts are underway to make the country accessible to Chinese visitors. In the state of Victoria, home to Melbourne, Chinese visitors in 2011 overtook those from New Zealand (always until now the largest inbound market) as being the single largest visitor source.

Sichuan Airlines expected to be able to launch a Chengdu-Paris service in Jun-2013 - with the potential to allow sixth freedom operations - and has spoken of more North American expansion. However these services have not yet eventuated. The objectives of the Sichuan government, the carrier's largest shareholder, have to be balanced against Air China, China Eastern and China Southern, each of which has its own goals. Although ultimately the carriers are all state-owned, they are exceptionally competitive with each other and have to meet central government performance targets. They are far from functioning as a single entity; for all intents and purposes they are separate airlines.

The ownership challenge is compounded by a lack of long-haul aircraft. Acquisition of those is approved by the central government, so again the ownership factor is at play. But bringing in widebody aircraft presents the opportunity to use them on trunk routes where airspace and slots are constrained. Growth sometimes can only occur through up-gauging and this can be handsomely profitable – but not during all periods of the year, creating the need to balance domestic and international flights. International services bring pride while domestic brings profits, or at least should: Sichuan Airlines was loss-making in 1H2013.

North America is a lucrative market for all North Asian carriers and Sichuan would surely like a larger share, although it would need to continue to work around the disadvantageous location of its base. Europe is interesting given the potential to route traffic from around the country in a western hub, creating – in some instances – more efficient connections than relying on Beijing, Guangzhou and Beijing. But this then comes into conflict with the carriers based in China's traditional hubs.

Sichuan Airlines is not in an enviable position. Its growth is constrained both by competitors and its hub being in an economically developing region. They may be a population pool in the tens of millions, but travel propensity is still low. Perhaps, given Sichuan's weak Chengdu-Melbourne performance and limited impact on other carriers, Chongqing-Sydney services became an easier approval.

But even then the lesson from Chengdu-Melbourne is that secondary Chinese cities are still waiting for their time to come. None has a daily long-haul flight yet. Subsidies and incentives are very common. Some foreign airlines speculate it may be years – or a decade – before secondary cities can sustain traffic seen in Beijing and Shanghai.

While some airlines are making that prediction and limiting their footprint in secondary markets, Chinese carriers will continue to develop those markets. The question for foreign carriers is how they adapt to that, obviously not wanting to match unprofitable capacity deployment.

Responses so far have been muted but no doubt there will eventually be complaints, repeating what some carriers did over the growth of Gulf carriers. But that will largely be counter productive. Governments will be more fearful of offending China than a Gulf state.

Meanwhile, airlines like Sichuan will be learning the special needs of foreign market operations; assuming their medium term survival on the routes, this will position them well for expansion as their network builds. One immediate move might be to establish an English language website.