US airline stocks have eased as oil prices firmed in early trading this week. WTI finished trading on Monday at USD102.55 per barrel for June delivery, after slipping below USD100 per barrel late last week, prompting a rally in airline shares.

US Airways led the falls, down 3.8%, while Delta, American Airlines and Allegiant all lost more than 3%. Latin American carriers did not escape unharmed, with GOL down 2.7%.

Also in Latin America, LAN Airlines and Copa Airlines have reported exceptionally strong Apr-2011 traffic, thanks to the late Easter holiday period, as well as the general recovery in passenger traffic. At the same time, both carriers are continuing to strongly increase capacity.

Copa Holdings reported a 27.2% increase in revenue passenger miles (RPMs), with international RPKs surging 30.2% and domestic RPMS up 2.2%. Capacity rose 23.9% across the carrier's markets, up 27.4% in international markets but down 2.1% domestically.

Copa shares traded down just 0.1%, while LAN was the day's only positive performer, gaining 0.5% 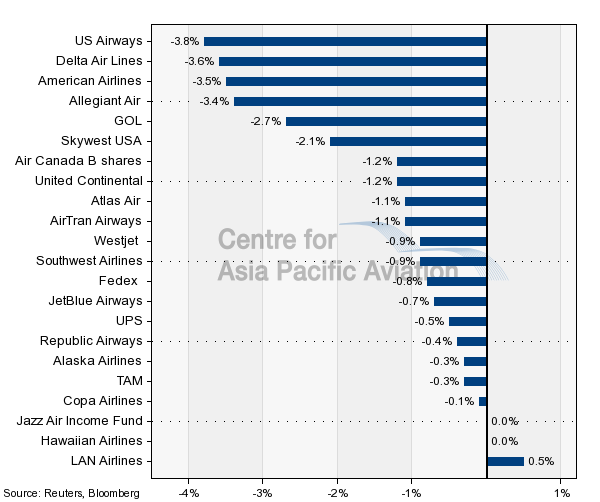