Seychelles reworks a 50-year plan for its international airport; private sector could contribute

Early in the COVID-19 pandemic in 2020 CAPA reported how island and island groups around the world were at risk of a greater impact from it, along with their airports and the tourist visits they usually handle.

As it happens, the Seychelles, in the Indian Ocean and regarded as an upmarket vacation destination, haven’t fared too badly, and tourist numbers are rising again rapidly.

Now the government has dug up a 2009 master plan which had not been implemented, to give it a shake-up appropriate to the changed circumstances of the past two years.

A new international terminal building is the cornerstone of the development, and for the first time the private sector could play a part in financing it.

Seychelles' Minister of Transport Antony Derjacques said recently that the government would review the master plan for Seychelles International Airport.

The updated plan "will take care of the people for the coming 50 years", he added. The revised plan is expected to include a new terminal, duty free retail area and fixed base operation. The project will be undertaken in cooperation with a private partner.

50 years is a long master plan period for any airport, but the authorities in this instance can be congratulated for anticipating that the nature of tourism – on which the islands are highly dependent – is changing, and will continue to change.

Also known as Aéroport de la Pointe Larue, Seychelles International Airport was officially opened in Mar-1972 and is the hub for Air Seychelles, serving Mahé Island and the capital Victoria. The airport typically offers connections to a number of international destinations, with airlines that include Air Seychelles, Emirates, Etihad Airways and Kenya Airways. The airport is operated by the Seychelles Aviation Authority.

According to the CAPA Airport Construction Database: the last construction works at the airport, which concluded in 2019 and which came at a total price of USD150 million, included a new and larger domestic terminal building.

Before that, in 2016, the airport expanded its lounge area by over 800sqm amid a +11% year-on-year increase in tourist arrivals in the first quarter of the year.

There are several conflicting influences at play in the future development of the airport.

The first is tourism, which is a mainstay of the national economy, accounting for up to 25% of GDP in some years before the pandemic and one that must remain competitive in the long run.

As well as ensuring that its own infrastructure is up to date, the country is in stiff competition with Mauritius (in particular) for upmarket tourism, and to a lesser degree with Comoros and Madagascar and the wider Indian Ocean as a whole – especially the Maldives and Kenyan beach resorts. So, the Seychelles must be aware of developments there so it can anticipate shifting tourism mores.

Location of the Seychelles vs. competing tourist destinations 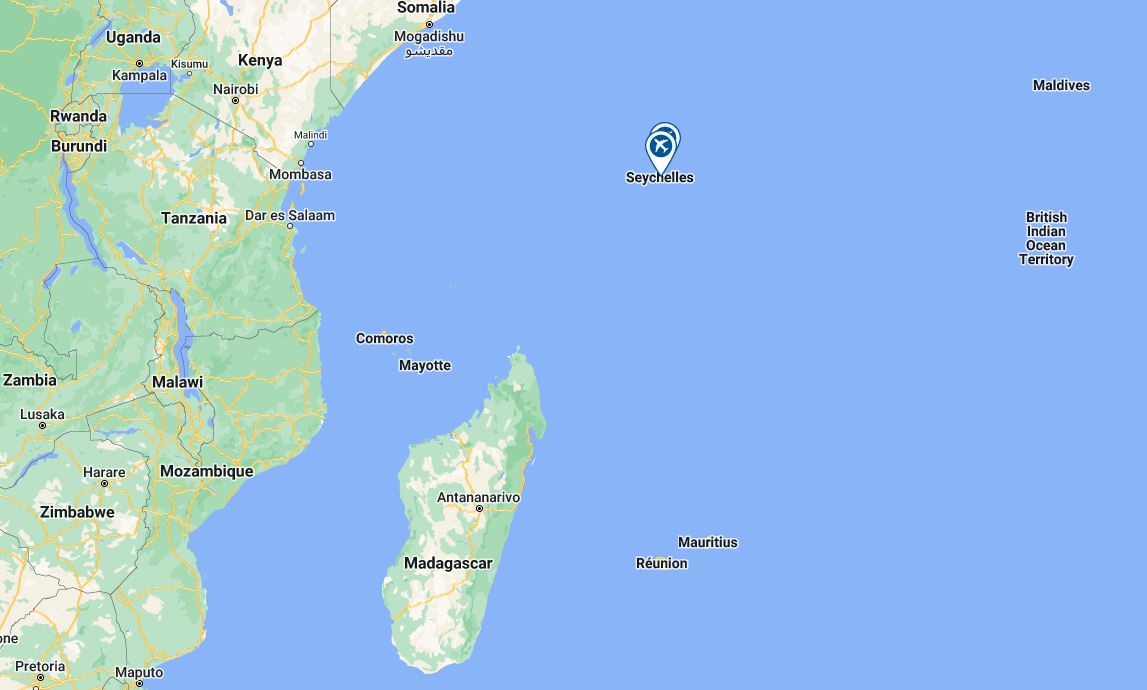 The chart below shows how tourism grew consistently from 2010 to 2019, if not steadily, varying from year to year between +1% and +19%. The overall growth rate during that period was +9.5%.

Most tourists from Western Europe

While the statistical distribution of tourists remained broadly the same in 2020 and 2021, it is most useful to consider the chart for 2019, which demonstrates two things.

Firstly, that approximately 45% of tourists are from comparatively wealthy European countries, such as Germany, France, the UK and Italy; those that are most likely to have the greatest amount of disposable income.

Secondly, that more than 50% of the total comes from ‘other countries’, suggesting that despite its cachet as a ‘five-star’ destination, the appeal of the Seychelles is widespread.

Visitor arrivals in the Seychelles, by market, for 2019

The increase in tourism in the first months of 2022 coincided with the relaxation of COVID-related entry restrictions in Mar-2022. No tests are required for fully vaccinated passengers, but a Health Travel Authorisation must be applied for before departure. Visitors must also stay in ‘approved accommodation.’

There is no consistency to the reporting of cases, no waves or peaks and troughs. During the past six months the number of cases has varied as widely as 0 to 2000 a day.

Seat capacity overall has improved, and as of the week commencing 23-May-2022 it came very close to the level achieved in the same week of 2019.

One problem the country could do without is a rise in drug-related crime that predated the pandemic and may have worsened since, with opportunistic thefts directed at tourists as well as residents.

The other main influence is the decision taken in 2018 by Air Seychelles to cancel some long haul flights – notably the one between Seychelles International Airport (SEZ) and Paris Charles de Gaulle Airport (CDG).

The SEZ-CDG route made up 30% of the airline’s passenger revenue at the time.

It signalled a downscaling of the airline's ambition in the hope that other airlines would fill the European gap, which they initially did. British Airways, Air France’s then subsidiary Joon, and Edelweiss Air increased capacity enormously helping to drive down prices (although that is not necessarily what the government wished for).

Air Seychelles remains the largest airline at present, with 32% of capacity and more than 70% of movements, but its role has become a niche, tourism-supporting one.

The airline has only five international routes, two of them connecting it with other tourist islands, namely Mauritius and the Maldives. Additionally, it serves Johannesburg – South Africa having been a significant supplier of tourism in the past – and also Mumbai and Tel Aviv.

There are approximately 10,000 expat Indians on the islands, working in various touristic and administrative capacities.

At one time such a diminution of its role could have been problematic, but a series of airlines with global networks situated in the Middle East and Europe/West Asia now provide a degree of capacity which ensures that the Seychelles are accessible from just about anywhere, and frequently with only one change of aircraft.

That is evident from the route map below, as is the realisation that direct flights from Europe, the Americas and Asia Pacific, while desirable, are not actually necessary.

Seychelles International Airport: network map for the week commencing 23-May-2022 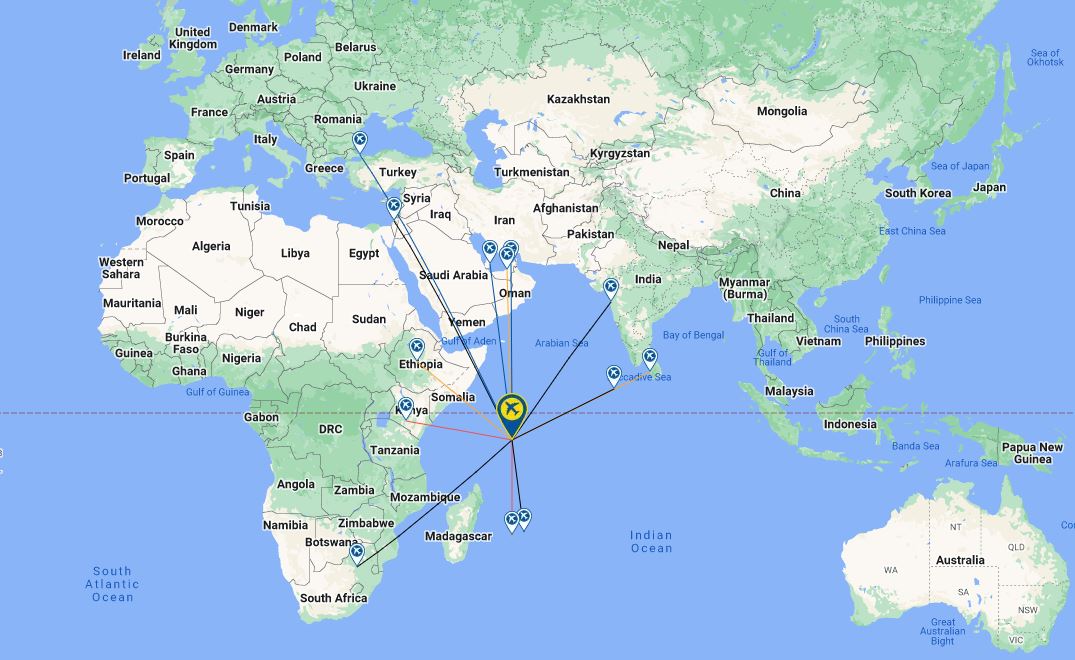 The COVID-19 pandemic is unlikely to be at the forefront of thinking over the currency of the master plan (50 years).

A major upgrade for the airport to cater to the anticipated increase in traffic was unveiled earlier this year by Garry Albert, chief executive of the Seychelles Civil Aviation Authority (SCAA). It coincided with the 50th anniversary of the airport's opening, on 20-Mar-1972, by Queen Elizabeth II during the British colonial era.

The upgrade followed the approval of the Cabinet for a revision in a previous airport master plan made in 2009 making way for major development and extension of the airport. The plan was designed by the Singaporean firm CPJ Corporation, which also worked on Singapore's Changi Airport.

This plan was based on data and forecasts made during that time that have been overtaken by events, even if – hopefully – not for much longer.

The government is said to be currently in discussions with an international partner, although the details have to remain confidential due to the agreement Seychelles has with them.

As if seemingly aware of the problems some major airport developments have experienced in recent years, Transport Minister Derjaques indicated that once the master plan was approved, work would have to go ahead quickly, because there is a lot of engineering work that will need to be carried out to address issues of flooding, drainage, electrical and utilities associated with a big project.

It appears that flooding is an acute problem in a constituency close to the airport.

The location is known as Zone 21 and could be used for aircraft parking; a new general aviation terminal; a new airport hotel; a new cargo terminal and catering facility; or for non-aviation commercial purposes. 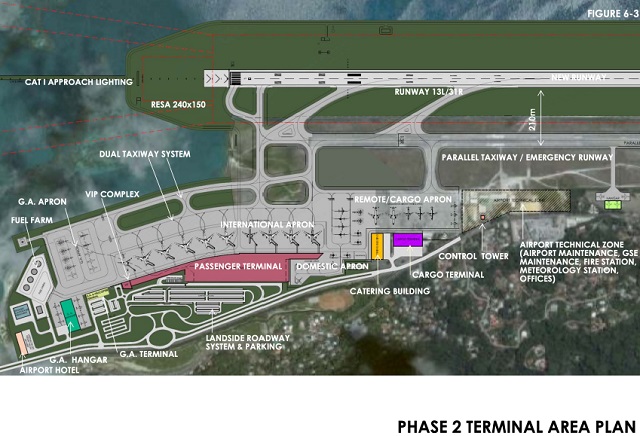 There is no known intention to extend the runway or add a second one. The local topography might make that difficult without resorting to landfill for further reclamation.

Opportunities for the private sector

Probably the most intriguing comment the Minister made was almost as an afterthought, when he stated that the airport’s expansion would be funded through public and private funding. There was no indication as to whether that comment referred to domestic partners or international ones, or whether it had any relation to previous remarks about an international partner.

The construction and operation of an international terminal would almost certainly attract regular investors from the airport sector community if tourism was seen to pick up again quickly, while specialists might also be attracted to cargo and/or general aviation terminals.

The investment required will be between USD50 million and USD100 million to achieve a “five-star facility” to accompany the five-star hotels.