Singapore Airlines (SIA) LCC subsidiary Scoot is launching five new destinations as part of the first phase of expansion following the completion of its merger with Tigerair. Scoot also plans to add capacity and adjust schedules to several of its existing 60 destinations in a bid to improve connectivity and grow transit traffic.

Scoot plans to add Harbin, Honolulu, Kuching and Palembang in 4Q2017 followed by Kuantan in early 2018. Scoot expects to announce more new destinations over the next several months, including a second destination in Europe and additional destinations in India.

Scoot and Tigerair completed a merger on 25-Jul-2017, resulting in a single brand (Scoot) and a single operator certificate (Tigerair). The SIA Group initially unveiled plans in Nov-2016 to merge Scoot and Tigerair by the end of 2017.

The two airlines have been operating under a single management team and company, Budget Aviation Holdings, since early 2016. Scoot has been wholly owned by the SIA Group since it launched services in Jun-2012 while SIA Group took over full ownership and delisted Tiger Airways Holdings in early 2016.

Scoot has another six 787s on order, including two -8s and four -9s, and commitments for 39 A320neos. The airline also has 12 A320ceos that are now subleased to Indian LCC IndiGo. These aircraft are all coming off sublease by early 2019 – and nearly all of them will be added back to the Scoot operating fleet.

The six additional A320s by mid 2018 is a net figure taking into account a mix of A320ceos returning from IndiGo, the delivery of new A320neos and A320ceo lease returns. Scoot plans to begin taking delivery of its first A320neo in late 2018 or early 2019.

All 12 of the A320ceos subleased to IndiGo will be handed back to Scoot by mid 2019 – with the first re-delivery slated for 4Q2017. However, Scoot has arranged to return a small portion of this fleet to leasing companies while most of the fleet will rejoin the Tigerair operating certificate.

Scoot to gradually phase out its A320ceos

Scoot plans to return all its leased A319/A320ceos as the end of their 12 year leases, including the aircraft subleased to IndiGo. According to the CAPA Fleet Database, only four of the 23 A320 family aircraft currently under the Tigerair oprerating certificate are owned while 19 aircraft are leased.

Of the 21 leased A320s now operated by Scoot, two have leases expiring in early 2018. These are the oldest aircraft in the Scoot fleet and are currently 11 years old.

The remaining 19 leased A320s have leases expiring in 2022 to 2025 as they were delivered in 2010 to 2013. The two A319s were delivered in 2009 and have leases expiring in 2021. The average age of the A320 family aircraft currently under the Tigerair operator certificate is slightly over six years while the average age of the 787 fleet is less than two years. (As explained earlier in this report, Scoot is the surviving brand from the just completed merger while Tigerair is the surviving operating certificate and all flights are therefore operated under the TR code.) 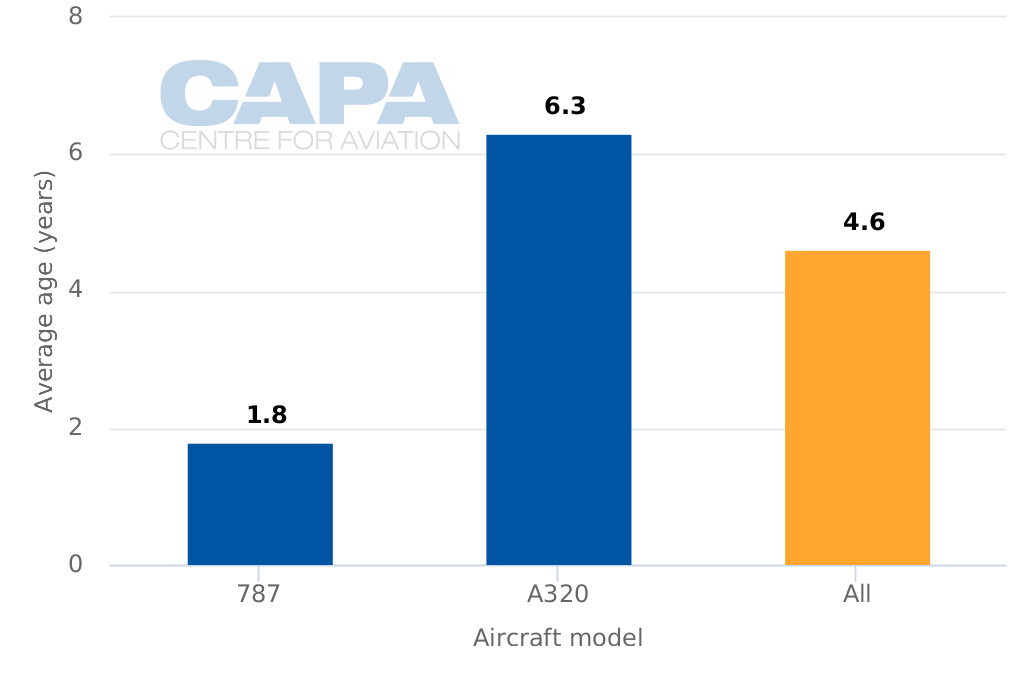 The 12 A320s subleased to IndiGo (and now under IndiGo’s operator certificate) were initially delivered to Tigerair in 2011 to 2013. Therefore, their leases would normally have leases expiring in 2023 to 2025, or several years after the subleased with Indigo end. However, at least one of these aircraft will be returned when the sublease ends.

Scoot plans to double the fleet in five years: “We are definitely on an aggressive growth path"

Scoot has not divulged details of its fleet plan but stated at a 25-Jul-2017 event celebrating the completion of the merger with Tigerair that it plans to double the fleet over the next five years. “We are definitely on an aggressive growth path,” said Scoot CEO Lee Lik Hsin.

Based on the current lease expire dates, Scoot will still be operating up to 29 A320ceos in mid-2022 (slightly fewer if more early lease returns are negotiated). The current Scoot fleet plan envisions 20 787s in 2022 – although the airline plans to look in a couple of years at exercising an option to further expand the 787 fleet beyond 20 aircraft using 787 orders now earmarked for SIA the parent airline.

When Tigerair first announced its A320neo order in Mar-2014, the airline stated the aircraft would be delivered from 2018 through 2025. The 2025 date for the last A320neo delivery matches with the lease return on its newest A320ceo, which was delivered in 2013.

Tigerair canceled its last nine A320ceo orders, which would have been delivered in 2014 and 2015, as part of the A320neo order. Its initial A320neo order was 37 aircraft but Tigerair converted two A320neo options to orders in 2015 as part of a deal with Airbus that included the cancellation of two A320ceo orders that were initially assigned to Tigerair Australia. (Tigerair Australia was previously owned by Tiger Airways Holdings but is now 100% owned by Virgin Australia and is in the process of transitioning its fleet from A320s to 737-800s.)

Scoot could slow down fleet expansion but will still grow rapidly

Scoot has some flexibility with its fleet plan. If needed it could delay the target of doubling the fleet from five years to eight years by deferring A320neo deliveries.

However, this would not change the overall drive to expand rapidly over the next several years. The SIA Group is relying heavily on expansion in the budget sector of the market, where there are generally more opportunities than in its traditional premium business.

While Scoot’s long term business plan is subject to change, as is always the case, changes to the two year business plan are not likely. As outlined earlier in this report, the two year plan envisions significant growth at Scoot as the widebody fleet expands from 14 to 20 aircraft and the narrowbody fleet expands from 23 to 29 aircraft. Scoot has already completed a new network plan that makes full use of the 12 aircraft being added over the next two years.

Scoot unveiled plans on 25-Jul-2017 to grow its network from 60 to 65 destinations with the launch of Harbin, Honolulu, Kuantan, Kuching and Palembang. Several more destinations are in the pipeline for 2018 including additional destinations in India and a second destination in Europe. Scoot’s network is expected to exceed 70 destinations by mid-2019, at which point the fleet will consist of 49 aircraft.

CAPA will review the network plan in more detail, including the five new routes, in Part 2 of this report.